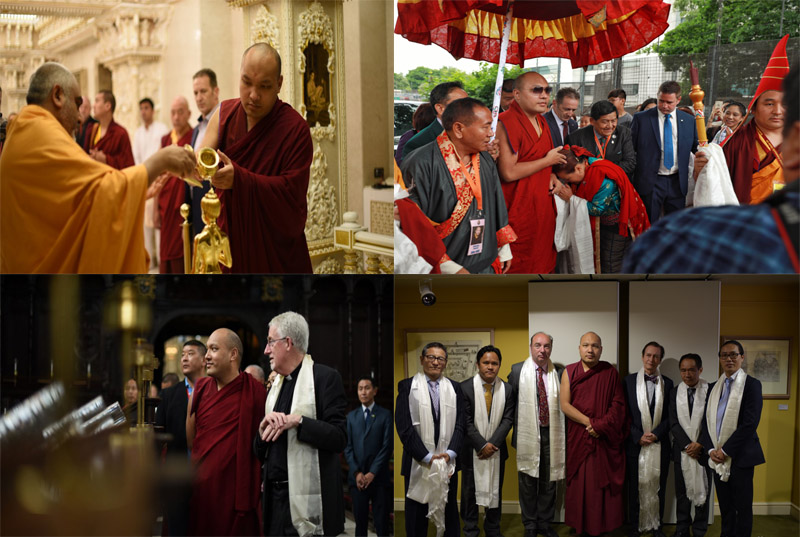 London, UK — "Free from concretizing the eight worldly concerns, we train our mind in the illusion-like outlook that sees things as not real," the 17th Karmapa said during his first trip to the UK, Through training our mind, "our compassion and patience increase and our minds open up."

The 17th Karmapa, Ogyen Trinley Dorje, was received with anticipation and delight on his first visit to the United Kingdom on May 17th, 2017. His arrival in central London was received by numeral devotees and included a special reception with traditional English afternoon tea.

The visit had been highly anticipated by Karmapa himself, especially due to the strong dharmic connection between the United Kingdom and the Karmapa lineage, believed to be established earlier by the 16th Karmapa, Rangjung Rigpe Dorje. On May 18th, Karmapa visited the British Museum where some of the most crucial documents and artifacts in the history and culture of human beings has been displayed, including the Magna Carta, the Rosetta Stone, the key to deciphering Egyptian hieroglyphs, statues of Manjushri, Vajrasattva, and Akshobhya who specifically is an important figure for the Karmapa.

On May 20th, the spiritual leader began teaching his Eight Verses for Training the Mind at the Battersea Evolution in London. According to the Karmapa, the Kadampa tradition confers immense importance to the activity of mind training. "Mind training really means training in bodhicitta." While the word 'Bodhi' means awakening, the word 'citta' means mind, hence, the Karmapa states that the word mind refers to bochicitta or the mind of enlightenment. Such mind training texts provide a guide for others to follow and comprehensively synopsize the main points of training in bodhicitta in order for one to develop it gradually. The purpose of the eight verses for training the mind, according to the Karmapa, is to broaden our minds and hearts to make them more encompassing. Furthermore, it helps us differentiate between the conducive and the unfavorable conditions for developing love and compassion, which should help an individual minimize his unfavorable conditions and increase his favorable conditions.

Thinking that all sentient beings Surpass a wish-fulfilling jewel For accomplishing the supreme aim, May I always cherish beings.

In explaining the meaning of the first verse, Karmapa says, "The example often given is that of a diamond in the earth. Initially it is covered by mud and earth. But this has no effect on the inherent value of the diamond. In the same way there are many kinds of sentient beings and they all possess different flaws, but these flaws have no effect on the inherent, high value of sentient beings. Their basic nature remains worthy of being cherished."

Offering his advice, the Karmapa counseled, "We need to have a plan in place for how we will deal with any given situation. If we let the mind go where it wants to go, it will turn stubborn. There is a saying in Tibetan: 'Appearances are skilled at deception and the mind is like a small child following after them.' Instead of letting the mind be fooled by appearances, we should take care of it like a small child, not letting it do whatever it wants; rather, we should examine carefully to discover the state of our mind." Whenever I see beings of ill character Weighed down by harsh misdeeds and suffering, As if I had discovered a treasury of precious jewels, May I cherish them as something difficult to find.

Continuing teaching the verses, the Karmapa begins by explaining that the fourth verse is about three different kinds of people, those whose character is negative, those who are weighed down by significant misdeeds, and those who suffer or experience suffering.

"Main point," He summarized," is that on the path of the bodhisattva when we are helping others, we will connect with a wide variety of people. Encountering any of these three types, we might try to steer clear of them. Without habit of training already in place, it will be difficult to connect with them and squarely face their situation. This practice is challenging. Usually when others scold or insult us, we cannot take the blame they heap on us. They point a finger at us and we point a finger elsewhere. We find it difficult to accept that something was really our fault or due to a flaw within us. We become so overwhelmed by an emotional reaction that we are unable to turn our attention inward, and so we look outward, shifting the blame to others.To counteract our evasions, we practice taking defeat upon ourselves and giving victory to others—a famous piece of advice often found in the oral instructions of the Kadampa."

As a conclusion, Karmapa mentions that Compassion and Emptiness are the two keys that aid one in the process of training their mind, "In general, however, it would be extremely difficult to bear physically in a single body the suffering of all living beings, and so we mainly use tonglen as a method to work with our minds, training them to become so courageous that we do not become discouraged or rigid and can fearlessly meet others' suffering. Through this, our compassion and patience increase and our minds open up. When we follow after our routine thoughts and old habits, it is difficult for fresh intelligence to take birth. Understanding emptiness helps us to let go of ego-fixation that reifies our experience; it allows us to return to freshness, to the very basis of who we are."

On May 23rd, post the teaching sessions of the Karmapa, He visited the Royal Asiatic Society and spoke with members of the Tibet Society, regarding the environment, and even addressed a group of people introducing them to His organization, Khoryug, which advocates for environmental protection in the Himalayan region, along with education nuns and monks to further raise awareness about this pivotal issue. He stated, "When it comes to protecting the environment of Tibet," the Karmapa remarked, "one of the best sources to consult is the Tibetan people themselves, as they have related to it for thousands of years. Knowing it inside and out, they naturally understand how to create a sustainable environment. Their whole hearts and minds are invested there. The Tibetans' traditional approach to the environment sees it as a sacred field inhabited by gods and spirits. Their outlook has great sincerity and respect for their natural world."

On May 24th, He travelled to Cambridge where he attended a seminar on animal welfare science and animal sentience, and the significance of their relationship with the treatment of animals. He claimed that, "Much of the terrible suffering endured by animals at our hands is caused by ignorance. It is therefore very important that we tell people about the depth of their awareness and their capacity to feel pain and fear, so that we can improve their lives and avoid violence towards them."

On 25th May, the 17th Karmapa visited the BAPS Swaminarayan Mandir, which is the largest Hindu temple in Europe. Here, He attended an exhibition to understand Hinduism, along with participating in prayers with the swami and other priests!

On May 27th at the Lakeside International Hotel in Frimley Green was the concluding ceremony of the Karmapa's first visit to the United Kingdom. As his concluding remarks, He states, "That this visit to the UK has finally happened has been a cause of great joy for me. On the other hand, the bombing in Manchester, that terrible tragedy in which many people, but especially many young people, lost their lives has caused me great pain and sadness. I think we find ourselves at an interesting moment in time, where different types of joy and different types of sorrow occur simultaneously. I consider it meaningful that we have been through these experiences together. It is my hope and aspiration that we can continue in this way, sharing the joys and sorrows of others, and of all sentient beings. Seeing that our joys and sorrows are part of others' experiences and that the joys and sorrows of others are a part of our own experience, I hope that we can continue being empathetic towards each other and can persevere into the future with great strength of heart and courage."