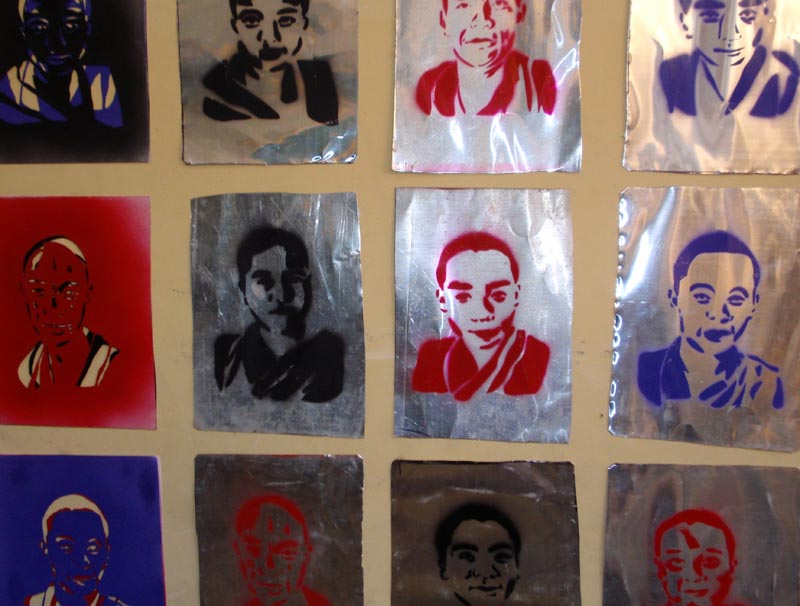 Dharamshala: Nestled against the cliff off an alley leading down from McLeod Ganj's main square, the Tsechokling Monastery generally goes unknown to those who have no specific business there; its location seems like it was chosen for secrecy. On Wednesday October 22, however, Tsechokling's secret was out, as it opened its doors to locals and foreigners alike for a one-day mixed media art exhibition organized by the Half Moon Project entitled "Inner Reflections: A Creative Journey through Art by Tibetan Buddhist Child Monks of Tsechokling Monastery."

After the ten minute walk that winds down stairs through the monastery grounds, visitors reached the gallery space where they were greeted by a matrix of striking, stencil portraits of monks spray-painted on silver metallic surfaces. Stark and powerful, upon initial viewing visitors thought the portraits may be a tribute to Tibetan political prisoners, though soon learned they were self-portraits created by the child monks themselves.

The gallery space itself was a simple square room with west-facing windows that, late in the day, illuminated the art, giving it a mystical, glowing quality. The exhibition was divided into themes including monastic life, personal connections to Buddhism, visions of an ideal society, and aspirations for the future. "Value: Respect," a collaborative diptych painting by Ngawang (13), Thupten (15), Sangay (12), and Mingmar (16), depicts a contented child monk seated in the left panel, then prostrating before a shrine on the right. As monastic residents, meditation and prostration are integral activities in the child monks' daily lives. 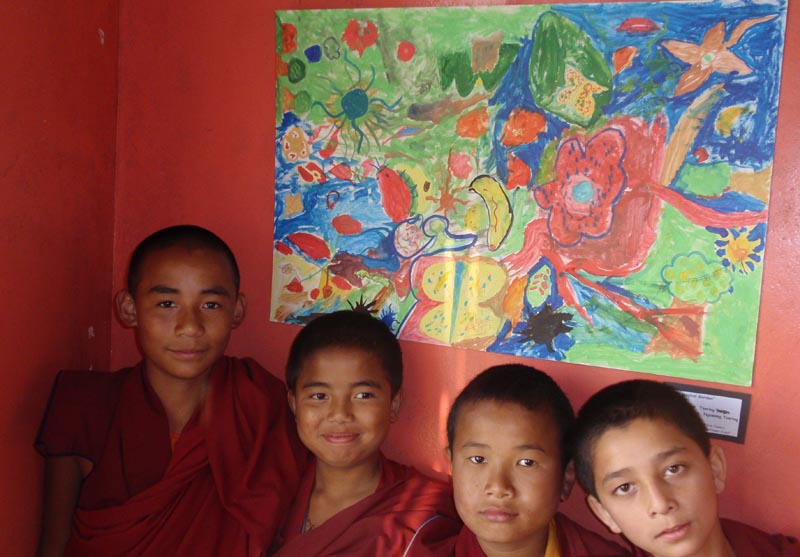 For two months, three facilitators ran 3½ hour daily workshops wherein they introduced the young monks to various artistic media (including paint, clay, stencil, and pin-hole photography in anticipation of the exhibition. "The Magical Garden," a collaborative painting by four of the artists that depicts a fantastical scene in which plants and animals grow and thrive in harmony, hints at the vibrant colors and liberation from conventions of a Kandinsky painting. "Everything is coming together," explained Ngawang Tsering, a 13-year-old from Sikkim and one of the collaborating artists. "There are five suns, all with magical powers to make things grow," he elaborated, explaining why the insects are larger than the fruit, which are larger than the suns. "Everything grows in unconventional shapes and forms," added Priyanka Singh, one of the facilitators of the project. Of the 15 child monks at Tsechokling between the ages of 10 and 17, all nine of those who volunteered for the project come from Sikkim, Nepal, or Darjeeling. Like Ngawang, most come from working class families who still live in their home villages some 1,000 km away. 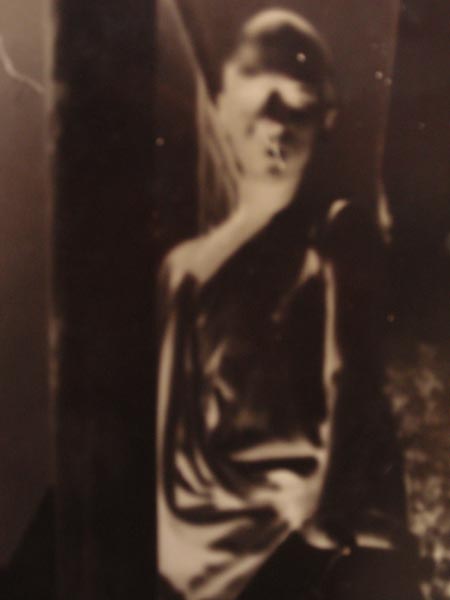 Working on a Take Off 2009 grant from His Holiness' Foundation of Universal Responsibility (FUR), the project was organized by the Half Moon Project which, its website (thehalfmoonproject.blogspot.com) explains, is an arts initiative committed to providing "child monks with a means to express their experiences of Tibetan monastic life and spirituality." Based on the belief in the power of art to transcend social, cultural, and economic barriers, the organization is comprised of three individuals that are deeply dedicated to unlocking the artistic potential of young monks: Priyanka Singh, a documentary photographer based in Delhi, Tenzin Wangden, a residential monk and teacher at the monastery, and Sonia Tomasiello a creative arts therapist. This year's FUR Take Off grants were given specifically to commemorate fifty years of Tibetan exile in India, a perfect match for the Half Moon Project.

"Our intention was to give the children a chance to express themselves. We are very impressed with their work," said Wangden, who has been at Tsechokling since 1986. Last year ten Take Off grants were awarded to individual artists working in a variety of media. This was the first given to an organization working specifically with child monks. Sometime in 2010, these youngsters' art will be part of a larger collective exhibition in Delhi.