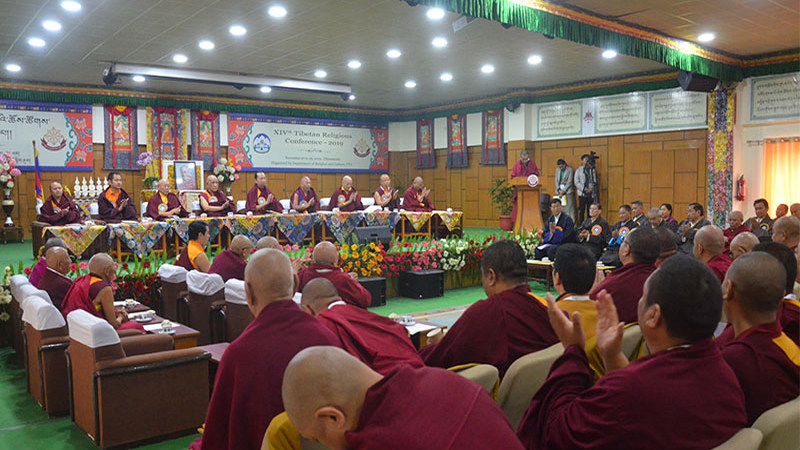 Dharamshala, India — Top Tibetan religious leaders gathered for the 14th Tibetan Religious Conference in Dharamshala, India this week have affirmed His Holiness the Dalai Lama’s sole authority in his reincarnation and illegitimises China’s meddling in religious affairs of Tibet. The Conference convened produced the special “Dharamsala Declaration” that backing the traditional history of the reincarnation of the Dalai Lama.

Top Tibetan religious leaders representing all the schools of Tibetan Buddhism attended the 14th Tibetan Religious Conference at the seat of the Tibetan Government in-Exile in Dharamshala in northern India on Wednesday, November 27, 2019.

Among the key issues tabled for discussion is the increasingly contentious issue of the lineage of the Dalai Lama, and one of the objective for this year’s forum is to draw up a plan of action on the matter. The Tibetan Religious Conference is held every three years.

In addition the continuation of the Dalai Lama lineage, the three-day gathering, from 27–29 November, 2019, in Dharamshala, India, will examine issues related to harmony between different schools of Tibetan Buddhism, the preservation of the Vajrayana spiritual tradition and its rich culture, and the topic of exile as an avenue of change and growth for the Tibetan people.

Ever since 1969, when asked about his next reincarnation, His Holiness the Dalai Lama has told the international media that it was a matter to be decided by the Tibetan people. As it stands now, it is important for the Tibetan people to enact a legitimate stand on the Dalai Lama’s reincarnation. In that light, a necessary special resolution on reincarnation was passed at the 14th Tibetan Religious Conference which began today at the headquarters of the Central Tibetan Administration (CTA). The conference is being organised by the Department of Religion and Culture, CTA.

In a special resolution, the delegates at the conference on Wednesday issued a formal statement on the matter of the Dalai Lama lineage in the “Dharamsala Declaration,” composed of the following resolutions:

Other eminent Tibetan rinpoches and tulkus, representatives and lamas from the Himalayan region, Khen Rinpoches of major Tibetan Buddhist institutes in exile, heads and members of Tibetan monastic institutes and representatives of Tibetan nunneries were present among the 100-strong participants. Dignitaries of the Tibetan Administration including the heads of three pillars of Democracy, Kalons, and Members of the Tibetan Parliament in Exile attended the inaugural ceremony.

The conference will focus on enabling extensive participation of the religious heads and other important figures of Tibetan Buddhism in the discussion and decision making on the overarching significance of Tibetan tradition of recognising the reincarnation of scholar-adepts with a particular emphasis on the discovery and recognition of the reincarnation of His Holiness the Dalai Lama.

Addressing the inaugural session of the conference, Sikyong Dr. Lobsang Sangay apprised on the resolutions passed in the recently held 3rd Special General Meeting of Tibetans whereby it was declared that the exclusive right and the power regarding the discovery and recognition of reincarnations of His Holiness the Dalai Lama lies in His Holiness himself and the Gaden Phodrang Trust of the Dalai Lama. And any effort being made by China via its Order no 5 will be outrightly considered as invalid as per the resolution adopted.

Sikyong then notified on the alarming meddling of China in the reincarnation of His Holiness the Dalai Lama not only through its implementation of Order no 5 but by threatening and putting pressures on India against interfering in the selection of next Dalai Lama.

“China’s extreme hostility towards religious freedom in Tibet is totally unacceptable to us and likewise, we vehemently reject any advancement of China’s interferences in the process of the reincarnation system. If any, It should be for the Tibetans to decide and defend” said Sikyong Dr Lobsang Sangay.

“Though China continues to put pressure on India, India’s consistent generosity and kindness towards Tibetans have always been the same” added Sikyong. Remarking on the recent visit of Senator Brownback, US Ambassador for Religious Freedom, Sikyong said that the US fully supports and favours the Tibetan Buddhist system of selecting the successors.

“The US government has officially stated its support for the Tibetan people’s religious freedom to select, educate and venerate their religious leaders without state interferences,” said the democratically elected leader of the Tibetans in exile.

Kalon for Religion and Culture, Ven Karma Gelek Yuthok, in his opening remarks, explained the recent steps taken to change the title of the conference. He expressed his appreciation and confidence that this conference in its optimum capacity will deliver fruitful results.