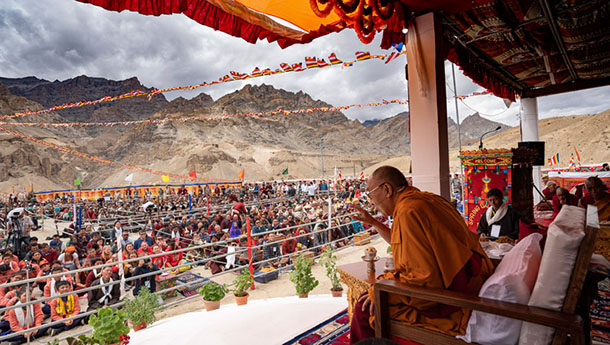 His Holiness the Dalai Lama speaking to students, staff, and members of the public at Spring Dales Public School in Mulbekh, Ladakh, J&K, India on July 26, 2018. Photo by Tenzin Choejor

Ladakh, J&K, India — "Those of you of the 21st century generation need to take account of the whole world," His Holiness the Dalai Lama who is currently on a 19-day teaching tour in Ladakh said, adding: "Try to make this century an era of peace. Modern education should pay attention to how to develop inner peace. Just as we need to be physically fit, we need to be mentally fit as well."

'Attitudes towards the use of weapons and force to solve problems have been changed after the Second World War,' he told a crowd that gathered to hear the words of love, compassion, forgiveness, and tolerance directly from him. The Tibetan Nobel Peace Laureate said that "people began to appreciate the importance of peace," especially in these modern times.

His Holiness the Dalai Lama addressed the large crowd including students sitting on ground at Spring Dales Public School in Mulbekh, Ladakh, J&K, India on July 26, 2018. Speaking to the crowd, the Nobel Peace Laureate has stressed the need to make this a peaceful century by acknowledging that we all belong to the human community, but also remembering that peace starts on an individual level.

“We are now in the 21st century and when we look back on the last century it seems to have been filled with suffering and war. Whereas I belong to the 20th century, you students here belong to the 21st. Nowadays, we see crises in the world due to old ways of thinking—primarily the use of weapons and force to solve problems," he said, adding: "Although attitudes changed later, in the earlier part of the 20th century people were proud of their powerful armies, just as they were later proud of their nuclear weapons."

“After the Second World War, however, people began to appreciate the importance of peace. The French and German leaders, de Gaulle and Adenauer worked to establish what has become the European Union, and peace has prevailed in Europe since then as a result," the exiled Buddhist spiritual leader of Tibet said multiple times that he always admire the spirit of European Union. "This spirit of promoting the common good over narrow national interest is something I really admire."

“Also following the Second World War, an anti-nuclear movement emerged led by Japan. I’ve been to Hiroshima and Nagasaki where these shocking weapons were used. More recently, during the Iraq crisis, many people in many different parts of the world marched in protest against violence and war," he said, adding that the war could perhaps have been avoided through negotiations.

“At the time of the Iraq crisis, I was asked to go to Baghdad to mediate, but I didn’t feel I had any connections to be effective. I wrote to President Havel suggesting that a delegation of, for example, Nobel Peace Laureates, representing no government, just the interests of peace, might have been able to influence events," he stressed, saying: "I still think war could have been avoided."

“After the September 11th event in New York and Washington, I wrote to President Bush offering my prayers and condolences. I also expressed the hope that any response would be non-violent. I said, ‘Today there is one Bin Laden, but if you resort to violence and the use of force you risk creating a hundred Bin Ladens.’ Violence provokes counter violence in an unending cycle.”

“Meeting volunteers here from the Czech Republic reminded me of President Vaclav Havel, who supported such peace movements. When Czechoslovakia became independent and free of Soviet domination he invited me to the celebrations," His Holiness glowingly described President Vaclav Havel as his longtime dear friend, saying: "He was someone I really admired. His death was a great loss. We need more leaders like him."

The Nobel Peace laureate always says the best way to remember Mahatma Gandhi is to follow his messages of peace, non-violence and simple living in our daily lives. “Here in India, Mahatma Gandhi pursued the freedom struggle through non-violence. He learned how to implement the ancient Indian practice of ahimsa in a political context."

His Holiness observed that there will always be disagreements between human beings as a result of different ideas, but the way to resolve them is through dialogue. He stressed the need to make this a peaceful century by acknowledging that we all belong to the human community, but also remembering that peace starts on an individual level.

He noted that human beings are social animals and that it is love that brings us together, while anger drives us apart. Scientists have shown that where constant anger and hatred undermine our immune systems, compassion strengthens our general well-being. His Holiness remarked that this is not about the next life, heaven or nirvana. "To live more peacefully and joyfully in our day to day lives, we need a warm heart".

“These are some of the things I’ve observed. I belong to the 20th century, but those of you of the 21st century generation need to take account of the whole world. Try to make this century an era of peace. Modern education should pay attention to how to develop inner peace. Just as we need to be physically fit, we need to be mentally fit as well. And just as we learn to maintain physical hygiene to maintain our health, we also need emotional hygiene that involves tackling our destructive emotions.

“Many of the problems we face today are our own creation. Creating a more peaceful world requires a peaceful mind and a peaceful heart. As human brothers and sisters we must live together in tolerance and affection. One of the steps we can take is to encourage inter-religious harmony. India can show the world that it’s possible for the world’s religious traditions to live together in friendship and respect.”

His Holiness joined the Spring Dales students in singing the ‘Prayer of the Words of Truth’, following which Czech musician Iva Bittova performed a traditional Czech song.