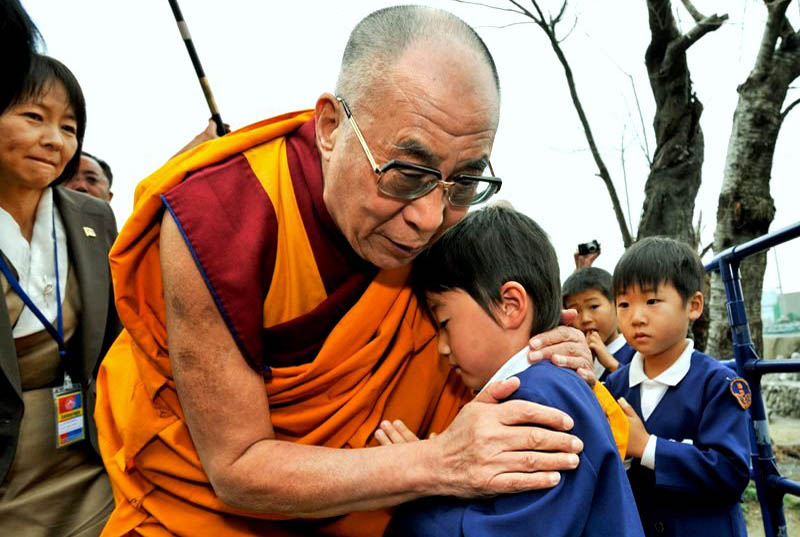 Tokyo, Japan: - The spiritual head of Tibet and Tibetan people, His Holiness the 14th Dalai Lama at the last leg of his 10-ten days visit to Japan was met by a group of Japanese Lawmakers at the hotel this morning. The group headed by the former Prime Minister Mr. Shinzo Abe greeted His Holiness the Dalai Lama and expressed gratitude for visiting the earthquake, tsunami and radiation affected regions, and for his encouraging and condolence message to the grief stricken people in the region. The lawmakers also expressed their support for His Holiness middle path approach to solve the Tibet issue and expressed their concern about the deteriorating situation in Tibet.

Later, His Holiness the Dalai Lama attended a press meeting organized by Free Press Association of Japan in Tokyo wherein about eighty journalists from major TV stations, newspapers and magazines attended the meeting. His Holiness greeted the press and said that his main purpose of visit to Japan this time was to give teachings organized by Koyasan University in Osaka and Koyasan region. Secondly, to visit the earthquake, tsunami and radiation affected areas to share the people's grief and to say that they are not alone.

Next, His Holiness explained the two important missions of his life: promotion of human value and religious harmony. "Human beings are intelligent beings capable of making positive contribution to the society, but this intelligent should be guided by right motivation based on moral ethics and values. This has nothing to do with religion. With good foundation of human values and ethics, our intelligence could be directed to making this planet a better place to live. As a common citizen of this world, I would like to work for the promotion of human values.

"Secondly, as a Buddhist monk, I am working for the promotion of religious harmony. All the major religions of the world despite some differences in philosophy, they preach the same message of love, compassion, forgiveness and togetherness. Unfortunately, we get involved in religious misunderstanding and creates disharmony. I am saying this to you because the media people have great responsibility to educate and inform the general public, you should take more initiatives in these areas to promote peace and harmony." His Holiness said.

Major questions from the journalists revolved around the repetitive self-immolation incidents occurring in Tibet. His Holiness clarified that He has fully devolved his political authority to the popularly elected leader of Tibetan people this March, and that Dalai Lama's institution now is spiritual only. "But this does not mean that I have resigned from Dalai Lama.

The institution has reverted back to what it was during First to Fourth Dalai Lama in early history. I am committed to democracy. Personally, I feel that these self-immolation incidents should be viewed deeply from political, religious and philosophical point of view. Even after sixty years of Chinese rule, these incidents show the real situation in Tibet. These are desperate acts by people seeking justice and freedom. Chinese leaderships should take this seriously and try to solve the people's grievances. They should accept the reality, reality is that there is human rights problem in Tibet, religious and cultural oppression is going on, and there is environmental destruction in Tibet. Is this liberation or occupation? Instead of my accepting my words, media people should visit Tibet and investigate the truth." Said His Holiness the Dalai Lama.

Amidst the cheers and standing ovation, His Holiness the Dalai Lama left the press venue. Later, in the afternoon, Japanese monks and general public and Tibetans flocked at the hotel to see His Holiness leave for his next journey to Mongolia.

His Holiness the Dalai Lama's ten-days visit concluded successfully, everywhere he was received by the general public warmheartedly and in great respect in long rows and folded hands. His Holiness conferred Dorying [Vajradhattu] initiation to some 800 monks and general public at the most Japanese sacred pilgrimage site of Mount Koya. He interacted with Japanese and Russian scientists on the subject of religion, life and universe.

Visit to the Earthquake, tsunami and radiation affected was greatly appreciated by the public and mass media. Many people cried holding His Holiness' hand and hugging him. Talk and discussion with young school children inspired the young minds to have a greater vision beyond national boundary. His meeting with press clarified his position as Dalai Lama and total devolution of political authority to the elected leader.