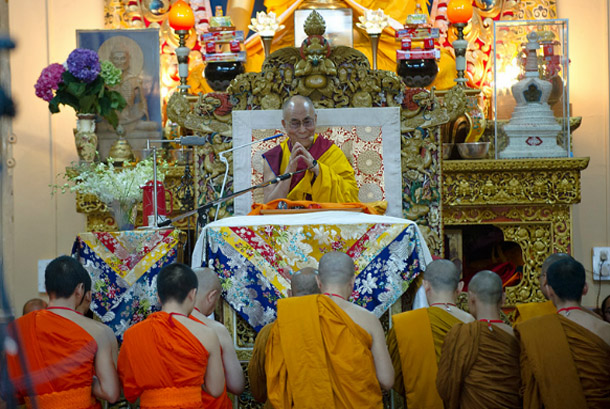 Dharamshala: -During the morning session of the first day, September 4, 2012, His Holiness the Dalai Lama began his three day teaching on Shantideva's "A Guide to the Bodhisattva's Way of Life" at the main Tibetan Temple in Dharamshala, India. His Holiness will continue from the 5th chapter of Shantideva's book.

Thousands of devotees, including new arrivals from Tibet as well as foreigners, are attending the three-day teachings. A large number of Southeast Asians in particular are in attendance.

"Whenever I give a talk, I always feel I am talking to another human being, no differences, entire six billion human beings, we are same, mentally, emotionally and physically, we are same. If I keep mental attitude as I am a Tibetan and Buddhist, immediately it creates some kind of barrier. This attitude from different religious beliefs, different races and nationality is secondary, what is the important to have it, we are also same human being on this planet, isn't it?" said His Holiness.

"Therefore, like global warming, no discrimination nor that believer or this nation when some natural disaster happened, we all suffer same when something bad occurred, and when something good happened, everybody get benefit. So, I think, many problems which are essentially our own created problem," His Holiness said.

"All of these problems are not created by an attitude of that oneness of humanity, but, from having an attitude; I am Asian, I am Buddhist, I am Christian or I am non-believer, making differences is a secondary level, basically we all are same, whether believer or non-believer, whether this nationality or that nationality, we all born same as well as die same, day by day, we sleep and eat same, and our emotions are also same" His Holiness continued.

"Hardly there is no bases to make discriminations, that actually was taught by Bodhicitta; all sentient beings want a happy life and happiness, all sentient beings have every rights to achieve that," His Holiness said. "Since we are same, my own kinds of certain experiences through training and awareness, many you also used to have it, because of we are same."

During the teachings, His Holiness stated that one cannot enjoy life happily while avoiding friends. He also said the source of good health and happiness depends on a positive mental attitude. "Religions are meant for happy life and happiness, as well as economy development."

His Holiness said, "We seek economy development or progress, not because of the money is so dear or respected, but we want happiness as individual and national level, therefore the material development also meant for that [Happiness]."

"When there is material advancement and you have a lots of money, if these could actually overcome our suffering, there should be a case, then rich people should not have any sufferings, but that is not the case at all, I have some friends, who are very rich, but they are unhappy with full of worries, they feel very lonely deep in their hearts. Therefore, even you may be very rich, this can not show your love," he added.

"Since material rich can not give any love, they can not give you love and you also not feel love for them, so, love has to come as interaction between two sentient beings who have mind." His Holiness also said that "with wealth, your love actually can not be increased. Therefore, people only materially stick their attitude, then they also lose their love and compassion toward other beings, and others even appear to be as their enemies, so they remain lonely and unhappy, this is something that we can see today's world."

"So being honest automatically brings transparent, self-confidence and real power....., therefore, material development alone can not give you happiness, this is very clear in today's world, even scientifically, it is very clear that you can not overcome suffering by taking some medicine or drugs," His Holiness stated that the most important thing to have good health is to have peace of mind. He said "the scientists are not talking about the next life or God.....but, they are talking about a good health in this life, so peace of mind is very essential."

The Nobel Peace laureate said that human beings are social animals, and a concern for each other is the very basis of our life together. "We all depend on each other, only few among the animals come together when there is a meeting time comes......but usually they don't live in herds....then some animals even live alone. Then other wild animals like ants or honey bees and monkeys, they live together as groups in herds.....so, we, human beings are also social animals, because of, we live as together in groups."

"Since, so long as we live in groups, then the forces bring us together, is mainly love and compassion, because, we have to depend on one and other biologically.....and this is sustained by love living together in groups." His Holiness stated that, if you build up an animal city, don't love each other, then the group also disposed....so they can live together because of love."

"In order live together, the most important thing is, we have to be able to have trust in one another, sense of genuine friendship." His Holiness said that for that we must need "honesty." His Holiness said, "today's world is starting to become aware that peace of mind is very very crucial. For society, people be able to see this, how do we cultivate the peace of mind, can not be done by operation or surgery and not by medication nor brainwashing others."

"Therefore, what we need is to know the truth, to be aware of Reality, by knowing the reality, you will be able to overcome your ignorance about it, then make transformation within yourself." His Holiness stated that the modern education system is lacking: "This is not an idea I alone have, many scientists and educators aware that the modern education system oriented towards material development alone, which means seeking happiness on the bases of material things without using mind to cultivate peace of mind." He told the crowds that people even think that this issue should be left to religious alone.

His Holiness believes that there is an essential role for compassion in the flourishing of human life and it needs to be incorporated in our daily life. He says that while the 20th century saw much scientific and technological development at the same time it also turned out to be a most violent century.

The Nobel Peace laureate feels that scientific achievement was used for destructive objectives and that this shows the limitation of material development. His Holiness therefore says human intelligence needs to be guided in a constructive manner to develop a sense of responsibility for the well-being of others."The 20th century belonged to science and technology. The present 21st century would belong to spirituality and non-violence," His Holiness the Dalai Lama told the audience.