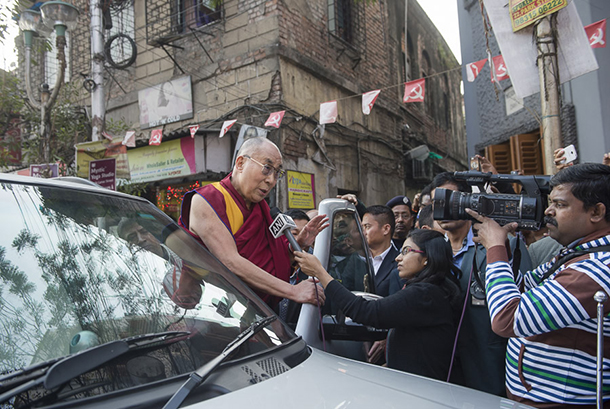 Dharamshala: - The spiritual leader of Tibet His Holiness the Dalai Lama has praised for the way the Tibetan Muslims in Kashmir have kept the Tibetan language alive in their community even after nearly six decades in exile.

"These people were Muslim by faith," His Holiness said, "but were strongly influenced by the Tibetan culture of compassion," said the 1989 Nobel Peace Prize laureate.

His comments came after he was warmly received on arrival at Netaji Subhash Chandra Bose International Airport and driven into the Kolkata city, January 12, 2015.

His first meeting was with a group of 150 Tibetans doing business in the city, including some 30 Muslims from Srinagar.

He thanked them all for coming to see him and recalled an episode from his childhood in Lhasa when a pocket watch that had belonged to the 13th Dalai Lama needed to be fixed.

A watchmaker from the Tibetan Muslim community came to repair it and as he handed it back to the young Dalai Lama solemnly warned: "The owner of a pocket watch should be as careful as someone with an egg in his pocket". Everyone laughed.

His Holiness was full of praise for the way the Tibetan Muslims in Kashmir have kept the Tibetan language alive in their community even after nearly 56 years in exile.

He expressed his admiration for the elder generation's efforts to ensure that the young still speak Tibetan fluently.

The Tibetan spiritual leader told them that he cites them as an example when he talks to Tibetans who have settled in the West, some of whom only speak English with their children.

His Holiness recalled that, perhaps as a result of famine in Ladakh, Muslims began to settle in Lhasa during the time of the 5th Dalai Lama. He allotted them land on which to construct a Mosque and they began to make their homes around it.

As His Holiness posed for photographs with this group of Tibetans, he lauded the enduring strength of spirit shown by Tibetans in Tibet.