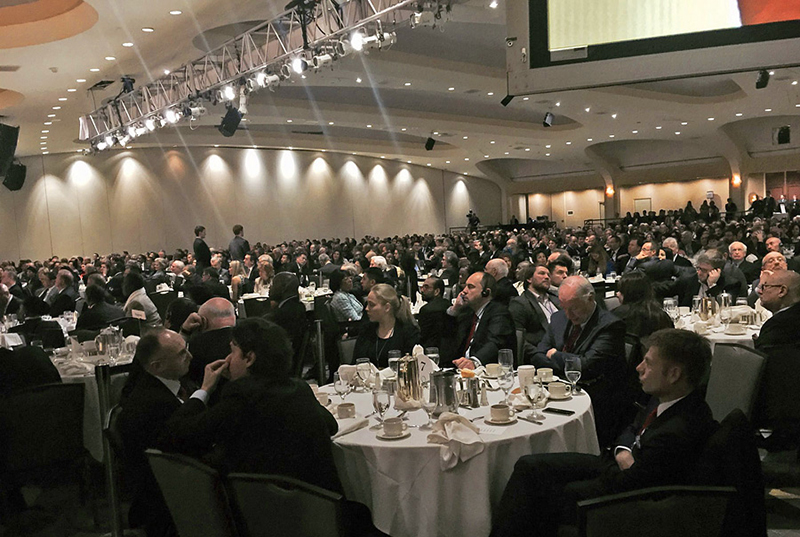 Washington, DC: - While sharing his message of religious harmony, the spiritual leader of Tibet His Holiness the Dalai Lama explained that All major religious traditions carry basically the same message, that is love, compassion, forgiveness, and tolerance to create better, happier human beings.

Congressman Jim Slattery introduced His Holiness to the gathering at the International Luncheon held annually in conjunction with the National Prayer Breakfast at the Washington Hilton, on Thursday February 4, 2015. These events function as a forum for the political, social, and business elite to assemble and build relationships.

His Holiness said "we are all human beings; we are physically, mentally and emotionally the same.  We are all born the same way and we die the same way whether we are kings, queens or beggars."

The spiritual leader added that "all 7 billion human beings want to lead a happy life and have a right to do so. If we were to think of each other in these terms there would be no basis for quarrels between us," saying "all depend on others, therefore we have to help each other."

He pointed out that climate change has shown us that we all share the same planet. And to illustrate our basic value to each other he asked his listeners to think of someone struggling to survive alone in the desert.  It would be very hard and if he then encountered someone else he would greet him simply as another human being with no regard for his nationality, faith, education or social status.

His Holiness said it is on such a basis that he thinks of himself as just another human being, not as someone special called His Holiness the 14th Dalai Lama.

He said he sees himself as part of the human community, which is why he never feels lonely. As a human being his first commitment is to helping other human beings live a happy life. That's a basis for friendship.

While sharing his thoughts on the message of all the world's major religious traditions, His Holiness explained that all convey the same message of love, forgiveness and tolerance.

"Whether you accept religion or not is a matter of personal conscience, but if you do, you should take it seriously. Despite the philosophical differences there may be between them, the aim of all our religious traditions is to create better, happier human beings."

"This is why there should be mutual respect and admiration between them. Their common aim is a basis for harmony," the spiritual leader said, while sharing his admiration towards Mother Teresa and the way her followers today continue to dedicate themselves to helping the poor and needy."

His Holiness acknowledged the continuing existence of a huge gap between rich and poor. He said that prayer alone, while it may give us confidence, will not be sufficient to solve the problem. We need to act.

Turning to the question of Islam he stressed that the word jihad has been widely misunderstood. It is not about fighting other people but refers to battling our own destructive emotions. Likewise, Muslim friends have told him that one who sheds another's blood is no longer a true Muslim. Rather than lapse into preconceptions we need instead to create a sense of harmony among our religious traditions.

He also suggested that the existence of different points of view has the stimulating effect of a positive challenge, but that they need to be expressed in a mutually respectful way.

Following this talk, Congressman Wolf was invited to say a prayer to conclude the meeting. He asked for blessings on the people of Tibet and His Holiness the Dalai Lama and prayed that freedom and liberty may yet fill Tibet.

His Holiness gave everyone present a copy of one of his books, 'The Good Heart' which records what he said when he was invited to speak at the John Main Seminar and comment on selections from the New Testament, particularly the Sermon on the Mount.