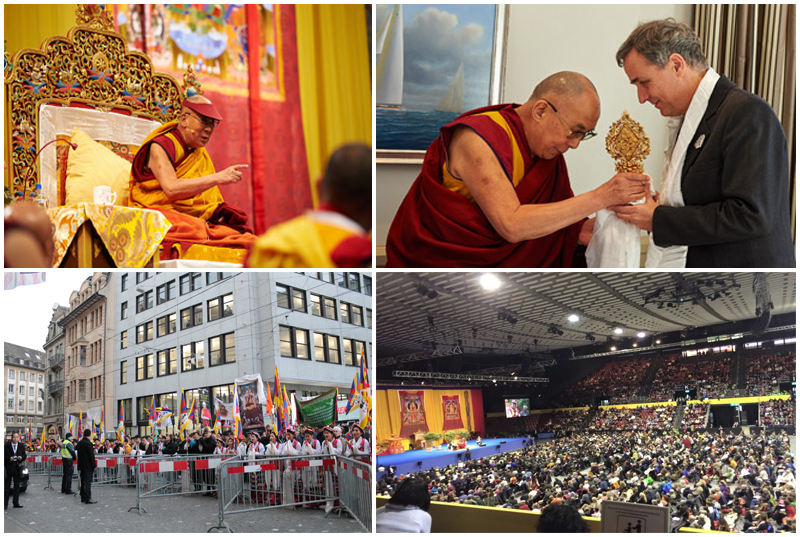 Basel, Switzerland: - The spiritual leader of Tibet His Holiness the Dalai Lama said that "it is extremely important that those of us who follow the Buddha should have faith based on knowledge of his teaching" to be a 21st century Buddhist.

Over 400 Tibetans, including representatives of Tibet organizations gave him a rousing welcome upon his arrival in Basel, Switzerland, on Saturday February 6, 2015 with traditional music, song and dance, the waving of flags and beaming smiles.

"Today, we should be 21st century Buddhists, who know what the Nalanda tradition is. When we recite the verse taking refuge in the Buddha, Dharma and Sangha, we need to understand what and who the Buddha is," His Holiness said at the St. Jakobshalle in Basel where he spoke to an audience of nearly 8,000 people on Saturday.

"If we understand the causes and conditions that result in a Buddha, we'll understand what the word 'Buddha' signifies. Likewise, the Dharma indicates the path to liberation and the Sangha those who embody it," he added.

His Holiness remarked that the dull-witted simply have faith. The sharp witted, however, research and investigate the teachings.

He cited what he had written in the colophon to the praise 'Illuminating the Threefold Faith' that invokes the qualities of the 17 Nalanda Masters.

"At the present time, when in the ordinary world there is great advancement in the fields of science and technology we are distracted by the hustle and bustle of our busy lives, it is extremely important that those of us who follow the Buddha should have faith based on knowledge of his teaching. "

Therefore, His Holiness said "we should examine the reasons for it with an unbiased and inquisitive mind, analyzing it closely.... the foremost sages of the Holy Land of India have composed numerous excellent and meaningful texts that can open the eyes of those possessing fine discriminative awareness."

"During this time more than two thousand five hundred years have passed, but still those teachings (dealing with) hearing, contemplation and meditation survive undiminished," he further added.

After morning teaching session, His Holiness met with the members of the local City-Canton Government by its President, Dr Guy Morin. The President welcomed him to Basel and told him there are currently about 600 Tibetan residents in the city. He said Basel's connection with Tibetans is so long that he can remember having a Tibetan classmate at school 40 years ago.

His Holiness presented Dr Guy Morin, with a gift during his meeting with members of the local City-Canton Government. This is the second time His Holiness has visited Basel, the ancient European city.

His Holiness also held a short meeting with about 200 elderly and frail Tibetans. He told them that since they had spent their lives trying not to harm others and trying to develop the awakening mind of bodhichitta, as he himself does every day, they should relax and feel at ease.

His Holiness commented that Tibetans have a special connection with Avalokiteshvara. He added that although Tibetans tended to squabble among themselves when Tibet was free, now the difficulties they face have brought about a firm unity.