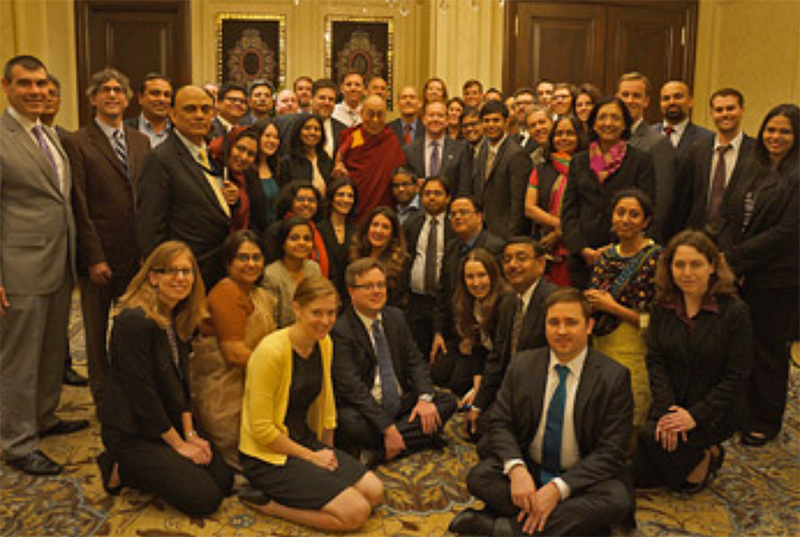 New Delhi – Chinese authorities interest would be more convincing if they found and recognised reincarnations of Mao and Deng before concerning themselves with the Dalai Lamas said His Holiness when speaking to US diplomats posted in eight countries who had gathered together in New Delhi for a workshop.

"I often make clear my view that the USA is the leading nation of the free world. On one of my previous visits there, on the flight from Europe to America, I read a newspaper article that suggested the US economy was in decline, while the Chinese economy was on the rise," he told them on Thursday, March 19, 2015.

"I mentioned my concern about the effects this could have across the free world to President Obama. He told me not to worry, that the US economy was still stronger than some people make out and still stronger than the Chinese, which brought me some relief," he added.

"India too is very important as the world's most populous democracy. It's a complex country that has shown that living in religious harmony is a real possibility. Finally, Japan is Asia's most industrialized democracy, he said.  Adding, "Relations between these three countries are very important, which is not to cast aspersions on China. I believe China will eventually join the free world, but it may take some decades yet."

Answering questions he invited from the floor, His Holiness explained that while it seems that atheist Chinese communists seem more interested in his reincarnation than he is, their interest would be more convincing if they found and recognised Mao's and Deng's reincarnations before concerning themselves with the Dalai Lama's.

His Holiness also repeated what he said in 1969 that whether or not there is another Dalai Lama will depend on the wishes of the Tibetan people.

Regarding the impact recent events have had on the Tibetan people and their traditions he said it was too early to say. He warned, however, against becoming too attached to your own tradition, which can lead to partisan divisions into 'us' and 'them', with destructive consequences.

He asked his listeners to look at the conflict between Sunnis and Shias in several Muslim countries. Chuckling he remarked that even among Tibetan Buddhists there are such divisions, with the Shugden group accusing him of being a 'false Dalai Lama'.

He narrated how they had made a placard of a photograph of him wearing a Muslim skullcap, which they explained as showing he is a Muslim not a Buddhist. His own explanation is that he likes to visit other people's places of worship and that it is properly respectful to cover your head when you visit a mosque.

"I too mistakenly propitiated Dolgyal from 1951 until 1970. Then I undertook investigations that revealed that the 5th Dalai Lama had rejected it as an evil spirit. I realised that if I followed the Shugden peoples' way, I would truly have been a 'false Dalai Lama', following practices contrary to the traditions of my predecessors," he said.

Asked about the balance between those who support the "Middle Way Approach" (MWA) and advocates of complete Tibetan independence, His Holiness said that most young educated Tibetans who take a realistic view support the MWA, while others remain idealistic.

His Holiness asserted that in the 7th, 8th and 9th centuries there were three distinct empires:Chinese, Mongolian and Tibetan. Later, Chinese hardliners claimed that Tibet became part of China as a result of marriage in those early times. Then they claimed that Tibet had absurdly become part of China when they both fell under Mongolian control in 13th century. In due course, Jiang Zemin said that they should simply claim Tibet had been part of China since early times.

"It may be in our interest to remain within China if they ensure Tibet's material benefit, but provided they give us the freedom to preserve Tibetan culture, which is useful and helpful as a culture of peace and compassion."

He reported a conversation he'd had with an independence advocate in which they had agreed that China wasn't going to simply grant independence, Tibetans would have to fight for it. The question then was where they could obtain weapons and even if they could find a source, how they would pay for them. And if they could obtain them, how would weapons be delivered to Tibet? Not through India or Nepal, nor, probably, through Bhutan.

Questioned about whether it's possible to have any positive effect on other people's disputes, His Holiness repeated that rather than focusing on the differences between them, we should emphasise what they have in common as human beings.

His Holiness stressed the importance of being realistic and relying on common sense, reiterating the USA's and others' responsibility for leading the rest of the world towards democracy.