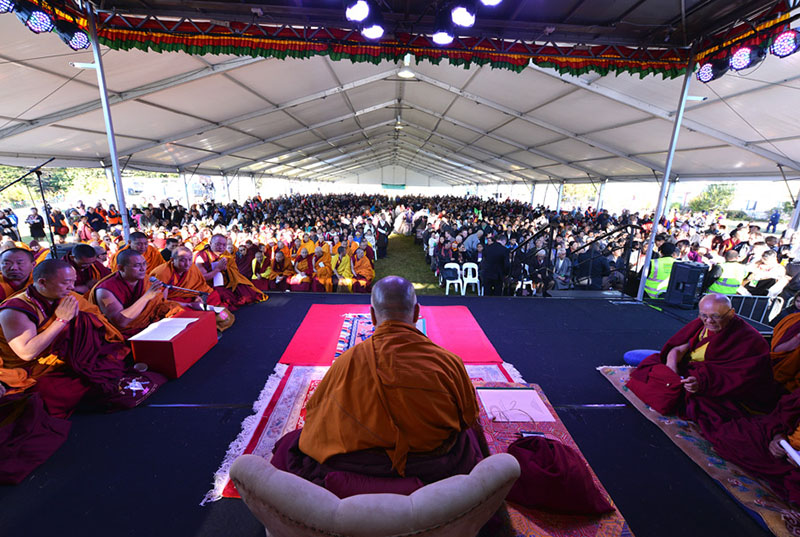 Leura, Blue Mountains, NSW, 7 June 2015 -- "People in Tibet remain strong and the Chinese authorities cannot pretend there is no problem. The people in Tibet are not happy," His Holiness the Dalai Lama told a crowd of audience. saying "we have to discuss how to take the Tibetan cause forward."

Over 1400 devotees, had gathered in Katoomba town, Blue Mountains, west region of Sydney to offer prayers for His Holiness the Dalai Lama's long life. The crowd, including more than 1000 Tibetans from Australia and New Zealand, 200 Vietnamese, nearly 60 Bhutanese, 10 Mongolians and others attended the event.

"Many of you have come here as refugees for a second time from India. And you've made this Long-Life Offering to me due to your dedication to the Tibetan cause. We're also joined here by brothers and sisters who follow the same teacher from Vietnam, Mongolia and our neighbour Bhutan. I'd like to thank you all," His Holiness told the gathering at the end of the traditional prayers.

"The Australian Tibetan Community has produced this concise, well-written report in which you have pledged to do your best to support the Tibetan cause and keep the Tibetan spirit alive. You've also pledged your support to the Central Tibetan Administration, which has created opportunities to educate children and keep our culture alive with the help of the Government of India," he said.

"We appealed to the UN, but, as Pandit Nehru advised me, the USA was not prepared to go to war with China over Tibet. We concluded that eventually we would have to deal with the Chinese government. Until now the Chinese policy has been to denigrate the Tibetan people and their culture, nevertheless we remain hopeful of being able to preserve our culture and values within the People's Republic of China. Among Chinese intellectuals, the Middle Way Approach has been well-received. We need to keep in touch with the Chinese people.

"You have also pledged not to have anything to do with Dolgyal. In the nearly 400 years since it arose, Dolgyal has always been controversial. I made the mistake of propitiating it and in doing so deviated from the tradition of past Dalai Lamas. It provokes widespread sectarianism and when I realised its shortcomings I stopped the practice. Then Ganden Jangtse Monastery experienced a series of misfortunes about which they consulted Trijang Rinpoche. He told them their main protector, Palden Lhamo, was displeased. They asked me what they could do about it. My investigations revealed the displeasure to derive from their propitiating Dolgyal and recommended they give that up.

"Once I had suggested restrictions on the practice of Dolgyal, those who promote it formed their own organization. Research reveals that the 5th Dalai Lama described Dolgyal as having arisen as a result of distorted prayers and as harming sentient beings and the Dharma. When I discovered this I stopped the practice, but I also felt I had a responsibility to inform others too.

"People started to demonstrate against me. They call me a Muslim and display photos of me wearing a Muslim cap. They say I'm a false Dalai Lama and flaunt ugly caricatures of me.

"As Buddhists we don't take spirits as objects of refuge. We take refuge in the Three Jewels. When Machen Pomra, the local deity of Tsongkhapa's birthplace, was summoned to Central Tibet, a shrine to him was not allowed within the monastic precincts of Ganden. Whether you propitiate Dolgyal or not is up to you, but doing so brings more harm than good."

His Holiness went on to say that the roughly 200,000 Tibetans in exile should work for the welfare of Tibetans in Tibet who are not free to speak out. He described their spirit and courage as amazing, noting that it is clearly alive even in the children and young people in Tibet. They remain strong and the Chinese authorities cannot pretend there is no problem. The people in Tibet are not happy. He stressed the importance of standing together.

He mentioned an American professor who, on the basis of Dunhuang documents, described three great Asian powers in the 7th – 9th centuries: the Chinese who were concerned with politics, the Mongols who were involved with war and the Tibetans who focussed on religion. After this, Tibet fragmented, which led to problems. This is why unity and solidarity is important now. He said:

"We cannot abandon the Tibetan cause, so we have to discuss how to take it forward."

In response to a request from former Tibetan representative Tenzin P Atisha, His Holiness gave a reading transmission of a Chenresig prayer and advised his listeners to combine it with reading the 'Three Principal Aspects of the Path' and 'Eight Verses for Training the Mind'. He emphasised the importance of study and advised that unless you transform the mind, you won't attain the state of Chenresig.

At the Carrington Hotel in another part of Katoomba His Holiness met about 100 Chinese intellectuals, writers and democracy activists. They greeted him warmly as he entered the room and he responded:

"I'm happy to meet you. Wherever I go I think of myself as just another human being. As human beings we are all the same, so it is meaningful to think of the oneness of humanity. It naturally reduces any sense of enmity amongst us. Look at what's happening in the Middle East where people are unfortunately killing each other in the name of religion. A lot of problems we face today are our own creation. We all want to live a happy life, and yet we make problems for ourselves. We see each other in terms of 'us' and 'them'. The use of force can't resolve the conflicts that result; we have to talk to each other.

"I'm also a Buddhist and have a commitment to promoting religious harmony. Despite their differing philosophical stances, the common message of all major religious traditions is love, forgiveness, tolerance and self-discipline. Therefore, we can respect them all.

"Thirdly I'm a Tibetan. Tibetan culture, influenced by Buddhism, is a culture of peace and non-violence, a culture of compassion. It's worth preserving. Similarly, Tibet's natural environment is worth protecting. A Chinese ecologist judged that the effect of the Tibetan plateau on the global climate is equivalent to that of the North and South poles, so he called it the Third Pole. Asia's major rivers rise in Tibet and 1 billion people depend on them, so preserving Tibet's environment is important too.

"For the last 30-40 years I have promoted friendship between Tibetans and Chinese. Athough we've had difficulties for the last 60 years, that shouldn't harm our 2000 year old relationship. I appreciate the efforts of those of you who have made this meeting possible."

His Holiness invited questions from the floor. Some participants took the opportunity to wish him a happy 80th birthday and presented him a scroll extolling wisdom and courage.

Asked about the oppression of Rohingya Muslims in Burma he answered that he had appealed to Burmese Buddhists, when they were moved by anger towards these people, to remember the face of the Buddha. He said he was confident that if he were present the Buddha would protect those under attack. He also confirmed that he has spoken to Aung San Suu Kyi about this.

To the suggestion that the Dalai Lama is crucial to the preservation of Tibetan Buddhism he replied that the Buddha passed away 2600 years ago and yet his followers have continued to maintain his teachings. Regarding the situation in China he said there are now more than 300 million Buddhists there. He recalled meeting Xi Jinping's father and noted that his mother is a Buddhist. At present Xi Jinping is preoccupied with rooting out corruption.

He repeated a wish he has occasionally expressed since 1954 to go on pilgrimage to Wutaishan. He reported a meeting he had with Chinese intellectuals in New York two years ago at which he was told that China has now reached the lowest point morally in its 5000 year history. Many say Buddhism is the only hope.

As to when things will change, His Holiness said the future is unclear. Signals are mixed. In recent times one official spoke as if a pilgrimage to Wutaishan was on the cards, only for hopes to be dashed shortly afterwards. He said the language of the recent White Paper on Tibet was tough.

Asked how moral problems might be tackled, His Holiness replied that here in the 21st century each land belongs to the people who live in it, not their rulers or leaders. He repeated what he has said elsewhere that the 1.3 billion Chinese people have a right to realistic, truthful information. On the basis of that they can judge right from wrong, therefore censorship should be eliminated. He remarked that everything in China is called the People's this and that, but asked, "Is that true?" He recalled that in 1954/55 Chinese socialists were truly dedicated to the welfare of the people.

Since then however, a huge gap has grown between rich and poor, with members of the Party becoming rich. He again stressed the importance of the rule of law and raising the Chinese judicial system to international standards.

"I met a Chinese student who told me how difficult it is for Chinese to express how they really feel. Don't lose heart. Be honest and do whatever you can."

Back at the teaching venue in the afternoon His Holiness said that it was the usual custom at the beginning of a tantric teaching to make an appropriate ritual cake offering. On this occasion he suggested reciting the '6 Session Guru-Yoga' together. During his preamble to explaining the Five Stages of Guhyasamaja, the translator, by a slip of the tongue, referred to a 'Mister Nagarjuna' instead of to 'the Master Nagarjuna', which made His Holiness roar with laughter.

"Actually, I often refer to these 17 Masters of Nalanda as Professors," he said, "so perhaps calling him Mr Nagarjuna is all right. Also I sometimes give images of the Buddha to friends, whether they are Buddhists or not. I tell them he was of course the Buddha, but he was also a great thinker and because he encouraged investigation, we could call him a scientist.

"In fact, even Nagarjuna was an alchemist. Once, when he was responsible for the welfare of the monks at Nalanda during a time of famine, he turned iron into gold. Subsequently, the disciplinarians decided this amounted to wrong livelihood and dismissed him from the monastery. Like the story of Virwapa, they were clearly very strict."