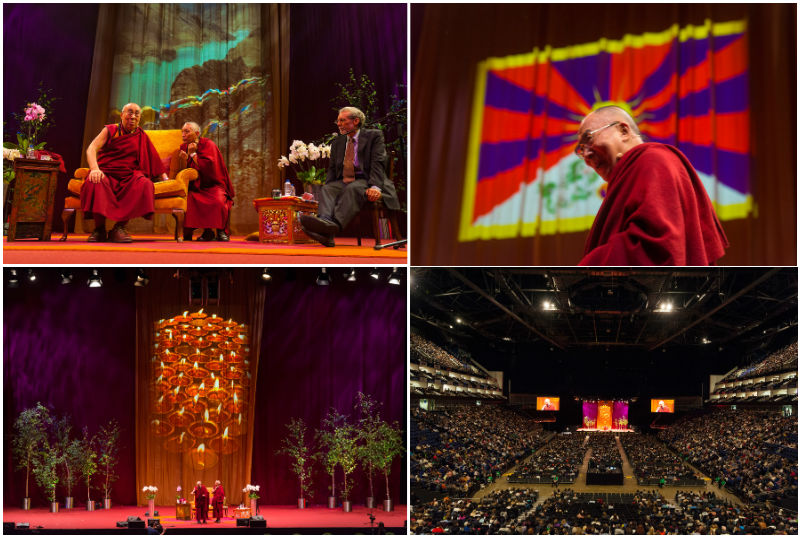 London, England — Responding to questions about dirty politics, His Holiness the Dalai Lama clarified that the quality of all human activities depends primarily on the motivation. It's not that politics is dirty, but if the motivation is selfish, it is likely to become so.

On September 19, His Holiness was greeted with fulsome cheers from an audience of 10,000 as he came onto the stage in the O2 Arena, the Greenwich peninsula in south-east London, England.

A young Tibetan woman led a recitation of a prayer for his long life before introducing Ngawang Lodup, a former monk from Amdo region of Tibet. Lodup performed a poignant mountain song followed by one of his own compositions, which praised His Holiness as the light of the 21st century and the soul of the people of the Land of Snow.

Next, a group of 52 Tibetan children aged between 6 and 14 sang a song that longed for the reunion of Tibetans in Tibet and an end to their sufferings.

"I'm very happy to be here with you and to have this opportunity to share some of my thoughts and experiences with you. And when it comes to the question and answer session, I hope I'll learn something from you," His Holiness said, adding: "I very much appreciate the organizers for providing us with this opportunity and I thank you for coming.

"I'm just one of the 7 billion human beings alive today. We are all physically, mentally and emotionally the same. We all face problems, but we also have the same potential to deal with them. Scientists have shown that even very small children respond positively to images of help and recoil from images of harm, demonstrating that basic human nature is compassionate and good.

"We can use our own common sense to see this too. Look at your neighbours. They may be well-off, but if they lack a sense of warm-heartedness, if they tend to be suspicious of each other, they won't be happy, whereas those who are trusting and warm-hearted clearly are happy."

His Holiness declared that at 80 years old he belongs to the 20th century generation. Those young people who are less than 30 years old belong to the generation of the 21st century.

He conceded that the generation of the 20th century had created many problems, including damage to the environment. Some of their ideas, such as the notion that problems can be solved by force are now completely out of date. He added:

Without waiting for the moderator to be introduced, at this point someone from the back of the hall cried out indistinctly,

"Is there discrimination in the Tibetan community? Is this true?" His Holiness responded directly.

"I suppose you are asking about the Shugden question, a controversy that has been going on for nearly 400 years. However, it's only come to prominence in the last 80 years or so. In my own case, while I propitiated this spirit, I had no religious freedom. I only gained that freedom once I understood its nature and background and stopped that practice.

Since then it's been my duty to make this clear to others. If you want to pay attention to what I have to say, that's up to you. However, you should go to South India and see for yourself that monks who want to do this practice have their own monasteries on land that was provided for Tibetan refugees. You can see for yourself that in fact they are free to practise as they wish."

At this, the audience broke into cheers and loud applause. Hansjorg Mayer of the Tibet House Trust then introduced Daniel Goleman, writer and scientist, who has long been a friend of His Holiness the Dalai Lama's, to moderate the questions and answers. He recently published a book 'A Force For Good: The Dalai Lama's Vision for Our World' to mark His Holiness's 80th birthday.

The first question he put to His Holiness was that he too had been listening to the BBC news as His Holiness regularly does and he wanted to know how he avoids feeling depressed.

"Firstly, many of the problems we face are our own creation, so logically we should also be able to solve them. Next, we have to remember how much the media tends to take positive developments for granted. It seems it's only killing, violence, stories of sexual abuse that make the news. I do think that the media should take a more balanced approach.

"Recently I heard on the BBC that it's been found that the content of mother's milk changes according to their children's need. This reminds me of an occasion I was attending an inter-faith meeting in Delhi.

"I represented the Buddhist tradition, another teacher represented Islam. Representing Hinduism was Dr Karan Singh, a great scholar of religion, and the son of the former Raja of Jammu and Kashmir. I teased him that when it came to mother's milk, as the son of a poor peasant farmer, I had probably done much better than he had as the son of a Raja, who was given a wet-nurse."

"One thing we have learned is that parents should spend as much time as they can with their children. Provide them maximum affection. This affection is our first lesson in life. In my case, my mother was so affectionate, we never saw her angry – unlike my father."

When Goleman asked more specifically about developing compassion, His Holiness told him that we all have a biologically based sense of compassion, but it tends to be biased, it is directed mostly to those we are already attached to.

However, it is possible to use our intelligence and extend our compassion to others, including even our enemies. He explained how it's necessary to distinguish the agent from their action. Someone may have harmed you and their action is wrong, but they remain human beings deserving of compassion.

His Holiness pointed out that attachment like anger is not an isolated emotion, but is related to many other emotions. Ancient Indian knowledge of the mind and how it works can help us understand this.

There was a question about dirty politics and His Holiness clarified that the quality of all human activities depends primarily on the motivation. It's not that politics is dirty, but if the motivation is selfish, short sighted and narrow minded it is likely to become so.

Asked whether things are getting better or worse, His Holiness referred to the great advances in mutual understanding that have taken place over the thirty years and more that he has been engaging in discussions with modern scientists.

"I've learned a great deal about matter and the physical world and modern scientists have taken a great interest in consciousness and the life of the mind. Out of these discussions has also emerged an understanding of a need for secular ethics. "

His Holiness also noted that compared to attitudes in the early 20th century, the idea that war is a solution to problems has been shown to be out of date. However, as the Copenhagen summit on climate change showed, when too many countries put national interests before the global interest, there is still a great need to cultivate a sense of the oneness of all humanity.

"Please think about what we've talked about today. If you think any of these points is useful, think about them some more, examine them and try to put them into effect. If you are able to think about these things for about 20 minutes every day, you'll find your life is happier. More important than celebrating a birthday is whether we can live each day in a meaningful way."