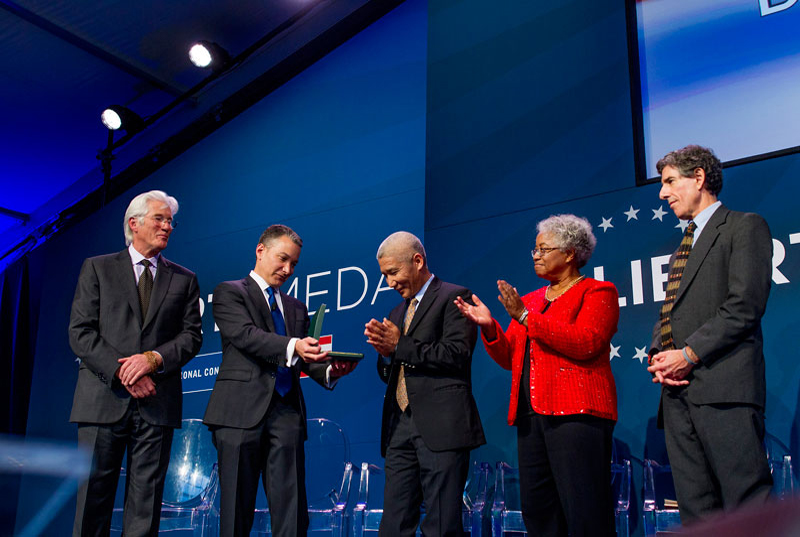 Philapelphia — The National Constitution Center awarded His Holiness the 14th Dalai Lama of Tibet the 2015 Liberty Medal on Monday, October 26, 2015, in recognition of his efforts to promote compassion and human rights around the world.

His Holiness was chosen in June to receive the award, which comes with a $100,000 cash prize, but canceled his appearance at the Philadelphia ceremony on Monday evening for health reasons.

Hollywood actor and longtime friend of Tibet, Mr Richard Gere also participated in the award presentation. At the National Constitution Center ceremony, Richard Gere called His Holiness the Dalai Lama "one of the great ones" who "wants nothing more than our happiness, which is ultimately us understanding the nature of things and how deeply interconnected we all are."

His Holiness the Dalai Lama said in a video statement that he regretted not being able to attend and considered himself a "simple Buddhist monk, no more, no less."

“Respected dear brothers and sisters, I feel great regret as I could not come there to receive your precious award because of my health reasons. However I want to thank your organization for this recognition,” His Holiness said.

“When I received the Noble peace prize, I emphasized that I am just a simple Buddhist monk, no more, no less. But that award or that name, I consider as some kind of recognition for my contribution towards peace, non-violence and reconciliation. So similarly, I am deeply touched to receive this medal,” His Holiness added.

“Your award is a recognition of my effort, my little service to humanity. I am fully committed till death to the promotion of human values including freedom and liberty. I believe these are basic human values," the spiritual leader said.

"Without liberty and freedom, human creativity cannot be utilized fully. Without individual creativity, it is difficult to progress," His Holiness said, adding "at the same time, liberty does not mean we have the freedom or liberty to utilize our destructive emotions.”

Drawing on the difference that one person can make to effect change, His Holiness said, “Sometimes, you see, the problem is huge and an individual may feel, “oh, I cannot do much.” But you have to realize that a worldwide movement starts from an individual."

"It doesn’t come from the sky, not from the UN, not from any government. But us individuals. First, an individual should take some initiative, then share it with your family members, then your neighbours, that way we change our way of thinking in the community," the Buddhist leader stressed.

"Eventually, the thinking of 7 billion human beings can be changed. So that’s my belief, my conviction. Thank you very much,” the Nobel Peace Prize laureate added.

Center CEO Jeffrey Rosen said in announcing the award that the Tibetan spiritual leader has "emphasized the ideals of freedom, dialogue and tolerance"—  "for this reason he embodies the spirit of the Liberty Medal, which aims to honour men and women who strive to secure such blessings of liberty to people around the globe."

The Liberty Medal was established in 1988 to commemorate the bicentennial of the U.S. Constitution. It is an annual award that honors men and women of courage and conviction who strive to secure the blessings of liberty to people around the globe.

The Medal is given annually by the Constitution Center to those who strive to secure liberty for people worldwide.  Previous winners include former Secretary of State Hillary Rodham Clinton, boxer Muhammad Ali, Nobel laureate Malala Yousafzai, rock singer and humanitarian Bono.

The National Constitution Center is a nonprofit, nonpartisan institution devoted to the United States Constitution and it serves as an interactive museum; a hub of civic education; and a national town hall for constitutional dialogue, regularly hosting government leaders, journalists, scholars, and celebrities for public discussions including presidential debates.