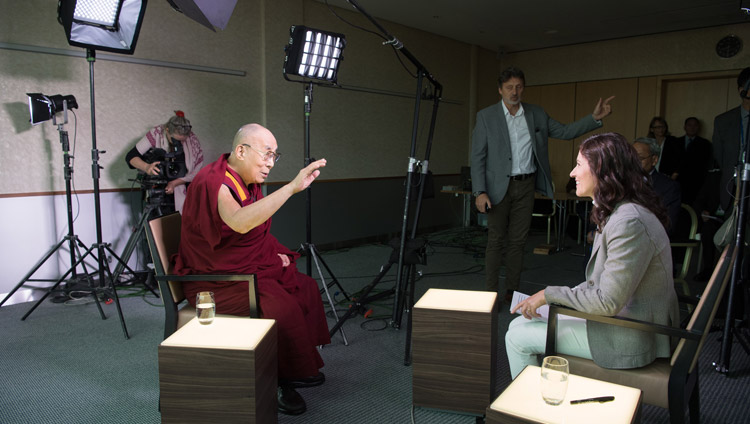 Rikon Swiss — His Holiness the Dalai Lama was interviewed by the Islamic scholar and journalist Amira Hafner-Al Jabaji for the Swiss television on September 22, when he said that “The world is passing through an emotional crisis, which only training the mind can solve. To complement the physical hygiene we observe to remain physically fit, we need emotional hygiene to strengthen the mind.”

Khenpo Thupten Legmon, the Rikon Abbot, thanked the Swiss authorities for their consistent support and generosity. President of The Tibet Institute Rikon (TIR), Dr Karma Dolma Lobsang expressed her gratitude to His holiness for attending the occasion of their 50th Anniversary Celebration in Winterthur and claimed that TIR functions like a bridge between communities.

Addressing the gathering, His Holiness expressed his gratitude to the authorities of Swiss as well as Swiss Red Cross for their unrelenting support to Tibetans. “I respect all spiritual traditions. I don’t try to proselytise or propagate Buddhism in non-Buddhist countries, because I think it is generally better for people to stick with the religions they are born to. However, I also recognise that there are aspects of our tradition that deal with logic and psychology that may be of more general interest” said His Holiness while commending the efforts made by Rikon monastery.

His Holiness stated that peace of mind arrives from efforts that are made to achieve a focused and calm mind while analysing the reality. “During dialogues with scholars and scientists over the last forty years or so, I have distinguished and set aside what is only of interest to Buddhists. I haven’t talked to them about enlightenment, nirvana, or future lives, but we have discussed how to achieve peace of mind in ordinary life” remarked His Holiness.

His Holiness extolled the Tibetan spirit and their passion to preserve their religion and the culture, which he claimed, is the foundation of the Tibetan’s firm spirit. Dr Karma Dolma offered a vote of thanks and the TIR foundation offered His Holiness a Swiss watch as a token of love and gratitude. The next day, he is to teach from Nagarjuna’s ‘Precious Garland’, Kamalashila’s ‘Middle Volume of the Stages of Meditation’ and Thogme Sangpo’s ‘Thirty-seven Practices of Bodhisattvas’.