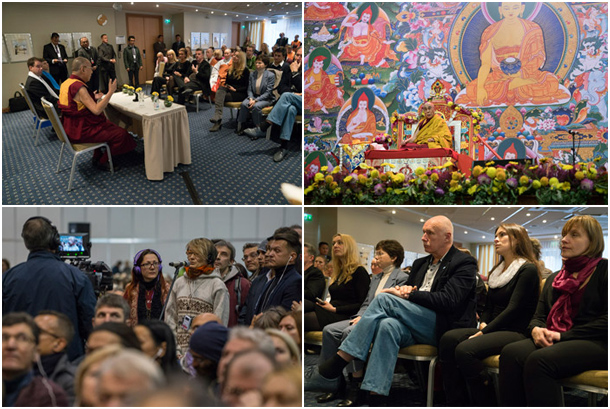 Riga, Latvia — Calling Tibet is the Roof of the World, His Holiness the Dalai Lama Tuesday said that Tibetan language too is under pressure and its study is restricted. He also said that since the year of 1974, Tibetans have been trying to find a win-win solution for both them and China.

The Tibetan spiritual leader was greeted by around 75 Tibet supporters from the Baltic regions of Europe in Riga, Latvia, on October 11, 2016. The Latvian Buddhists came before all others and gave a favorable reception to His Holiness by offering him a thangka painting of 1000 armed Avalokiteshvara. "Avalokiteshvara has a special connection with the Tibetan people. On one level I consider him to be my boss. Now and then I seek his advice," he said while receiving the gift from the devotees.

The Estonians asked him to come to Estonia and give lessons on Buddhism. He received a gift from the Lithuanian Representative as well. The Tibetan leader stated that, "It's a great honour to meet with friends for the three Baltic States again," His Holiness told them, "you have a lot of experience of oppression as we do.

"Tibet is often called the Roof of the World and the environment and climate of the Tibetan Plateau have an influence on our neighbors. More than one billion people depend on rivers that rise in Tibet. Deforestation and now mining have caused damage. The altitude and the dry atmosphere mean that this will take longer to recover than in other places.

"The Tibetan language too is under pressure. In some schools its study is restricted. In others it's not, but students of Tibetan earn lower marks than students of Chinese.

"Recently, the Chinese authorities decided to upgrade several towns to cities with the effect that even more Chinese come in. They tend to be uneducated and unskilled but they outnumber Tibetans and compete successfully against them for what employment there is. In towns the principal language is now Chinese and in Lhasa Tibetans have even switched to eating rice instead of the tsampa they used to eat," he stressed.

The Nobel Peace laureate further said that when he met with Buddhists from different countries, he came to an understanding about the significance of the Buddhist knowledge that the Tibetans have safeguarded through exhaustive study. According to him, if this awareness about Buddhism declined then it would be a considerable loss. He repeated that Tibetans are not on the lookout for independence. Nevertheless, they need to have the chance to conserve their learning, culture and language. He went on to say that since the year of 1974, Tibetans have been trying to find a win-win solution for both them and China.

The Buddhist leader started the session by repeating some words of Nagarjuna – considered as the second Buddha of this age and who at the beginning of his 'Fundamental Wisdom' pays his deepest respect to the Buddha for enlightening mankind on the fact that whatever emerges is devoid of the eight extremes like ceaseless and fatal, neither coming nor going, lacking both sameness and difference, and without any conceptual construction.

He questioned the audience about why human beings discuss about the intrinsic existence and answered by saying that it is due to mankind's misunderstanding about the nature of existence which is one of the main reasons for suffering.

His Holiness explained in details about the five elements of a body and further remarked that if one looks for the self between these five elements, one does not discover it. He claimed that, ""The Dalai Lama is not my body; he is not my mind, but nor is he separate from them. When we analyze in this way, we find nothing. We conclude that we exist by way of designation."

He also talked about how a poor but loving family can be happy and this indicated that caring for others other than yourself gives birth to happiness. He discussed about Bodhichitta as well and offered the lay-person's vows to people interested in it. Lastly, he passed on the mantras of the Buddha, Avalokiteshvara, Manjushri and Arya Tara.

After the lunch break, His Holiness welcomed questions from the gathering. When asked about bringing up children, he said that it is okay to be strict when a child disobeys you or if his/her behavior is harmful. Then, he voiced his opinion on this further by saying that being forbidding towards a child is not the correct approach.

He also answered another questioner's query about the alliance between spiritual life and family life. He replied that Buddha never said that people who follow him should become a monk or a nun. The main essence of Buddhism is converting the mind for the better and it very much complements family life.

When he was asked by another man about taking up arms and keeping aside one's Buddhist beliefs, the former responded by stating that in today's world each person is dependent on the other and there is no point in killing one another. He also referred to the past century's violence all over and asked the point of it all.

When one questioner wanted to know about the verse, "As long as any sentient being Anywhere has not been liberated, May I remain [in the world] for the sake of that being
Though I have attained highest enlightenment.", His Holiness said that it was about teaching the mind to be of service to others for a long and indefinite period of time.

His Holiness restarted the second chapter of Dharmakirti's Commentary on Dignaga's Compendium of Valid Cognition." He focused on specific verses to talk about how Buddha is a dependable mentor. He also discussed the part of the Four Noble Truths in Buddha's lessons and the realization that ignorance is nothing but distorted and a misunderstanding of reality.

As he came on to the end of the chapter, he once again told his audience that a Russian Indologist had made a favorable impression on him due to his hard work for attempting to bring attention to Dharmakirti's contribution to Buddhist logic.

He finished his teaching by saying,"It's been a great pleasure to have the opportunity to give this introduction, to conduct the ceremony for cultivating the aspiring awakening mind and to have had the opportunity to explain something. I hope I may have sparked some interest in you. I regard the works of the Nalanda masters as truly eye-opening.

"The Arhat Sagalha said we must make this life meaningful through study, reading books and cultivating the Three Training. I'm 81 years old, but whenever I can I read books. Sakya Pandita said, "Even if you are going to die tomorrow, it's worth studying today." If as a result you can deal with the problems you face and tackle your negative emotions, the purpose of the teaching has been served."

The event came to an end with noted Russian singer Boris Grebenshchikov's performance. While His Holiness was departing from the stage he received various calls of affection from the audience. He waved his hands and, "See you again." He is scheduled to travel to Bern in Switzerland the next day.