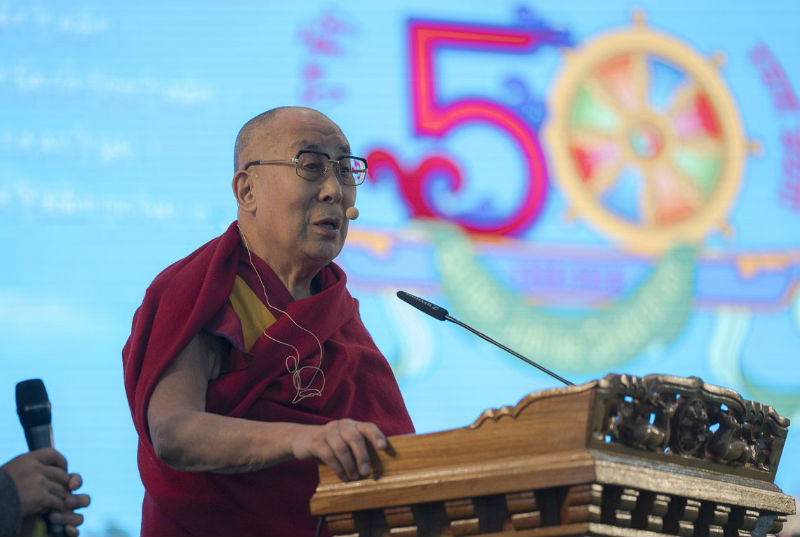 His Holiness the Dalai Lama during the Golden Jubilee celebration of Central Institute of Higher Tibetan Studies in Sarnath, Varanasi, India on January 1, 2018. Photo: OHHDL

Both Gaya, India — The spiritual leader of Tibet, His Holiness the Dalai Lama extended New Year greetings for 2018 while on a tour to the northern Indian state of Uttar Pradesh to take part in the Golden Jubilee celebration of Central Institute of Higher Tibetan Studies in Sarnath, Varanasi, India on January 1, 2018.

"All of us are travellers through the journey of time, including myself. We travel through time, months, weeks, day and so on," the Tibetan spiritual leader told the told a crowd gathered at the University."Today is 2018. The important thing is when you look back at beginning of 2019 to 2018, how would you think about the year that you have spent? Would you have a sense of contentment saying that I have lived that year well, I have served the purpose of that year or would you be looking back with a sense of regret for all the troubles that you have caused."

"So this is why it is important that when we begin the new year and look forward, we should project our intentions ahead so that we make this year a meaningful one. So that when we turn back to look at it, we can live our life with sense of happiness and joy," said the Tibetan Nobel Peace Prize laureate.

"Infact if an individual were to make conscious intention to live his or her life with sense of purpose, live it in a good way, the ripple effect of that really spreads. First from individual to family, then to community, to friends and neighbors and so on," His Holiness said.

"This is how society gets changed and affected. Otherwise, when we talk about transformation of society, the transformation really has to start from individual, from inside to outward. Otherwise we would be expecting some kind of transformation coming from outside, from above. That is unrealistic."

Sarnath, where Buddha had delivered his first sermons, warmly greeted the Tibetan spiritual leader, who arrived here on a five-day visit on Friday to take part in the golden jubilee celebration of the Central Institute of Tibetan Higher Studies. During his stay His Holiness attended a two-day international conference on 'concept of mind in science and philosophy' on December 30-31.

His Holiness arrived at the Maha Bodhi temple in Bodh Gaya, where Gautama Buddha attained enlightenment about 2500 years ago after concluding his tour of Sarnath in Varanasi, where Buddha had delivered his first sermon after enlightenment.

Thousands of followers from different parts of the world including USA and several European countries have already arrived in Bodh Gaya to benefit from the spiritual leader's sermons. He would be delivering sermons called teaching by his followers at the historical Kalchakra Maidan, about 200 meters to the north-west of seat of Buddha's enlightenment. The Buddhist spiritual leader will be staying here for a month and this is going to be his longest sojourn in Bodh Gaya.