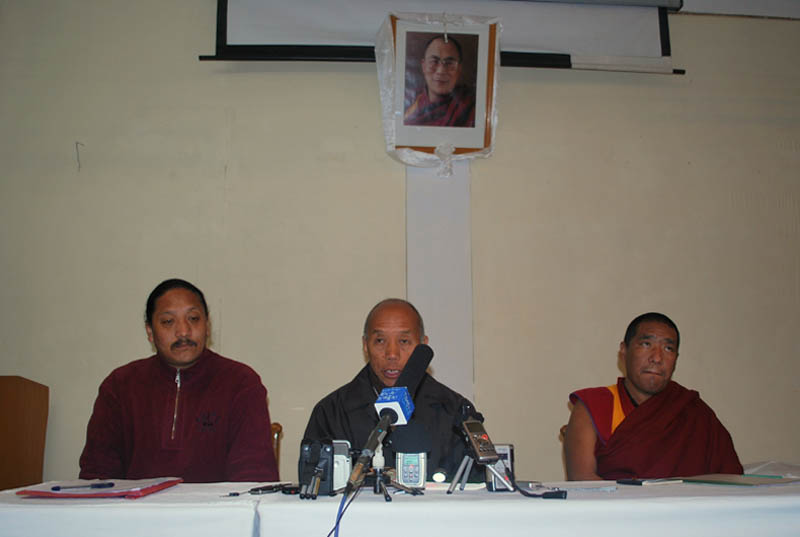 Dharamshala: Two months before the final round of the Kalon Tripa (Prime Minister of the Tibetan Government-in-Exile) election, three names are still in the running for next Tibet's PM. Wednesday, the Central Election Comission presented Mr Lobsang Sangay, Mr Tenzin Namgyal Tethong and Mr Tashi Wangdi as the remaining candidates for the elections.

The preliminary polls, held on October 3, offered Mr Lobsang Sangay a comfortable first position with 22,489 votes out of the total 47,000 votes cast. Mr Tethong, Prime Minister of the Tibetan Government-in-Exile from 1993 to 1996, registered 12 319 votes, while Mr Wangdi, who served the Government-in-Exile as a cabinet minister, collected 2101 votes.

"Initially, there were six candidates, but today, only three remain. We could have allowed them to contest for the final elections but some of them withdrew, some of them resigned", explained the Chief Election Comissioner, Mr Jamphel Choesang. For instance, Mrs Dolma Gyari, who was on the third position with 2733 votes, gave up after the preliminary round, justifying her decision by "the huge gap in the number of votes" she received, adding that she feels "very strongly that the public has given [to the first and the second candidate] the mandate for the run".

Alongside the Kalon Tripa election, the Tibetan community in exile will vote for the Parliamentary elections. 94 candidates are running for 44 seats.

"The role of Tibetan Parliament is more important than the one of the Kalon Tripa", explained Mr Choesang. "If the Kalon Tripa doesn't perform his duty according tho rules of regulation (written in the election statutory book), the Parliament can impeach him and ask him to resign before the completion of his five years of duty.

On the other side, the Kalon Tripa doesn't have the power to desolve the Parliament. Moreover, the Kalon Tripa is the head of our executive but he has to seek people's mandate, according to the democratic system. He cannot do anything individualy, unless he consultes the Tibetan Parliament, or, at a larger extend, the Tibetan people at large. That's why the Kalon Tripa's political role is more limited than our Parliament's one", he added.

During the press conference held on Wednesday, Mr Choesang also raised the question of the participation, as abstention spectacularly went down from 73,2% at the last elections in 2006, to approximately 39% this year at the preliminary polls. The Election Comission announced it is still expecting more voters for the last polls on March 20, as it presented fresh registration dates from November 30, 2010, to January 17, 2011, for eligible voters who didn't go to the polls on the preliminary round in October.