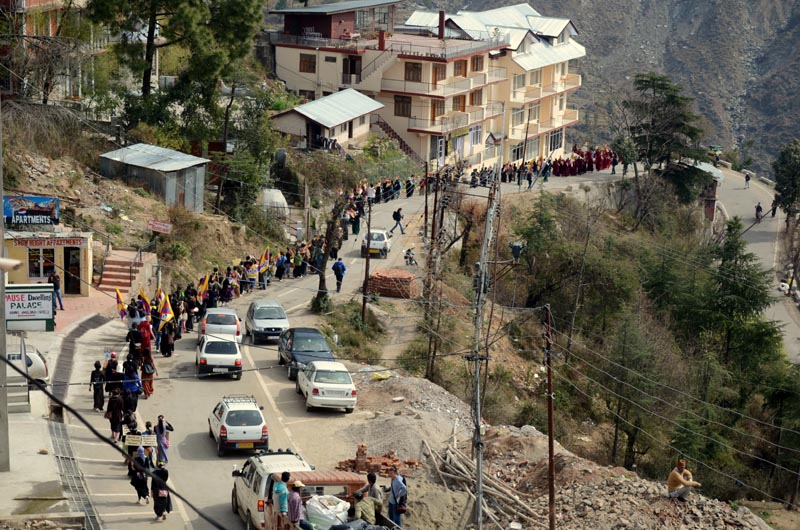 Dharamshala: Sataurday, March 12, many Tibetan women of the Dharamshala Exile community gathered at the main temple to commemorate the 52nd anniversary of the 1959 Women's Uprising in Lhasa, the capital of Tibet.

During the ceremony a minute's silence was observed to honour those women who were beaten, tortured and degraded by the Chinese government as they peacefully voiced their opposition to Chinese oppression in Tibet's capital, and in particular those who gave their lives to the cause.

The event was held by the Tibetan Women's Association (TWA) and featured speeches from prominent women in the community, and also served as the release for Jamyang Kyi's book 'A Sequence of Tortures: A Diary of Interrogations' on the demonstrations that swept the three provinces of Tibet in 2008.

It was the second time this week that the Tibetan community has commemorated the 1959 uprisings, following Thursday's National Tibetan Uprising Day ceremony and rally which saw a turn out of several thousand Tibetans march from the main temple down to Lower Dharamshala, after an important speech made by His Holiness the Dalai Lama.

Tibetans and supporters have rallied in cities all over the world this week to commemorate the March 10 and 12 anniversaries and show their unwavering conviction and demands for greater freedom in Tibet.

In New Delhi- On the occasion of the 52nd anniversary of the National Tibetan Women’s Uprising Day, the group dedicated this day to honor the indomitable literary spirit of the Tibetan Women inside Tibet. TWA organized an exclusive literary event, “Honoring the Literary Spirit of Tibetan Women Inside Tibet”. The event held at the Deputy Speaker Hall of  Constitution Club of India, featured a book launch and a panel discussion.

"Post 2008 national protests inside Tibet, the world is witnessing a cultural and intellectual renaissance in Tibet where intellectuals, thinkers and artists are reasserting their Tibetan identity and patriotism in a creative way. Tibetan Women like Tsering Woeser and Jamyang Kyi have written fiercely under oppression and their works have contributed largely to amplifying the suppressed voices in Tibet," said a report released by the women group.