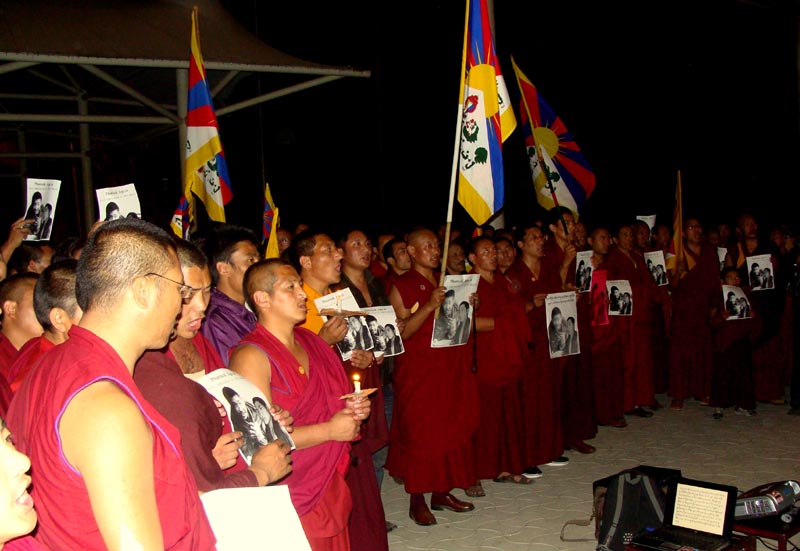 Dharamshala: A candlelight vigil was held last night (17 March) in the Tibetan Exile Community in Dharamshala, northern India, in memory of the young Buddhist monk who immolated himself Wednesday in Amdo province in Tibet in protest to Chinese oppression.

The vigil began at the Main Square with a procession of monks, nuns and lay-people bearing candles and chanting prayers together with foreign supporters of Tibet also in attendance. The procession ended at the Main Temple where an impassioned address was made to those gathered sombrely in mourning.

The memorial statue outside the temple was adorned with flowers, candles and pictures of the smiling 20-year-old and the ceremony ended with the reading of a press release (below) encouraging people to take action, before finally a prayer was sung for the young martyr, tragically lost, as people spilled out into the streets.

Press Release: Tibetan NGOs stand in solidarity with yesterday's monk self-immolation in Tibet
Dharamsala, March 17 - The five major Tibetan NGO's in Dharamsala unite today to express solidarity in response to the brutal suppression by the Chinese government of the Tibetan protestors in Amdo Ngaba yesterday. The incredible expression of unrelenting courage and determination by our brave Tibetan brothers and sisters in Amdo Ngaba exemplifies that no amount of force can kill the spirit of the Tibetan people.

According to reliable sources, a 20 year-old Tibetan monk of Kirti Monastery in Amdo Ngaba County initiated a solo protest in Meru market place before setting himself ablaze. Sources report that around 4pm Beijing time, Phuntsok carried out a protest to commemorate the 3rd Anniversary of the protest on 16 March 2008 in Ngaba County and the subsequent ruthless crackdown by the Chinese government who shot dead at least ten Tibetans. 2008 was a watershed year in the history of Tibetan struggle for Independence. For the first time, massive protests engulfed Tibet in all three provinces resulting in hundreds of Tibetan deaths due to shootings, executions, torture, scores of disappearances and hundreds of arrests and detentions by the Chinese government.

Sources comment that Chinese security officials immediately arrived at the scene, doused the fire, and beat Phuntsok. The officials tried to whisk him away in a waiting police van when scores of Tibetans ran to the spot and saved Phuntsok from the police. The crowd immediately grew in numbers and carried Phuntsok off to his monastery. Unfortunately Phuntsok succumbed to his injuries and died.

In the meantime hundreds of angry monks and lay Tibetans gathered at the main Meru market in mass protest chanting slogans calling for Tibet's independence and long life of His Holiness the Dalai Lama. Immediately security reinforcements were brought in from neighbouring areas to crush the protestors. Hundreds of Tibetans have been arrested while scores suffered serious injuries from overwhelming Chinese People's Armed Police (PAP) forces who used iron rods and electric batons.

The five major Tibetan NGOs condemn the continued inhumane treatment of the Tibetan people and remind the government of China that the seismic waves of Tunisia and the Middle Eastern countries have reached Tibet. The government of China cannot ignore the surge of Tibetan people's conviction and power. This is the second self-immolation by a Kirti Monastery monk. On 27 February 2009, Tapey, a monk in his mid-twenties, set himself ablaze to protest decisions by local authorities prohibiting Kirti monks from observing the Monlam Festival, a traditional prayer festival that is held after Tibetan New Year (Losar). Reports at the time indicated that Chinese police opened fire on Tapey while he was still in flames. Tapey survived miraculously, but was taken into custody along with his mother somewhere in Chengdu. No one has seen or heard about them since then.

As we Tibetans in exile prepare and brace ourselves for the coming days of expected violent suppression by the Chinese government, we propose to fellow Tibetans and Tibet supporters around the world to take up the following plan-of-action.

When you call, please make sure you introduce yourself and express the urgent need to immediately respond to the critical situation in Ngaba and ask them to contact the Chinese authorities for clarification on the incident and emerging reports that the area has been put under heavy military surveillance. Please make it a point to mention that you will follow up on this call and do follow up. It is important to mention that the intervention of the International Community in this matter is highly relevant and important in order to ensure that truth, justce and non-violence still have a place in this world.

1. Call the Chinese Embassy in New Delhi. Ambassador: H.E. Mr. Zhang Yan Tel: 91-11-2611 2345. Political Section: Tel: 91-11-2467 9299. Press Office: Tel: 91-11-2688 1249. Email: This email address is being protected from spambots. You need JavaScript enabled to view it. Contact information for Beijing Embassies can be found at http://www.chinahighlights.com/embassy/embassy-in-china/beijing/
2. Tell your friends and families about this incident and how they can help through facebook, twitter and other social networks and microblogging.