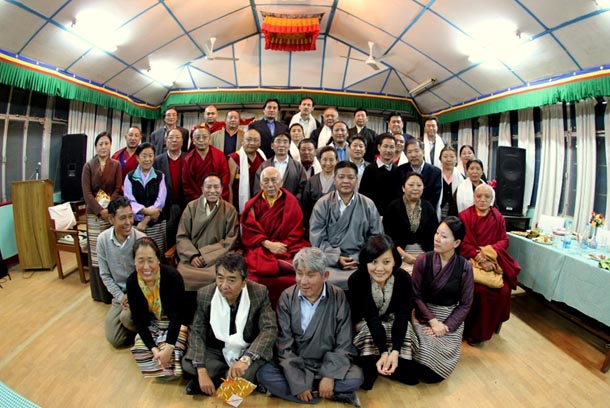 Dharamshala: The Tibetan Parliamentary Secretariat Wednesday (30 March) announced the proceedings of the Second Tibetan National General Meeting to be held in Dharamshala from 21 - 23 May 2011.

The proceedings of the general meeting was finalised yesterday at a meeting of the members of the Kashag and the Parliament's Standing Committee presided over by the Parliament Speaker.

The general meeting will be held in accordance with the final resolution passed during the 11th session of the Parliament to follow up His Holiness the Dalai Lama's proposal to devolve his political authority to the democratically elected Tibetan leadership.

The composition of the members participating in the general meeting will be Kalon Tripa; members of the Kashag; former Kalons; elected Kalon Tripa of the 14th Kashag; members of the Parliament; former members of Parliament; elected members of the 15th Tibetan Parliament; Dharamsala-based CTA officials above Joint Secretary; one representative each from the local assemblies and one each from those Tibetan Settlements which do not have any local assemblies; one member each from Bod Rawang Denpai Legul Tsogchung; six representatives each from the four schools of Tibetan Buddhism and Bon religion; one member each from the overseas Tibetan Associations; two members each from the Tibetan non-governmental organizations (Executive Committees of U-Tsang, Do-tod and Do-med, Tibetan Youth Congress, Tibetan Women's Association, National Democratic Party of Tibet, Gu-Chu-Sum, Ngari Chithun Tsogpa, Cholsum Chigdril Tsogpa and Bod Gyalyong Chapsi Tsondrol Tsogpa); and one representative each from autonomous institutions (Tibetan Institute of Performing Arts, Library of Tibetan Works & Archives, Central University of Tibetan Studies, Varanasi, Norbulingka Institute, Manjushree Center of Tibetan Culture, Darjeeling, Tibet House, Delhi, Head Office of the Tibetan Children's Village, Tibetan Home's Foundation, Mussoorie, Sambhota Tibetan Schools Society, The Central Council of Tibetan Medicine, Men-Tsee Khang, Delek hospital, Sherig Parkhang, Federation of Tibetan Co-operatives in India Ltd), 50 voluntary participants comprising of scholars, experts and social activists (30 from India, Nepal and Bhutan and 20 from other countries).

The participants are required to send their names to the Parliamentary Secretariat before 30 April 2011.

On the first two days of the meeting, separate committees will be formed to deliberate on the recommendations of the Charter Amendment Drafting Committee and relevant proposals on the appeal to be made to His Holiness the Dalai Lama.

Each committee will present its report on the final day of the meeting. Subsequently, a final resolution will be passed based on the final outcome of the discussions on the recommendations of the Charter Amendment Drafting Committee and relevant proposals on the appeal to be made to His Holiness the Dalai Lama.

The Tibetan Parliament will apprise His Holiness the Dalai Lama about the final recommendations of the general meeting on 24 May 2011.

Accordingly, the recommendations concerning the amendment of the Charter will be tabled in an additional session of the 14th Tibetan Parliament for final approval.