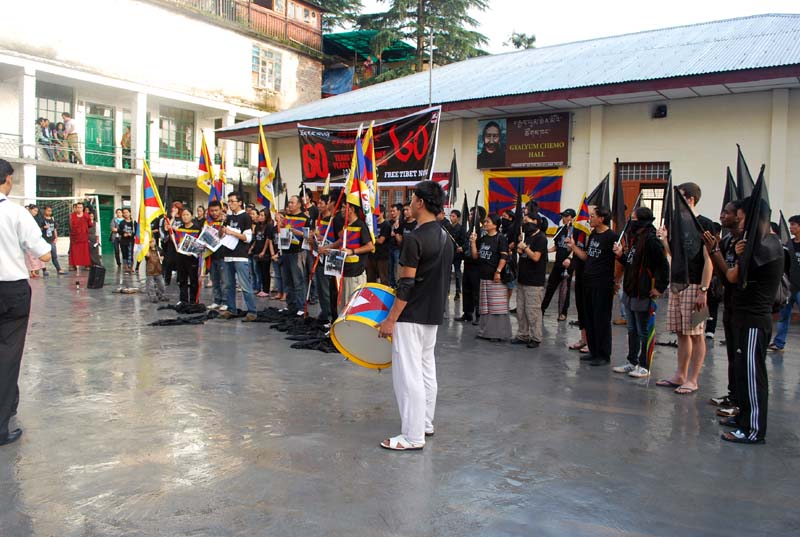 Dharamsala, July 13,2011: - Tibetans and supporters rallied from the main temple Tsuglakhang and gathered at TCV Day School in McLeod Ganj despite the intermittent rains to protest the Chinese government's planned propaganda celebration this week in Lhasa, Tibet. The celebration marks 60 years of Beijing's rule over Tibet. The commemoration comes as tensions remain high in eastern Tibet where daily protests continue to take place since mid-March and Chinese security forces are engaged in an intense security clampdown.

Students for a Free Tibet (SFT), India led the action with 60 people carrying black flags representing China's 60 year of oppression & occupation of Tibet. A group of 6 people wrapped in black cloth were followed by files of people holding black flags and later young Tibetan children, dressed in Tibetan traditional clothings, unwrapped to reveal the Tibetan flags underneath at the TCV Day School, as a symbol of new generation unveiling the 'Truth' and ultimately 'freeing Tibet.' There were also distribution of black arm bands throughout the day to signify Tibetan people's oppression & resistance.

A flash-mob action was also staged at the India Gate by SFT 's Delhi-based Chapter.

"China's propaganda celebration of the so-called '60 years of peaceful liberation' is a futile attempt to legitimize their illegal occupation of Tibet. China's recent white paper on Tibet is but another of its many propaganda attempts," said Dorjee Tsetan, National Director of Students for a Free Tibet- India." Tibetans have repeatedly rejected Chinese rule and it has only been ever growing since the widespread protests across the plateau in 2008."

Yesterday, the Chinese government released a "White Paper" on Tibet's "progress" under Chinese rule. Tibet advocacy groups released a report last month documenting China's 60 years of failed policies in Tibet that have resulted in severe marginalization, discrimination and exploitation of the Tibetan people and their environment.

"With the new wave of protests growing in Ngaba & Kardze, we are seeing extraordinary resistance by Tibetans against China's oppression & occupation of Tibet," said Tenzin Jigdal, Campaigns Director of Students for a Free Tibet, India. "China must immediately stop the ongoing crackdown in Kardze & Ngaba and release all those detained and imprisoned at once."

Just days ago, Tibetans across Tibet defied China's policy banning celebrations of the Dalai Lama's 76th birthday. Photos from Tibet show huge plumes of smoke rising from homes and monasteries as Tibetans observed rituals such as incense burning for the long life of the Dalai Lama.

Students for a Free Tibet networks across the world, including USA, Canada, France & Japan, took part in this global day of action.