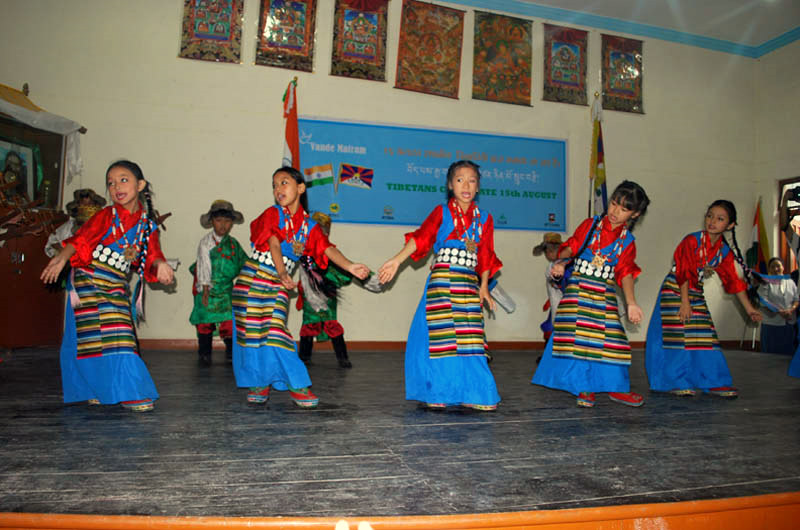 Dharamshala: - At 10 o'clock this morning at the McLeod Ganj Tibetan dayschool, five Tibetan NGOs jointly held a celebration in honor of the Indian Independence Day, 15 August (known as "pandra August" in Hindi). The event was attended by Mr. Ajay Singh Mankotia, the president of the Indo-Tibetan Friendship Society, and Mr. Prim Saker, the Secretary of the Friendship Society, as well as Tibetans, local Indians, and foreigners, who numbered in total around 500 people.

The first order of business was the singing of the Indian national anthem by all attendants, followed by the main guest's speech. Mr. Mankotia said that Tibetans have a very special leader in His Holiness the Dalai Lama, who is a notable figure not only for Tibetans but for the entirety of the globe, and that he is respected worldwide.

"This time," Mr Mankotia said, "I would like to say that many Tibetans and Indians are living together here and many have grown up here, so they harbor a personal love for the beauty of Dharamsala. This love is vitally important to the protection of the environment and the maintainenace of the beauty and cleanliness of the region of Himachal Pradesh." Indian Prime Minister Manmohan Singh spoke as well on the state of the environment in his annual Red Fort speech, declaring that "preserving our environment even as we develop rapidly is a huge challenge for us. Climate change poses a threat to both our development processes and our natural resources."

Mr. Mankotia also spoke about the relationship of Tibetans and Indians living together in Dharamsala. "For Tibetans, it is important to follow the rule of local Indian institutions and the Indian government. If Tibetans follow the rule of the Indian government, they will not have problems; living together peacefully will benefit the happiness of all." Mr. Mankotia said that he believed in the hope of the nation of Tibet one day acheiving its freedom, and that after Tibetan freedom, such a celebration as today could convene in Lhasa.

Following in the footsteps of His Holiness the 14th Dalai Lama, who crossed the border in 1959, more than 150,000 Tibetan refugees have fled to India during the past 50 years. The government of India has built special schools for Tibetans that provide free education, health care, and scholarships for those students who excel in school. Tibetan refugeess are allowed to live in India with a stay permit, which must be renewed every year, or every six months in some regions.

Tenzin Tsundue, a Tibetan independence activist from the Regional Tibetan Youth Congress, Dharamshala, also spoke at the event, saying that during the twentieth century the British government occupied many foreign nations with greater power and longer duration than China does today. At that time, many Indians felt that it would require a long and difficult struggle to gain their independence. Yet after 200 years of occupation, their freedom was eventually acheived. "Today the economic situation of India is stronger than that of Britain. Now Tibetans live under Chinese occupation, but one day we also may have our freedom. Many Asian countries gained their freedom from colonialism when it once seemed impossible."

Today marks the 65th anniversary of Indian independence from British colonial rule, which took place on the 15th of August in 1947. The NGOs which organized today's events in Dharamsala were the Regional Tibetan Youth Congress, the Regional Tibetan Women's Association, the Gu-Chu-Sum Movement of Tibet, the Tibetan Center for Conflict Resolution, and Students For Free Tibet-India. Thang Dhong Luger, the Yong Ling School, and the Jaipur Women's Indian Association performed at the festivities with singing and dancing.