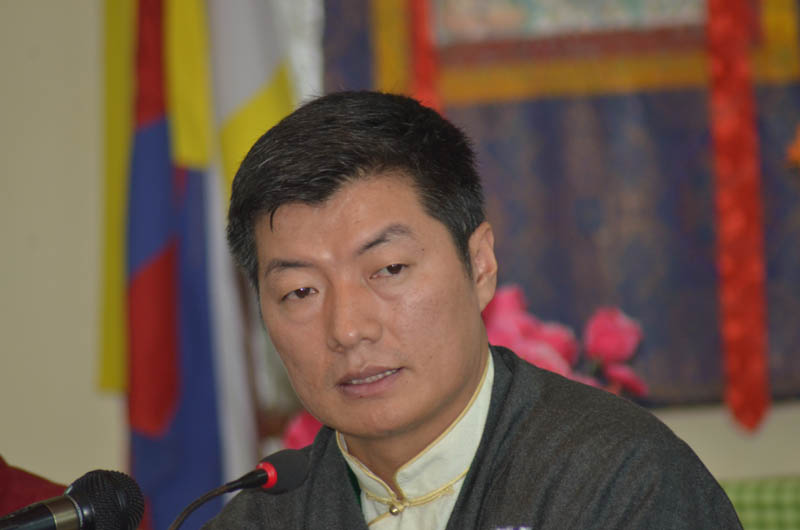 Dharamshala: - Newly elected political leader of Tibetans, Kalon Tripa Dr Lobsang Sangay Friday (19th August) addressed the entire officials of the Central Tibetan Administration based in Dharamsala, outlining his policies and plans to strengthen the Tibetan struggle, and to make the exile community and administration more sustainable and robust.

Attributing the existence of a sustainable and vibrant administration and community in exile to the efforts made by the previous generation of Tibetans, Dr Sangay said commitment, sincerity and efforts on part of the present CTA officials would shape the future sustainability of the administration. He called on the staff members to forge a united effort to realise both the short- and long-term goals of the Tibetan people.

Describing the current situation as very critical and grim, Kalon Tripa said Tibetans inside Tibet are sacrificing their precious lives in protest against the wrong policies of the Chinese government. We must also reinvigorate our commitment and redouble our efforts to fulfill the aspirations of our compatriots living under repression, he added.

Kalon Tripa said the return of His Holiness the Dalai Lama to Tibet and restoration of freedom to Tibetans would remain his principle objective.

He briefly outlines his policies and plans to be carried out in the next five years, which include the formation of Tibet Policy Institute, Tibet Corps and trainings to professionalize the bureaucrats.

He reiterated that education would remain his leadership's top priority. Special efforts would be made to reach 10,000 professionals in exile and hope for 100,000 among Tibetans inside Tibet in the next two decades, he said.

He said special efforts would also be made to retain bureaucrats to work for longer duration in the administration. "We will gradually review and try to assign staff members to departments in accordance with their expertise and educational background," he said.

He also spoke about plans to convene meetings of CTA officials to brainstorm how to make our administration more efficient.

Brimming with great optimism, Kalon Tripa said he is a pragmatist by nature and the Tibetan struggle both in and outside Tibet would remain alive with support and unity of all six million Tibetans.