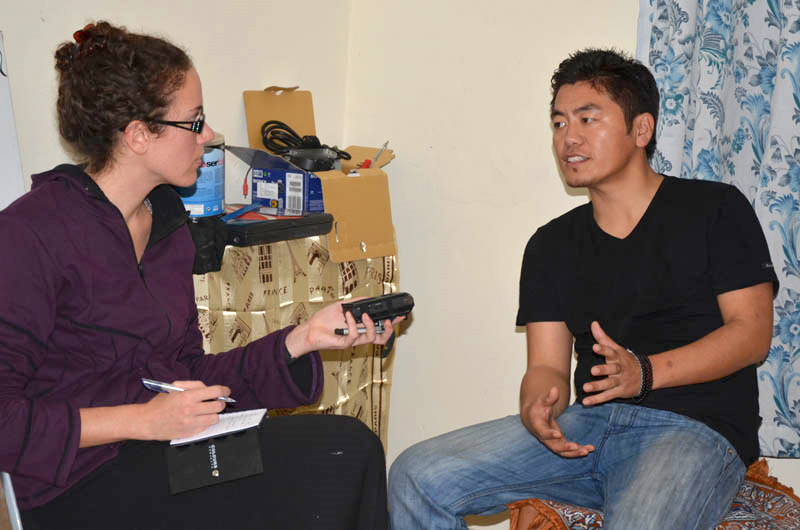 Dharamshala: Students for a Free Tibet (SFT) is an international organization of young people who support the Tibetan movement. "Through education, grassroots organizing, and non-violent direct action, we campaign for Tibetans' fundamental right to political freedom," their website asserts.

The Tibet Post International recently spoke with Dorjee Tseten, the Campaign Director of SFT India, about the vision and future plans of the organization.

SFT India started in 2002, and their main office is located in Dharamshala. The organization has chapters, or branches, in several major Indian cities such as Delhi, Bangalore and Mumbai.

The organization was founded in 1994 in the United States, and their international headquarters is located in New York City. Besides India and the US, SFT has national offices in the UK and Canada as well as branches in 30 countries worldwide.

As Dharamshala is a hub for the Tibetan community, the office here serves an important role for SFT. Branches from within India and worldwide as well as instrumental figures like His Holiness the Dalai Lama have visited, spoken at, and worked with the Dharamshala chapter.

Political campaigns are directed to the Chinese leaders. Last year, for example, when Chinese premier Wen Jiabao visited Delhi, SFT conducted a banner hanging campaign near the conference center. "It was a major news story internationally," Tseten said. "When China lies to the media, to the international community, we make sure that people know the truth about Tibet."

"These are serious cases. Life as precious. In Buddhism, we consider if a person kills, burns himself, this is a kind of sin, this is not respecting your life. And now we have reach a stage where people kill themselves because...there is no other way to pass the message about what is going on inside Tibet."

Tibetans also routinely get imprisoned for up to five years for simply expressing their opinions; there are currently 800 political prisoners in detention in Tibet.

SFT focuses on getting information out about such abuses; "the human rights campaigns really come out in the international media. Some international leaders even speak out, say it shouldn't be this way," Tseten said.

Economic and environmental campaigns strive to make China ashamed of their actions; for example, SFT raises awareness in India and internationally about issues such as China's mining and dam-building activities in Tibet.

Tseten is making preparations to travel through India on an SFT chapter visit. During the trip, he will visit several major Indian cities in an effort to strengthen existing chapters of SFT as well as to make connections with those interested in starting new chapters. He will be gone for a little over a month, and during that time he will visit colleges, schools, youth organizations, environmental organizations, and various other societies.

By focusing on Indian institutions during the chapter visit, he hopes that the visit will increase the already strong Indian support for the Tibetan cause. Through screening Tibetan documentaries, speaking with members of Indian student unions, and soliciting input from existing members and chapters, he hopes to recruit more members and to brainstorm ideas about future SFT projects.

Another big upcoming project for SFT is their Free Tibet Action Camp, which takes place each year in India, Germany, and the US. The camp in India seeks to train future Tibetan and Indian activists in how to effectively move forward with the Tibetan movement. During the one-week training, attendees are taught constructive ways to fight for their freedom, approaches to take when speaking with the media, creative ways to cultivate grassroots movements, and skills for using technology securely and effectively.

Tseten said that the Action Camp mobilizes and energizes the young activists. "It makes them more determined, more focused on our cause. Our struggle has been for 52 years. Many of us, born here, have never seen Tibet but we still have that vision that tomorrow, we will free Tibet...they have not only patience and courage but also smarts, strategy, and the knowledge of how to work in the best way with our limited resources."

In terms of SFT's political outlook, Tseten alluded to the recent self-immolation incident to make his point. In a place where people feel compelled to burn themselves to death in protest of the atrocities occurring inside Tibet, Tseten said, "we believe there is no point where we can ever live with the Chinese communist regime."

"We don't believe what China is doing. We have been having dialogue since 2001, but nothing concrete is coming out."

He spoke of the large-scale protests that occurred in Tibet in 2008, when more than 200 Tibetans were killed by the Chinese government.

The White Wednesday movement, "Lhakar," exemplifies the desire of Tibetans to reassert their identity. Each Wednesday, Tibetans inside and outside of Tibet make an effort to eat Tibetan food, wear Tibetan traditional clothing, and to speak Tibetan.

"It sends a clear message that we are not Chinese. It's very strong," he said. He added that since 2008, "the direct protests have gradually changed into non-cooperation and civil disobedience, which is really strong."

"Our vision is very clear. We fight for freedom no matter how much it takes, time or resources. I personally believe that now we are stronger. When people say that China is strong, they have to understand how much we have grown also. Now we have people, Tibetan youth, activists, and supporters everywhere. We have more skills and knowledge and in that way we have the strength to fight," he asserted.

When asked about his vision for strengthening SFT India, Tseten emphasized the importance of focusing on communicating more effectively with Tibetans inside Tibet. Through their Tibet Action Institute project, SFT trains their leaders in exile in staying secure when using technology, as China spends vast sums of money every year on Internet censorship and security in an effort to stop information flow that does not support their agenda.

"Now we are focusing on how to give these technological skills inside Tibet," he said.

He also emphasized the importance of reaching out to the Indian community, encouraging them to realize that Tibet is a key issue for India and to speak up to their leaders.

He said that India and Tibet have a long historical relationship and that Tibet looks to India as a source of knowledge about Buddhism and spiritual principles. "We know Indians. Indians know us," he said. "The human relation is so strong between India and the Tibetans...we have a culture that we share."

When Indians realize the truth of the situation, they are completely supportive of the Tibetan people. Tseten said that initiatives like the Little Lhasa trip, during which Indian students and professionals come to Dharamshala to spend time with government officials and NGOs, help educated Indians on the Tibetan issue.

"We don't need much effort [to convince them]," he said. "Only they need to come and see and they can support fully."

Speaking about the importance of youth participation in the Tibetan struggle, he stressed that during the 2008 protests in Tibet, more than 70% of the participants were youth.

Before the 2008 protests, he said, many Tibetans didn't have much knowledge about independent Tibet or the Tibetan issue.

"They knew about Buddhism, about His Holiness the Dalai Lama, but not about history. Even without knowing anything, though, they realized that this type of injustice was wrong."

He said that after 2008, Tibetan youth has a strong sense of being Tibetan. "We are still Tibetan. All of the policies that China has tried to do, they cannot change us."

The work of activists

Staying in exile is a challenge, Tseten said. Living outside of one's homeland in another culture can cause some people to be disheartened.

There is no Tibetan that does not dream of returning to a free Tibet, he said, but making that a reality takes work; it is something Tibetans must earn.

Stressing that activists now have the advantage of education, he said that Tibetans "are now at a stage where we can hit back. Be more offensive."

"In that way, being a leader, being an activist, it's our work to bring the hope alive, to bring the fire alive that we can one day go back, that our country will be free one day."