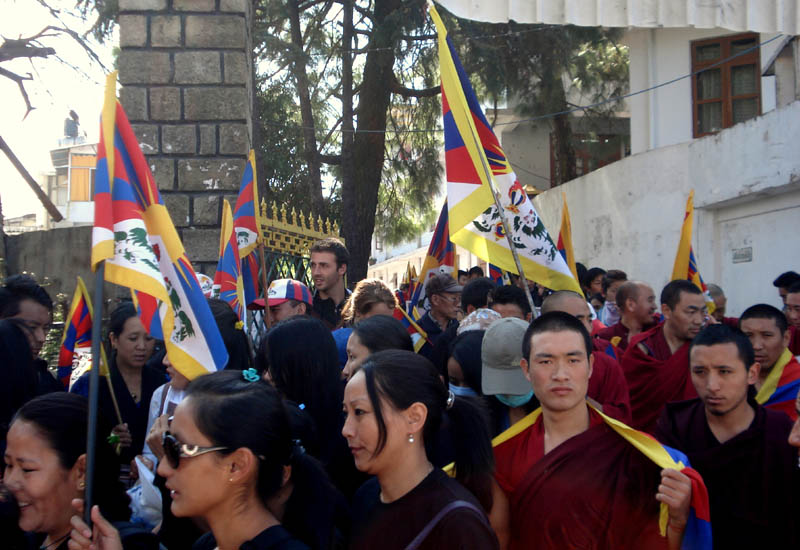 The vigil, organised by the local Tibetan Youth Congress (TYC), began at the bus stop in upper Dharamshala (home to a large exiled Tibetan community) and made its way down to the town's main temple.

Speaking at the event, Mandie McKeown from the International Tibet Network, called for coordinated global intervention to stop the unprecedented atrocities being carried out in Ngaba. "China ignores governments that speak out, even punishes them, [that's why] governments have to act together so that China is forced to listen" she said.

Earlier in the day, a large rally was held demanding the Chinese government to end its repressive policies in Ngaba county, western China. Protesters set off from the main temple in upper Dharamshala, carrying Tibetan national flags and shouting slogans demanding Tibet's independence and international intervention in the ongoing crisis in Ngaba.

In a statement, the TYC recognised the "horror and grief" of the self-immolations. "We in exile stand with [Tibetans living under Chinese occupation] in solidarity and honour their sacrifices by raising our voices in the freedom struggle for Tibet."

"China's systematic repression and tyrannical rule in Tibet - stationing officials in the monasteries, disappearing monks by the hundreds, shutting down phone lines, cutting off the internet, installing surveillance cameras and military checkpoints everywhere have driven Tibetans to breaking point," said Tashi Wangden, president of the TYC in San Francisco.

Many Tibetan businesses in Dharamshala closed as a sign of solidarity with the Tibetans inside Tibet.