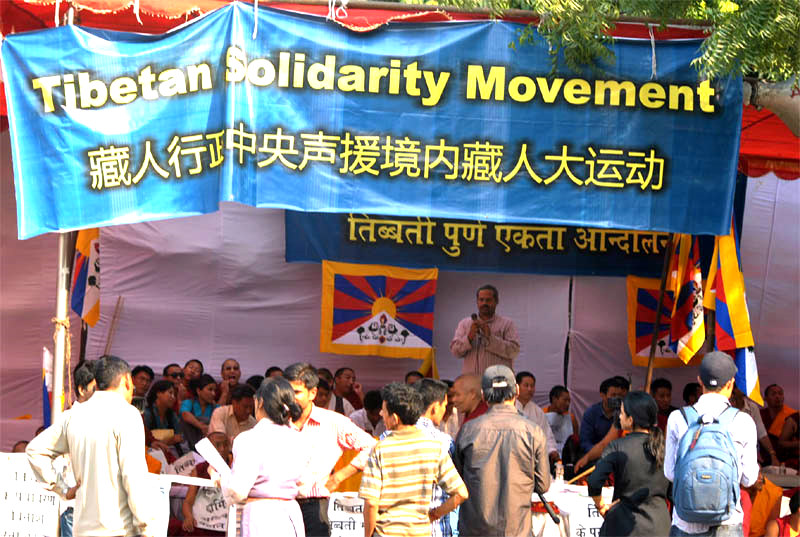 Dharamshala: - The Tibetan Parliament-in-Exile under the banner of Tibet Solidarity Movement is organising a series of activities in New Delhi to express solidarity with plight of the Tibetan people inside Tibet and to highlight the grim situation prevailing there.

A Tibetan Parliamentary delegation and Tibetans from different parts of India and Nepal have gathered in the Indian capital to carry out the activities. The Tibetan parliamentarians are also visiting various embassies and prominent Indian leaders to apprise them of the situation in Tibet.

The repression in Tibet, particularly in Ngaba and Karze in northeastern and eastern Tibet this year, has pushed nine young Tibetans to commit self-immolation in protest. Five of these young Tibetans died and the fate of other four remain unknown. All of them raised slogans demanding freedom in Tibet and the return of His Holiness the Dalai Lama to his people and homeland.

Speaking to the media during a 24-hour fast at Jantar Mantar in New Delhi yesterday, Mr Penpa Tsering, Speaker of the Tibetan Parliament, said "The Tibetan Solidarity Movement is deeply saddened and moved by the recent tragic acts of self-immolation by monks of Kirti Monastery in Ngaba District, northeastern Tibet. We are gravely concerned about the deteriorating situation inside Tibet that has driven the Tibetans to such desperate acts."

"We strongly urge the People's Republic of China to respect the fundamental right of the Tibetans to freely practice their religion and to review its existing policies in Tibet in order to fulfill the aspirations of the Tibetan people for a truly harmonious society ," he said.

He further called on China to allow international independent fact-finding delegations and media to visit Tibet and in particular Kirti Monastery. He urged China withdraw Chinese military from the Kirti Monastery and clarify the condition and whereabouts of Lobsang Kalsang (age 18), Lobsang Konchok (19), Kelsang Wangchuk (17) and Norbu Damdul (19), who have self-immolated in protest against it's repressive measures. (Fact sheet on self-immolation incidents in Tibet).

He appealed to governments and the United Nations to call on China to genuinely uphold the international human rights standards.

The situation inside Tibet has been deteriorating since the 2008 uprising. It has become even more urgent with increasing cases of self-immolation by young Tibetans who are using this extreme method of protest to raise their voice against the oppressive Chinese regime. Tibetans in Tibet are driven to these drastic acts to resist political repression, cultural assimilation, economic marginalization and environmental destruction.

The Kirti monastery in Ngaba District in northeastern Tibet is the site of seven self-immolations this year. The monastery witnessed large scale non-violent protests, many of whom were subsequently detained. The movement of the monks is strictly controlled and the monks are being subjected to "Patriotic Re-education campaign". Reportedly, there is a huge Chinese military presence inside the Monastery where they have outnumbered the monks. This appears to be a long-term strategy as residential quarters are being constructed within the premises of the monastery.

On 19 October, over 3,000 Tibetans from all over India and Nepal will take part in the Global Solidarity Fast at Rajghat followed by peace march led by Tibetan monks and nuns.

On 20 October, Tibetan women will lead a peace march from Samta Sthal to Jantar Mantar followed by a day-long prayer service. Young Tibetans will carry out a similar activity the next day.