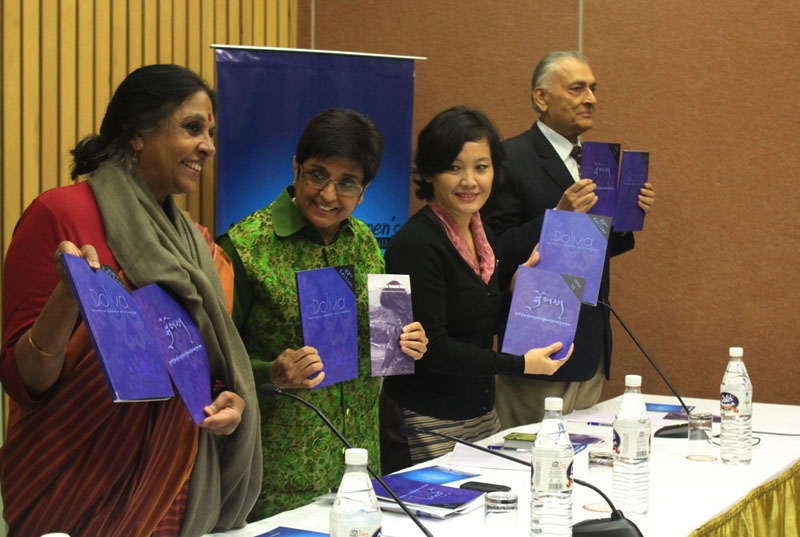 The concluding ceremony of the training session was held in the form of a symposium at the India International Centre with panelists being Dr. Kiran Bedi ( Social activist and retired Indian Police Officer), Youdon Aukatsang (Member of the Tibetan Parliament-in-exile), Jaya Jaitley (Political activist and former president of Samta Party) and Vinod Saighal (Writer and Retired Major General, Indian Army).

The Advanced Tibetan Women's Leadership Training (ATWLT), the second in the series, an undertaking of Tibetan Women's Association (TWA) reached its pinnacle yesterday with the concluding ceremony in the form of a symposium held at the India International Center, Lodhi Road.

Moderated by Dhardon Sharling, Member of the Tibetan Parliament-in-exile and Research and Communications officer of the TWA, each panelist gave their opinion on the topic - Women's Leadership in the 21st Century, a Noble Achievement,' in the symposium that lasted 90 minutes.

"I respect the way you are carving your life and fighting for your own value system, stated Dr. Bedi. She stressed that while men boast of the ‘3 Ms - muscle, money and mobility', women are bestowed with 3 'H's - head, heart and hand'.

In response to a question on the dwindling Indian political support for the Tibetan cause, Dr. Bedi reiterated the crucial role of the Tibetans in India who are making outstanding contributions to their host country to show great appreciation and to gauge support of the Indian government and people. "You should all be Dalai Lamas in India and make India proud" she said.

"It's time for women to lead from the back and the front and thereby fit into all realms of the political arena", said Youdon Aukatsang, the young member of the Tibetan Parliament in exile.
Jaya Jaitley advised that Tibetan women should embark on reaching out to the oppressed women of South Asia. "As women belonging to a group whose rights have been violated you should reach out to the suffering women," she stated.

Answering a question on the political clout surrounding India and Tibet, Vinod said, "Albeit the Indian politicians have remained silent, but they are slowly but surely finding that the freedom of Tibet is in India's interest."

Two TWA publications - Purging the Treasure House, Displacement and the Status of the Tibetan Nomad and the English version of 'Dolma Magazine: The intellectual Expression of and for Tibetan Women were launched as a part of the finale.

Participants came from various backgrounds like graduate students, political activists, settlement officers, journalists and much more and they were trained in three areas - Identifying , Building and Practicing leadership skills.

It proceeded to exposure trips, event management, lobbying Indian leaders and the panel discussion with Indian and Tibetan women leaders.

Highlights included active participation in the NDTV studio debates such as ‘NDTV special ‘Is Tibet a lost cause,' chaired by Barkha Dutt' and ‘NDTV Left, Right and Center' hosted by Nidhi Razdan.

"The TWA led training was a monumental success in transforming young women into potential leaders," said Yeshi Choedon, an NGO worker based in Pokhra, Nepal.
Tibetan Women's Association (TWA) is the second largest Tibetan Non Governmental Organization (NGO) based in exile in India and the only Women's NGO in Tibetan history. Founded in 1959 in Tibet with a motto of ‘Advocacy For Home, Action In Exile,' it is now a 16,000-member organization with 56 chapters in across Asia, North America, Europe and Australia.