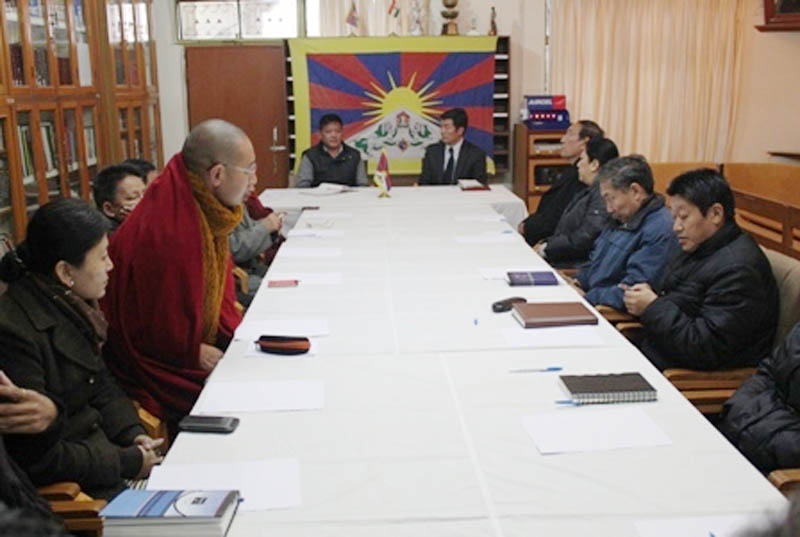 Dharamshala - 16 February 2012. Chinese security forces have been increasing their efforts to deny Tibetans their freedom of expression in Tibet. In the past week, there has been an outbreak of beatings and detentions committed by the Chinese government.

On 13 February at around 2.30 PM Tibetan time, Chinese security forces extinguished the monk Lobsang Gyaltso, who had chosen to self-immolate in protest, by beating him savagely.

Lobsang Gyatso had shouted words of protest against the Chinese government before self-immolating, according to a press release by the Tibetan Parliament in exile. After being beaten, he was taken to an undisclosed location.

Lobsang Gyatso is a 19-year old monk of the Kirti Monastery in Nagba County. He was the oldest of four siblings, and was described as "one of the brightest in his class."

At the same scene, a pair of Tibetan youth and another monk were likewise beaten by Chinese police. One of the youths was able to escape with the help of onlookers, but the other was detained by security forces.

Nagba County is now in lock-down and random searches are being conducted by Chinese police.

On 11 February at around 11.00 AM Tibetan time in Karze County, Tashi Palden, openly protested the Chinese occupation, demanded a return of His Holiness to Tibet, and declared that, "Tibet needs freedom." As a result, Chinese police brutalized him and removed him to an undisclosed location.

At the same scene, and unidentified businessman was also beaten by security forces and removed to an undisclosed location. Sources allege that the Chinese police "confiscated" a valuable coral necklace from this individual.

On 8 February in the afternoon, a group of Tibetans removed Chinese flags from a government building and a hospital in Akori Township in Choechen County. In addition, they distributed pamphlets about Tibetan independence to locals.

Chinese police arrived on the scene and began searches of the local population.

Earlier, many Tibetan pilgrims who had been visiting Nepal and India have been required to register with the Chinese government. About one hundred of these pilgrims have been detained by police and forced to pay for their own room and board. A group of ten to twenty has been detained indefinitely at the Nepal-China border.

In addition, a new policy in Lhasa has expelled many of the residents who come from Kham and Amdo regions.

In a press conference with Chinese Prime Minister Wen Jiabao on the 14 February, Jiabo claimed that, "What is happening in Tibet is being caused by a few monks encouraged by external forces. Their goal is to destroy the peaceful society that is developing in Tibet, which benefits neither Tibet nor the Tibetan people."The Tibetan Parliament responded by saying that, "Jiabao and the Chinese Government clearly have no interest in reviewing the causes of violence in Tibet, and they have constantly ignored our requests to do so. Instead, Jiabao and the Chinese government lie to cover up what is happening by saying that those monks who self-immolate are alive and well."

"A good example exists in 2008, when Jiabao claimed that the Chinese were not shooting at the Tibetan people, despite graphic, photographic evidence of dead Tibetans."

"If they want to realize why there is no peace inside of Tibet, they cannot accuse outsiders. They need to see the anger and frustration inside of Tibet for themselves. The best way that they can do this is to allow international media and researchers into Tibet, and allow those people to show them what is happening."

The Tibetan Parliament-in-Exile and the Kashag on Thursday, February 14th have jointly held a day-long meeting in view of the critical situation in Tibet, according to the Tibetan official media. Mr Penpa Tsering, Speaker of the Tibetan Parliament-in-Exile and Dr Lobsang Sangay, Kalon Tripa, chaired the meeting attended by Kalons (members of the Kashag) and Parliamentary Standing Committee at the parliamentary secretariat. Extensive deliberations were held on efforts to be made by the Kashag and the parliament in view of the unending critical situation in Tibet and other important issues.