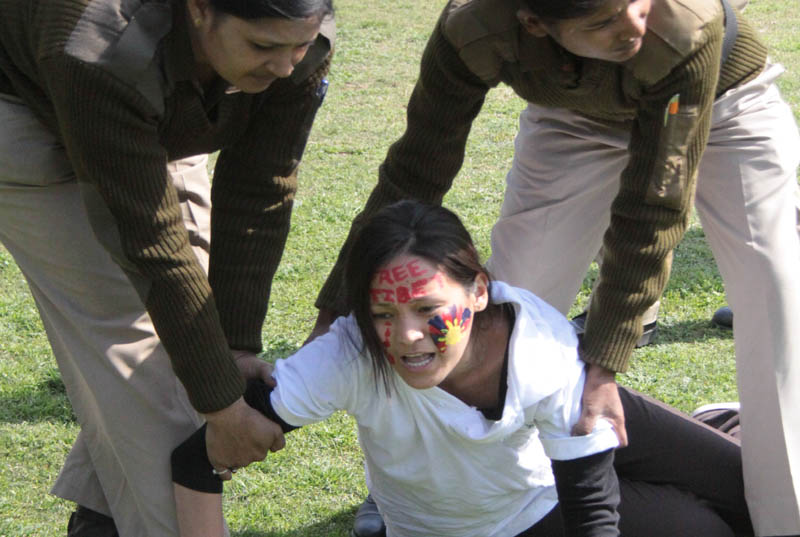 Delhi: - Forty-eight Tibetan Youth Congress (TYC) members stormed the Chinese Embassy in New Delhi this morning at 11:30 to protest the arrival of Luo Huining, governor of Qinghai Province in the capital city of India.

Members of the Regional Tibetan Youth Congress, Rohini attempted to jump the gate of the Embassy while shouting slogans such as "Luo Huning go back", "Free Tibet", Stop killing Tibetans".

The protests by New Delhi Tibetan college students lasted roughly 20 minutes each followed by New Delhi police arresting all participants. Many of the students received severe beatings from the Delhi police at the time of arrest rendering one of them in a serious condition who, had to be rushed to the hospital.

Qinghai Province has witnessed two self-immolations and large-scale protests in the beginning of this year alone. Sonam Wangyal also referred to as Sopa Rinpoche, from Darlag County, a respected religious figure in his 40's drank kerosene and set himself on fire on 8 January and Sonam Rabyang, a monk from Yuthung Villgae, Lab Township in his 30's self immolated on 9 February. While Sopa Rinpoche died that same day, the fate of Sonam Rabyang is unclear.

We wanted Mr. Luo to know that "these events of self immolations and resistance inside Tibet should be viewed by the government of China as very, very serious threat and understand the potential magnitude that this represents," said Jigme, Cultural Secretary of the Tibetan Youth Congress.

"The sacrifices of these warriors clearly exemplify that no amount of brainwashing, propaganda or so-called development or violence, threat and oppression has penetrated the minds and souls of the Tibetan people who will continue to rise up and resist as long as the occupation of Tibet persist".

"While situation inside Tibet remain dire and tense, for a Chinese leader to come to India as a delegation representing Tibetan Carpet at the India Carpet Expo scheduled to be held from 17-20 February 2012 is not only insensitive but arrogant and distasteful," Jigme added.

Although the students are currently detained in Chanakyapuri police station, it appears that they will later be transferred to Tihar Jail. The group consisted of 25 girls and 23 boys all in their early twenties.