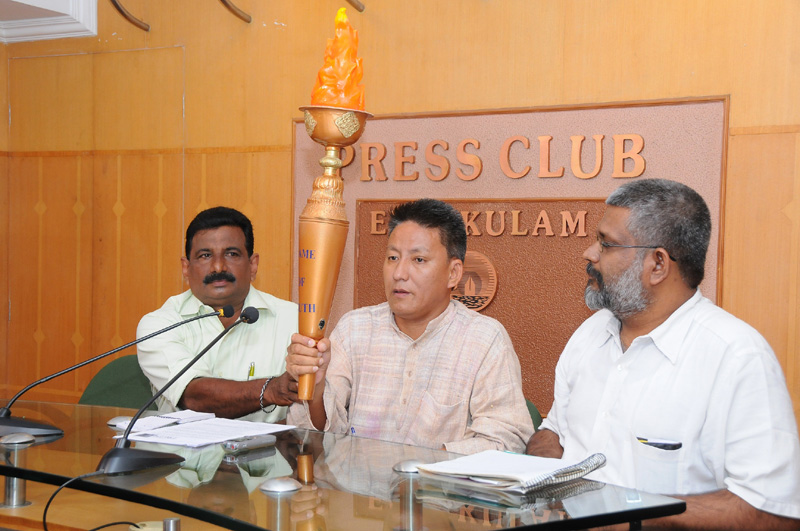 Dharamsala,July 6, 2012, 11:00 a.m: On the auspicious occasion of the 77th birthday of His Holiness the Dalai Lama, Tibetan Member of Parliament in exile, Mr. Karma Yeshi addressed The "Flame of Truth" relay's press conference at the Cochin Press Club.

Mr. Yeshi spoke of the relay's commencement on the propitious event of His Holiness the

He also extolled on the present conflagration of protests within Tibet due to the ever-intensifying Chinese occupation along with the routes, relay schedule and demands of the campaign.

Along the course of the conference, the "Flame of Truth" torch was presented and unveiled to the media, followed by a question and answer session. Mr. Yeshi also spoke with members of Friends of Tibet, India and local Tibetans regarding the collection of signatures through the "Flame of Truth" relay. This signature campaign listed the following demands to be forwarded to the UN member states and Secretary General.

1. The United Nations must discuss the issue of Tibet based on the
resolutions it has passed in 1959, 1961 and 1965, and must continuously make efforts to fulfill them

2. An independent international fact-finding committee must immediately be sent to investigate the ongoing crisis in Tibet

3. The United Nations must take special responsibility to ensure that the basic aspirations of the Tibetans living within Chinese-occupied Tibet are fulfilled.

The relay originated at the residence of former judge of the Supreme Court of India as well as former cabinet minister of the state of Kerala - V. R. Krishna Iyer. It was lead by Mr. Yeshi, members of Friends of Tibet, India, and
local Tibetan residents.

Mr. Iyer gave following message at the launching of the worldwide relay. He said, "Lord Buddha stands for the greatest blessings of God to humanity. Tibet as a nation and the Tibetan culture stands for the Buddha. His Holiness the Dalai Lama stands for humanity and compassion; human rights and human culture. And I wish he becomes popular in the whole world. He is not just an individual, nor the state, but he stands for global culture". He further stated that "The people of Tibet are dying, they are becoming slaves, and we cannot allow that. They are entitled for full freedom and we stand for that. Support its culture and independence. We are with them. May this Day grow more glorious!"

The 'Flame of Truth', which was launched from Kochi, will further travel to Coimbatore.