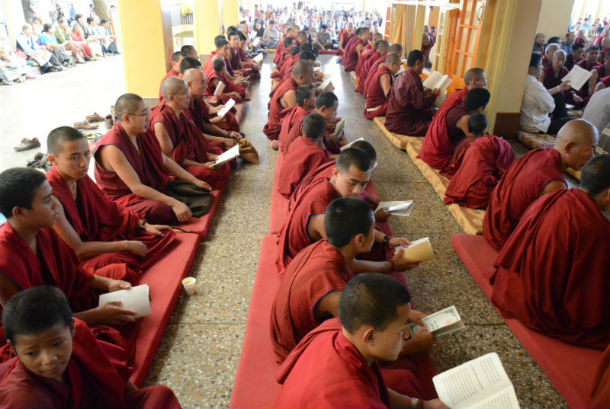 Dharamshala: - As a mark of respect and mourning, a prayer service was held On Friday, August 2nd, at the main Tibetan temple of Dharamshala for the death of a young Tibetan man from Nyalam county, U-Tsang region, Central Tibet who recently self-immolated in Yulshul county, eastern Tibet.

Tibetans and supporters living in Dharamshala, and officials of the Central Tibetan Administration were attended the event  to express prayers, sympathy, support and solidarity with Tibetans in Tibet, particulaly family members and relatives of those brave tibetans who had sacrificed their precious lives for freedom and all those who continue to suffer in their homeland.

A report published by the Central Tibetan Administration said that it has 'organised a prayer service to condole the recent death of 22-year-old Ngawang Norphel, a young Tibetan from U-Tsang, central Tibet and other Tibetans who self-immolated against the Chinese government's repressive policies in Tibet.'

'Ngawang Norphel, 22, a native of Zurtso Truldul village, Menphuk township, Nyanang district, succumbed to severe burn injuries at a hospital in Siling on 30 July. Tenzin Khedup, 24, who also self-immolated with Ngawang Norphel on 20 July, died on the spot.'

In a graphic video footage recently obtained by the Central Tibetan Administration, based in India, seriously burned Ngawang Norphel articulates the reasons for their self-immolation: the survival of Tibetan culture, language, and identity. "[This is] for the sake of Tibet.

"We are in the land of snow. If we don't have our freedom, cultural traditions and language, it would be extremely embarrassing for us. We must therefore learn them. Every nationality needs freedom, language and tradition," he said. The video footage can be viewed by clicking here.

The prayer service on Friday at the 'Tsuglagkhang,' the main Tibetan temple was attended by entire officials of the Central Tibetan Administration. "We express deep condolence and solidarity with all those Tibetans who have sacrificed their lives of the just cause of Tibet," the department of religion and culture said in a statement.

Since 2009, atleast 44 Tibetans in Tibet have set themselves on fire in protest at Chinese repressive policies, according to the Central Tibetan administration.

'There have been confirmed reports of 46 self-immolations in Tibet since 27 February 2009, the Tibetan female writer, Tsering Woeser told US based Radio Freee Asia Tibetan service, citing that a foreign reporter who recently visited Drakhar Monastery in Minyak Lhagang, Kham region of Tibet witnessed about the self-immolation protest staged by Thubten Nyandak Rinpoche, 45, and his niece, Atse, 23. "There is an unknown confusion when counting the numbers of self-immolations in Tibet," Woeser said.

There is still some confusion and misinformation while some organisations and individuals are confirming such reports, particularly when making their confirmation over reports of death and survival of those Tibetans who have been staged self-immolation protests in Tibet recent years, Mr Nyima T.J, a Tibetan political analyst said. "All of these problems that create the confusions due to the harsh censorship restrictions imposed by Hu Jintao's communist regime, which is known as one of the worst dictatorships in recent history," he added.