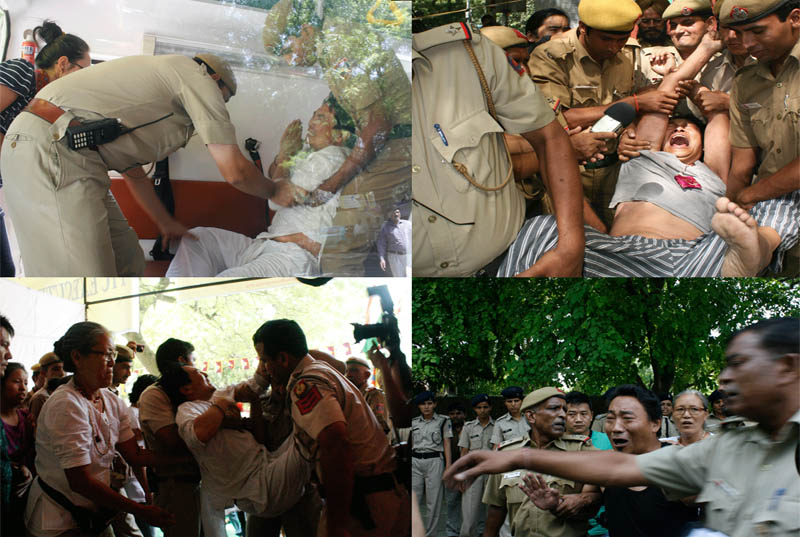 New Delhi, 23rd September, 2012: The largest Tibetan NGO in exile, 'Tibetan Youth Ccongress' (TYC) Indefinite Hunger Strike faced one of its most difficult days, when around 1pm, Sunday afternoon the Delhi Police came with their medical officials to have a check up done of the three fasting leaders," TYC said in a latest statement dated September 23rd.

"On checking their vitals and getting the readings, the medical officials had a discussion with the policemen and concluded that the Hunger Strikers had to be admitted in the hospital as their conditions were getting very serious. Special concern was for Penpa Tsering whose blood pressure was at a dangerous point, 160/110 and hence needed to be admitted in the hospital immediately," TYC said in the statement.

"Without giving sufficient time to the team of the Hunger Strike, the Police started herding the three Hunger Strikers into the ambulance," the statement said. "They managed to drag Penpa Tsering screaming "Bhoe Gyalo "at the top of his weak lungs, he put up a hard fight and fainted away out of exhaustion. Dhondup Lhadar used all the strength he had to hang onto the bed where he had been sleeping for the last 20 days. He pleaded hard with the officials to let him be and continue the hunger strike for Tibet and the Tibetans inside Tibet."

In the statement, TYC Joint-Secretary, Mr Tenzing Norsang said that "when Dhondup Lhadar ebbed his strength, he cried bitterly and protested the Police forcibly dragging him away to the hospital. The third Hunger Striker, Jigme Sholpa stole away from the side of the tent, trying his best to avoid admittance in the hospital and be able to continue the Hunger Strike until the UN and EU responds with strategies of action to deal with the crises inside Tibet and serve justice to the 6 million Tibetans under oppression."

"That was the way the Police were able to drag the three Hunger Strikers away to the hospital where yet again, using force they would inject the glucose and the treatment that these men are not willing to subject their body to," it further added.

"Once the Hunger Strikers were dragged away with force, the police came back with a truck to force TYC to terminate the Indefinite Hunger Strike. TYC executives tried peddling with the Police Officer to let them stay on but deaf ears were thrown their way. They were not willing to budge which was quite evident from the huge number of police reinforcement. Tents were pulled down and bags packed. With a heavy heart the rest of the TYC team had to do something which they were totally against.

At the Dr. Ram Manohar Lohia Hospital, where the three Hunger Strikers were put away in the emergency ward, Dhondup Lhadar, Penpa Tsering and Jigme Sholpa had every intention to continue with the hunger strike from inside the hospital despite the sad condition of the wards of the government hospital. The Police did not let that happen and using coercion and injected glucose and the necessary fluids into their bodies."

Joint Secretary, Tenzing Norsang shared his feelings openly on behalf of the TYC team, " The Indefinite Hunger Strike was started from the 3rd September, 2012 and from day one the Hunger Strikers and the entire team working for the crises in Tibet and for the Tibetans inside Tibet have been facing hindrances one after the other.

Today when they forcibly took away the three fasting leaders to the hospital and got them admitted and medically treated unwillingly and packed us away from Jantar Mantar, means that the Indefinite Hunger Strike is only temporarily discontinued.

Our demands and appeal will see their daylight when actions are taken by the UN and EU to deal with the crises in Tibet and for that we will continue our activities as long as it takes. TYC has already met the UN, EU and heads of different embassies and we have standing appointments to meet the officials of many more countries' embassies.

The Indefinite Hunger Strike and all the effort put in through various activities seems to be yielding results when the issue of Tibet's current situation and the brutality on the Tibetans there, was brought up on the 17th September, 2012, at the UN Human Rights' Council's 21st session. To know that yesterday in Brussels, EU brought up the topic of Tibet's crises with the Chinese Premier Wen Jiabao is also of utmost importance. "