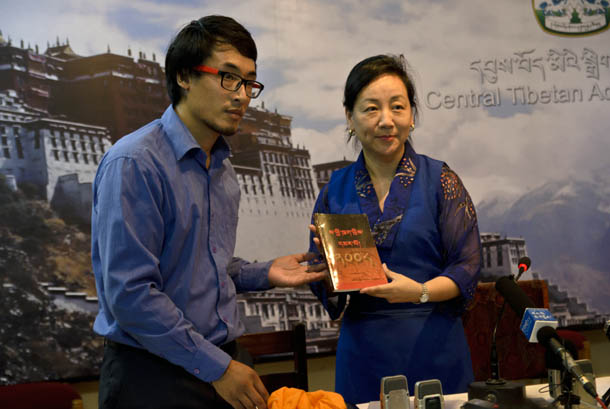 Dharamshala: - September 24, 2012, the Central Tibetan Administration organized a press conference in Dharamshala, India, the heart of Tibet exile to release a documentary film about the tragic series of self-immolations by Tibetans inside Tibet, with more than 50 Tibetans including monks, students, a mother of two setting fire to themselves in response to Chinese regime's hard line policies.

The Department of Information and International Relations (DIIR) of Central Tibetan Administration (CTA) released a documentary film titled "The Burning Question: Why are Tibetans Turning to Self-immolation?"

The 30-minute film depicts factual accounts of the spate of tragic self-immolations by Tibetans inside Tibet from 2009 till date.

The film puts spotlight on the underlying causes - the Chinese government's systematic repression of Tibetan language and religion, and forced resettlement of nomads in Tibet - which are pushing an increasing of number of Tibetans to set themselves on fire.

"CTA request to use the documentary film as much as possible so that it can reach reach a wide range of audience - nationally as well as internationally. The Tibetans who have set themselves on fire deserve all the attention of the international community and leaders. said Mr Tashi Phuntsok - Additional Secretary of DIIR.

Despite repeated appeals by the Central Tibetan Administration to refrain from drastic actions, over 51 Tibetans have now set themselves on fire in protest against the Chinese government's repressive policies.

On the same day, Ms Dicki Chhoyang, Kalon for DIIR, launched a new book on the 2008 Tibetan national uprising movements, the largest protests in Tibet for 50 years. The new book called "Red Blood Of The Earth Mouse Year" was written by Gangmingpa, a writer from inside Tibet and edited by Mr Tashi Delek, a journalist from South India.

"Whether short or long, now there are so many video clips, images and letters from Tibet...; about Tibetans in Tibet who have sacrificed their lives for our freedom and Human Rights, all are very important, therefore, I feel deeply honored to be here today" said Kalon Dicki Chhoyang.

"Gangming's articles explain the Tibetans' protests, their struggle and the Chinese severe crackdown on Tibetans in Tibet. He had managed to send and safely reached them in India together, just two days before his arrest," Tashi Delek told reporters.

Gangming still remain in a detention center since he was arrested by Chinese police. The authorities did not informed anybody why he was arrested, where he is being held.