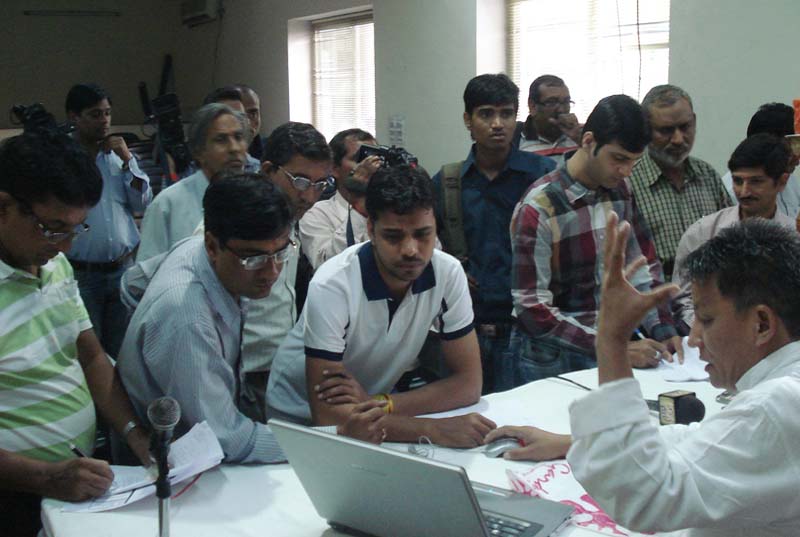 Jaipur, October 18: - Flame of Truth relay in Jaipur received supports from Speaker of Rajasthan State Assembly & Deputy Leader of opposition in the Assembly, Educationists, Students and Indian public, according to a report received by The Tibet Post International.

Mr. Karma on behalf of Tibetan Parliament in Exile (TPIE) briefed Mr. Tiwari on current grave situation inside Tibet and self-immolations taking place in Tibet. Mr. Tiwari signed the Tibet petition to be submitted to United Nations on December 10 and promised to continue his support in future.

On October 14 at 6.00 p.m. Tibetan delegation comprising of leaders of Tibetan sweater sellers led by Tibetan MPs visited Rajasthan Home Minister at residence to pay condolences for the demise minister's father. Mr. Karma on behalf of TPIE thanked minister for continuously supporting Tibetan refugees during their seasonal business in Jaipur.

On October 16 at 3 p.m. Mr Karma addressed around 30 journalists from different media at Pink City Press Club. He briefed journalists on current grave situation inside Tibet, 55 self-immolations in Tibet since February 2009, Importance of protection of Tibet's environment for larger interest of south Asian countries in particular and world at large.

He also appealed world leaders to stand behind Tibetan cause, if non-violence, peace and humanity have any value. He then presented pictures of self-immolations in Tibet and how Tibetan people are being tortured under brutal Chinese occupation on the computer. Media people took keen interest and raised many questions, which were responded accordingly. TV channels and many print and online media widely covered the conference.

To mark US Congressional Gold Medal award to His Holiness the Dalai Lama in 2007, Tibetans sweater sellers association organised a function at Tibetan Market on October 17 at 9.30. Programme began with prayers and incense burning Puja. Mr. Pema Lhakyap, president of Tibetan market spoke on the occasion. Later, as the chief guest of the day, Mr Karma spoke on live history of His Holiness the Dalai Lama, current situation inside Tibet and self-immolations in Tibet. Programme then concluded with prayers.

On October 17 at 11.20 a.m Tibetan delegation led by Karma Yeshi met Sh. Deependra Singh Shekhawat, Honouarble Speaker of Rajasthan State Assembly Mr. Karma also briefed him on current grave situation inside Tibet, self-immolations taking place in Tibet and submitted memorandum on the issue of Tibet. Sh. D. S. Shekhawat signed the Tibet petition and expressed his solidarity with the just cause of Tibetan. He also promised to forward memorandum to the External Affairs Ministry of Government of India.

On October 17 at 12 noon, Mr Karma visited Rajasthan University and delivered a lecture to the students (50) and professors (10) on the issue of Tibet and how Tibetans practice democracy in exile. He also stated to the gathering that Tibetan people inside Tibet under Chinese occupation enjoy no freedom of any kind. He also responded to the questions of the teachers and students and interactions went for almost two hours.

He also informed the gathering on Flame of Truth relay campaign initiated by Tibetan parliament. Later teachers and students signed the Tibet petition to be submitted to UN on December 10. Lecture was chaired by Prof. Preeti Joshi, head of the Public Administration department and Dr. Om Mhela, lecturer of the university. In the end President of University Students Association thanked Tibetan MP for his talk and gave assurances that Indian students and general public are always with Tibetan people in their struggle.

On October 17 from 6.30 to 7.30 p.m. Tibetans organised Flame of Truth relay and Candle Light Vigil at Udyog Maidan near statue circle. Programme began with Tibetan and Indian national anthem. On minute silence was observed to pay tribute to Tibetan martyrs, who laid their lives for just cause of Tibet. Pema Lhakyap, President of Tibetan Market gave introductory speech. Later Karma spoke in English and Tibetan.

In his speech he stated that no occupation will last forever and time will definitely come to Tibetans. He also spoke on Flame of Truth relay campaign initiated by Tibetan Parliament. Later Tibetans recited prayers and prayer of truth composed by His Holiness the Dalai Lama. Vigil ended with slogans - "Long Live His Holiness the Dalai Lama". Leaflets in Hindi were distributed to local Indians. There were over 200 Tibetans who took part in the vigil. Many media covered the event widely next day.

In Rajasthan, Flame of Truth torch travelled to Jodhpur, Udaipur and Jaipur. During the tour, Tibetan campaign received support and solidarity from political leaders, scholars, lawyers, journalists, students and local people. During the tour, leaders and members of temporary Tibetan Refugee Market associations supported and joined relay in big scale.

On October 18 evening Tibetans escorted Flame of Truth torch to Jaipur railway station for its next journey to Bhopal, capital city of Madhya Pradesh state."