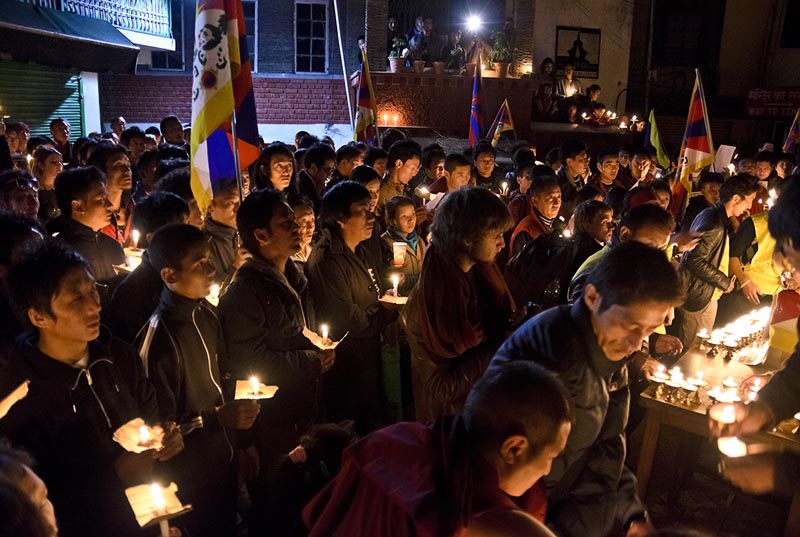 Dharamshala: - Amid a month of escalating protests in Tibet in the form of self-immolations, the exile community of Dharamshala has responded in unity and symbolism. Lining the streets with candlelight vigils and alliance, Tibetans in exile have proven that those facing suppression and loss in their homeland will not be forgotten.

Marking the emerging news of a double self-immolation on Thursday 26th of October in Nagchu prefecture, Tibet, the community of Dharamshala o continued to show enormous support; closing shops in respect, and taking to the streets.

Numbering at least 500 attendees, Saturday 28th October marked the day when news finally emerged of the protest which had occurred the previous Thursday.

Amid a month of escalating protest in the region, which has witnessed the self-immolation of at least 62 Tibetans since 2009, two young men; Tsepho aged 20, and Tenzin aged 25, took to the streets of Nagrog Phampa village in Driru County, eastern Tibet and self-immolated against Chinese rule.

Responding in Dharamshala, holding aloft empty coffins draped in Tibetan flags, the streets of the exile community were illuminated once again with candlelight and unity.

Upon the final destination of the peaceful march, a series of speeches were made by members of the Regional Tibetan Youth Congress.

Political activist Tenzin Tsundue highlighted the urgency of the situation in Tibet, highlighting the manner in which the west is ‘directly funding the economy of China', and the desperation Tibetans are facing to take to such extreme measures.

Tsundue also highlighted the manner in which organisations such as the United Nations are ignoring the crisis in Tibet; largely due to the power and funding of economic giant: China.

After a series of speeches, a minute of silence for those who had self-immolation, and songs of unity, a quiet prayer service was held for those who had sacrificed everything for their homeland. As the number of Tibetans self-immolating surpasses 62, one can only speculate when intervention and change will occur for Tibetans to have even basic human rights and freedoms.