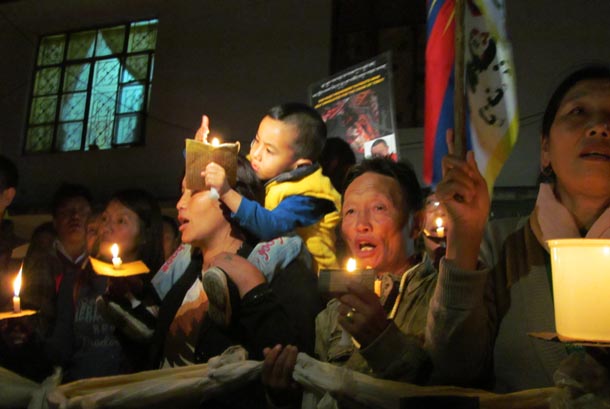 Dharamshala: In response to the emerging news of yet another self-immolation from within Tibet, the exile community of Dharamshala; host of the Tibetan Parliament in exile and home to His Holiness the Dalai Lama, took to the streets to pay their respects.

Reports have emerged on November 4th 2012 of a self-immolation in the Amdo region of Eastern Tibet. Sources state that 25 year old Lhundup Dorjee; a male farmer from the Rebkong district (Amdo) set himself ablaze in protest to Chinese rule.

Sunday 5th November witnessed around 400 Tibetans lining the streets of Dharamshala - India, with a candlelight vigil; connected by a series of Tibetan traditional prayers scarves. Symbolically, a young Tibetan man was hoisted aloft on a stretcher covered in black makeup to represent the visual image of a self-immolator, and carried through the streets.

As his body passed, members of the community placed prayer scarves onto the young actor, who powerfully provoked an image of the reaction to self-immolation within Tibet.

The community respectfully wound their way down to the main temple courtyard where a series of prayers and speeches were made, led by organisers of the event the Regional Tibetan Women's Association and the Tibetan Youth Congress.

It has emerged that Lhundup; who was a native of Rebkong in Amdo, was the father of two young daughters; aged just 4 and 2 years old. He is also survived by his wife; Yangmo Tso; aged 26.

The self-immolation of Lhundup Dorjee highlights the latest act of fiery protest which Tibetans are using to reflect the extreme measures and pressures those in the region are facing under Chinese rule.

Amid a shifting government in Beijing, pressure is mounting for a solution to the deteriorating situation. The exile community of Dharamshala has remained poignantly united as the numbers of self-immolations appear to rise during the cutthroat transition period for Chinese leadership.