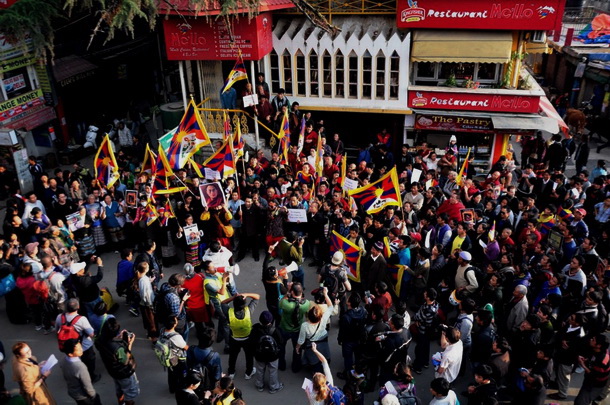 Dharamshala: Amid a shifting handover of political power in Beijing, this week alone has witnessed at least 7 reports of self-immolations in Tibet in response to Chinese rule. November 7th and 8th alone witnessed six cases of the fiery form of protest; one however is still unconfirmed.

Marking the wave of self-immolations emerging from Tibet, the exile community of Dharamshala took to the streets on the evening of November 8th with a peaceful vigil and prayer service.

Highlighting their respect for brothers and sisters in within the land of snows, the community of Dharamshala; home of His Holiness the Dalai Lama and seat of the Central Tibetan Administration, closed businesses for the day and led a series of marches through the town.

The event was organised by the regional chapters of the Tibetan Women's Association, Tibetan Youth Congress and Students for a Free Tibet (India). Holding aloft Tibetan flags and images of those who had self-immolated, the community witnessed hundreds taking to the streets in support and solidarity.

The peaceful protest was concluded with a prayer service the Main Temple (Tibetan: Thegchen Choeling Tsukla Khang). In a press release, the organisers highlighted the deteriorating situation in Tibet, stating:

‘Decades of intense suffering in Tibet has led many Tibetans to feel compelled to engage in extreme acts of protest, reflected in the ever-increasing wave of self-immolation protests taking place.'

‘The immolations are intended at sending out a strong message to the new leadership taking part in the Congress' stated Lobsang Choedak recently, spokesman for the Tibetan government in exile.

As the Chinese Communist Party Congress is about to commence, the harrowing number of Tibetans willing to sacrifice their lives in a bid to voice their protest under Chinese rule looks to rise; at least 69 using self-immolation as a form of protest since 2009.