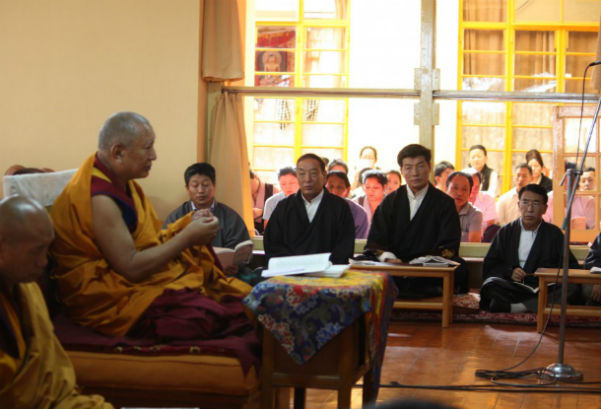 Dharamshala: A prayer service organised by the department of religious and culture to mourn and express solidarity with all Tibetans who have self-immolated for the cause of Tibet, on the afternoon of Wednesday 5 December.

The event was held in the exile community of Dharamshala; North India, convening during the afternoon at the Tsuglagkhang (Main Temple) with and attendance of several hundred Tibetans.

Mourning those Tibetans who self-immolated, and to show solidarity to those who have immolated, the Tibetan community of Dharamshala attended the event in their hundreds, including entire local populations of both monasteries and local Tibetan schools.

The prayers were headed by Kirti Rinpoche, and led by monks from Nechung Monastery. The Tibetan cabinet, including Sikyong Lobsang Sangay, attended the vigil, expressing that the event was held to show solidarity and to mourn those Tibetans who have lost their lives and suffered in Tibet.

During the event, which lasted one hour, the Department of Religion and Culture organised and offered 50 rupees each to the Tibetan monks and nuns of the gathering.

The prayers focused largely on the three most recent self-immolators, but included all those who had taken to the form of fiery protest. Prayers were also offered for long life of His Holiness Dalai Lama.

Since 2009, the toll of self-immolations has surpassed 92. The situation in Tibet remains tense, with a steep rise in self-immolations in the lead up and subsequent aftermath of the political handover in Beijing, on November 5th 2012.

The Central Tibetan Administration, led by Sikyong Dr Sangay, seeks to raise greater awareness internationally to the crisis, headed by programmes such as the 'Solidarity Campaign'.