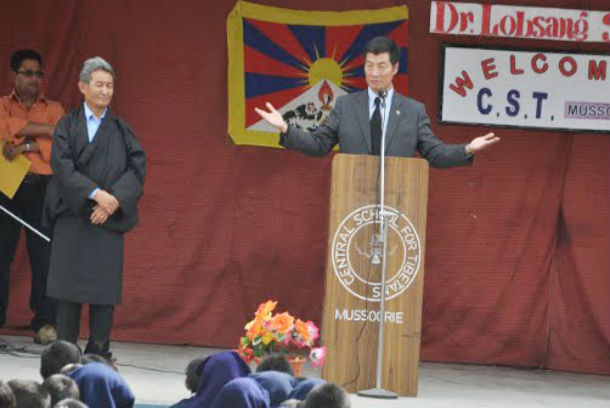 Dharamshala: - Addressing the Tibetan community during his visit to the northern Indian state of Uttarakhand, Sikyong Dr Lobsang Sangay, the political leader of Tibetans said the Central Tibetan Administration (CTA) is firmly committed to the Middle-Way Approach in resolving the issue of Tibet.

Dharamshala: - Addressing the Tibetan community during his visit to the northern Indian state of Uttarakhand, Sikyong Dr Lobsang Sangay, the political leader of Tibetans said the Central Tibetan Administration (CTA) is firmly committed to the Middle-Way Approach in resolving the issue of Tibet.

During his visit, the Sikyong addressed Tibetans living in Dekyiling, Rajpur, Mussoorie, Clement Town, Dhondupling, Lingstang located in and around Dehradun.

According to CTA, the Sikyong said the Middle-Way Approach is a far-sighted and pragmatic solution to the issue, envisioned by His Holiness the Dalai Lama through soliciting feedback from Tibetans inside Tibet and approved by the Tibetan parliament through a democratic process.

The approach seeks genuine autonomy for the Tibetan people within the framework of the People's Republic of China, the Sikyong said, adding that it is in sync with the then China's paramount leader Deng Xiaoping's position that, "except for independence of Tibet all other issues could be discussed and resolved."

He said the approach is supported by many prominent Tibetans inside and is steadily bearing results is in the minds of many Chinese people, in particular among the intellectuals. He said His Holiness the Dalai Lama's peace initiatives were supported some of the brightest Chinese intellectual luminaries, including Liu Xiaobo, the imprisoned Nobel Laureate, and scholars and writers in the form of more than 1,000 articles and opinion pieces.

The Sikyong said it is also enabling many governments to support a solution-oriented Tibet policy and helps them to raise the Tibet issue in their bilateral dialogue with China. He said US President Barack Obama has applauded "His Holiness the Dalai Lama's commitment to non-violence and dialogue with China and his pursuit of the Middle Way Approach," and encouraged direct dialogue to resolve long-standing differences and that a dialogue that produces results would be positive for China and Tibetans.

Sikyong Dr Lobsang Sangay, the democratically-elected leader and political successor to His Holiness the Dalai Lama, reiterated that Dharamsala is ready to engage in meaningful dialogue with Beijing anywhere and at anytime, adding that he considers the substance primary and the process secondary.

Speaking of some of the key achievements of the Middle-Way Approach, the Sikyong said it established contact and a series of dialogues between Chinese representatives and envoys of His Holiness the Dalai Lama. It facilitated thousands of Tibetan students and monks in Tibet to visit India and receive secular and monastic education, which also contributed to the revival of Buddhism inside Tibet and awareness about the Central Tibetan Administration, he added.

The Sikyong also said the Tibetan democracy in exile is a result of decades of efforts by His Holiness the Dalai Lama, adding that Tibetans in exile must utilise this democracy to show solidarity with and highlight their suffering of Tibetans in Tibet and forge unity at this critical period of our struggle.

He presided over a debate and elocution by students.

The Sikyong is scheduled to visit the Tibetan Children's Village school at Selakui near Dehradun.