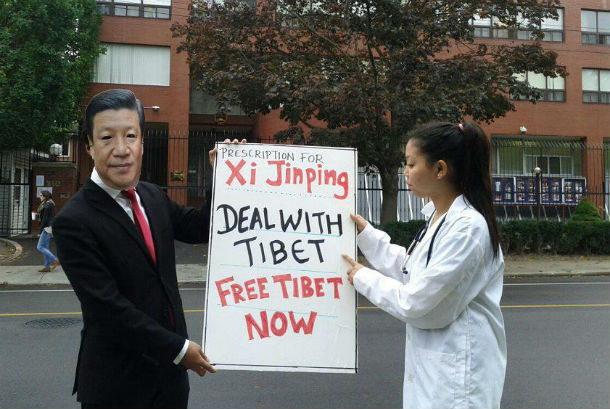 China must immediately stop its heinous attacks against Tibetans. According to reports, seven peaceful protesters were seriously injured and one monk was in critical condition after the Chinese police fired upon the unarmed crowd of Tibetans that had gathered to celebrate the birthday of His Holiness the 14th Dalai Lama. Reverence of the spiritual leader of Tibet continues to be punished in present day Tibet.

"This building here houses genocidal officials." said Rinchen Dolma, Grassroots Coordinator at Students for a Free Tibet (SFT) Canada, speaking of the Chinese Consulate. "His Holiness the Dalai Lama is not only a revered leader in Tibet but also a global icon of peace.
Millions of people worldwide celebrate his birthday. But Tibetans, living under Chinese rule, are denied this right.Peaceful monks and unarmed people are being shot at for celebrating this occasion. This is religious repression at its worst."

"Our government now has to heed the requests from our MPs in Canada for a multilateral forum to resolve this issue." said Urgyen Badheytsang, National Director of SFT Canada. "Canada needs to lead the multilateral forum to address this humanitarian crisis, and send our Ambassador for Religious Freedom into Tibet, now. An honorary Canadian continues to be vilified in Tibet, and people are being shot for revering him. Our government has to put its words into action."

When asked about the recent crackdown in Tibet, Mr. Shi Xiaoguang, an official at the Consulate from the Overseas Affairs Department said, "As a Canadian, you have no rights to interfere in China's affairs." and promptly ended the call.