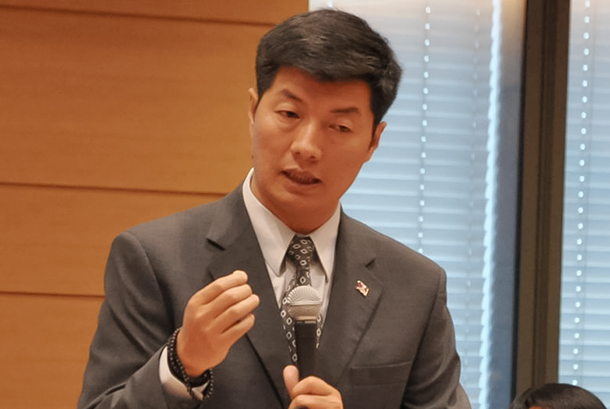 Dr Lobsang Sangay, the political leader of Tibet called on "Tibetans inside and outside Tibet to reaffirm their commitment to non-violence in the freedom struggle."

"On the auspicious occasion of Gandhi Jayanti, we offer our profound reverence to Mahatma Gandhi and gratitude to the people and government of India," Sikyong Dr Lobsang Sangay told reporters at a ceremony marking the occasion at the secretariat.

"Tibetans are leading a successful non-violent freedom struggle and we rededicate ourselves to non-violence," Sikyong said, adding, "the world trend has shown that countries regained freedom in their pursuit of non-violence."

Sikyong called on Tibetans inside and outside Tibet to imbibe and rededicate themselves to His Holiness the Dalai Lama's teachings of peace and non-violence."

Observing the commemorative event this morning at the Kashag hall, Dr Sangay said "we wish all Indians a purposeful Gandhi Jayanti".

The Sikyong along with his Cabinet Ministers, Secretaries of departments and senior staff members of the CTA attended the prayer service and offered traditional Tibetan white scarves to the portrait of Mahatma Gandhi.

Gandhi Jayanti on 2 October is also marked as the International Day of Non-violence as per a resolution passed by the UN General Assembly on 15 June 2007.