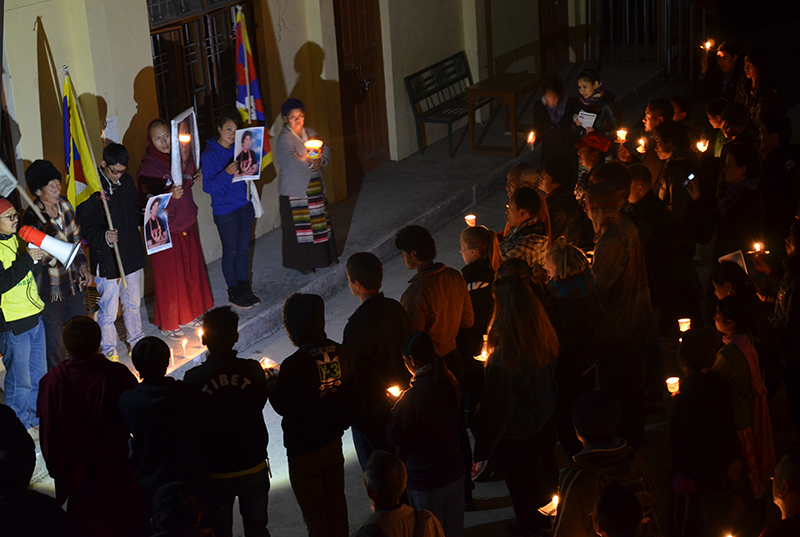 Dharamshala: – To honor the sacrifice of Konchok Tseten, the 30-year old Tibetan nomad who self-immolated in protest against Chinese repressive rule, Tibetans and supporters held a candlelight vigil in Dharamshala on the night of December 4.

Over 175 people took part in the solemn ceremony, which was organized by Students for a Free Tibet: India, the Dharamshala chapter of Tibetan Youth Congress, and the Dharamshala Regional Tibetan Women's Association.

According to information from sources in the region, "the Tibetan man who self-immolated on 3 December, died from his injuries on 5 December."

To commence the vigil, candle-bearing attendees holding pictures of His Holiness the Dalai Lama and Mr Tseten joined in procession around the McCleod Ganj's town square and offered prayers in Mr Tseten's honor. Sources from Students for a Free Tibet: India described it as an emotional and animated event.

The mourners then gathered beneath prayer flags and a glowing sunset, chanting prayers in unison in the name of Mr. Tseten. Speeches in both Tibetan and English provided an outlet for the assembly's grief, after which the vigil concluded.

Sources inside Tibet confirmed the immolation to be fatal. Despite Tibetans' efforts to protect Mr Tseten's body, Chinese police eventually were able to take the self-immolator into custody, arresting several Tibetans in the process.

In his speech at the vigil, writer and Tibetan activist Tenzin Tsundue discussed the power of nonviolence and noted the vigil's diverse audience, which included domestic and international attendees. He encouraged each individual to "take the message of love and compassion to your country, to your family, and to your friends."

Afterwards, Mr Tsundue noted the importance of the candlelight memorial in engaging the public: "International media will not carry... the message of self-immolation like this; therefore this is our top priority immediately." He continued, "What we are doing is a collective response from Dharamshala."

Vigil attendee Lobsang Tseten (no relation to Konchok), discussed his emotions while at the event. "I feel sad. 123 have immolated and China, instead of unearthing the reasons, blames His Holiness the Dalai Lama. I also feel angry. To be here in exile and know what people in Tibet are going through, no one wants to burn themselves but they are doing it out of desperation. But the world isn't listening."

Students for a Free Tibet: India's Program Director Tenzin Jigdal echoed these sentiments: "Self-immolations... since 2009 highlight the gravity of the situation in Tibet."