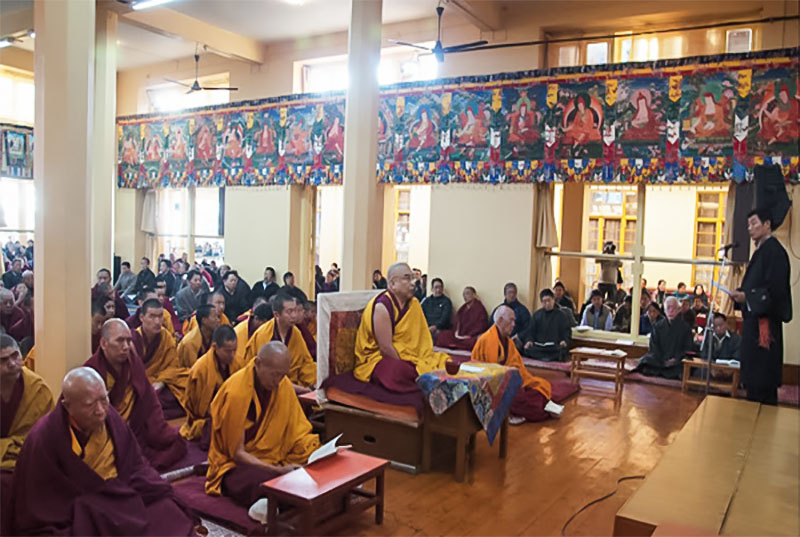 Dharamshala: - Speaking on Saturday December 7 at a prayer service for the Tibetans who have self-immolated in the struggle against China, the political leader of Tibet – Sikyong Dr Lobsang Sangay – called for unity and concerted effort to realise their aspirations. These include the return of His Holiness the Dalai Lama to Tibet and freedom for Tibetans.

A special prayer service organised by the Department of Religion and Culture of the Central Tibetan Administration was presided over by Tromthok Rinpoche, abbot of Namgyal monastery. Hundred of Tibetans, including monks, nuns, supporters, and the heads of the three pillars of Tibetan democracy were attended the prayer gathering at the main Tibetan Temple in Dharamshala as a mark of respect and solidarity with all those Tibetans who set themselves on fire for the just cause of Tibet.

A large number of Tibetans and well-wishers gathered at the main temple in Dharamsala to offer prayers for Kunchok Tseten, a 30-year-old father of two children, who died after setting himself on fire in northeastern Tibet's Ngaba region to protest against China's repressive rule.

"We offer our deep condolences for all those Tibetans who have sacrificed their lives for the cause of Tibet and express solidarity with their family members. Over 123 Tibetans have set themselves on fire in Tibet calling for the return of His Holiness the Dalai Lama to Tibet and freedom for Tibetans. 106 of them have died. These are not just numbers, but precious human lives. We must strengthen our unity and make concerted effort to fulfill their aspirations," Sikyong declared at the prayer service.

The only way to end this brutal and grave situation is for China to change its current hardline Tibet policy by respecting the aspirations of the Tibetan people, stated Dr Sangay. (CTA White Paper on Self-Immolations in Tibet)

The Central Tibetan Administration has consistently appealed to and discouraged Tibetans from taking drastic action, including self-immolation, as a form of protest. The CTA believes the blame for the self-immolations, as well as the solution, lies with the Chinese government.