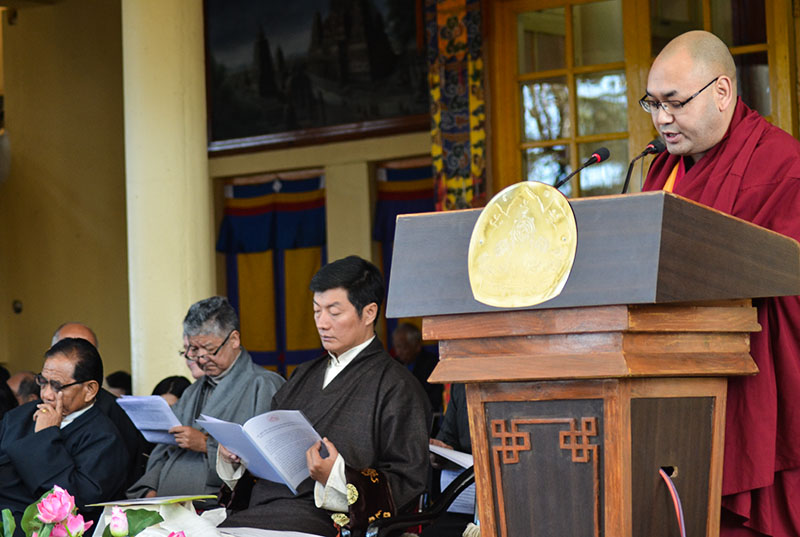 Dharamshala: – Speaking on behalf of the Tibetan Parliament in Exile (TPIE), Deputy Speaker Khenpo Sonam Tenphel expressed concern that "the Chinese government's ongoing disregard for the religious and cultural rights and freedom of speech of the people of Tibet" has failed Tibetans, the international community, and even China's own people.

Mr Tenphel made the speech amidst Tibetan celebrations for World Human Rights Day, which falls on December 10, the day on which His Holiness the Dalai Lama "received the universally acclaimed Nobel Peace Prize." This year's celebration marked the 24th anniversary of the occasion on which "all people across the world who covet democracy, freedom, and peace exalted him (His Holiness) and expressed elation, reverence and admiration for His outstanding deeds." Traditional Tibetan dances and songs contributed to a joyous atmosphere of celebration during the midweek holiday.

The speaker indicted the Chinese for their continued inaction despite international criticism. "The representatives of Canada, the Czech Republic, France, Germany, New Zealand, Switzerland, the United States, The United Kingdom, Iceland, Japan, Poland, and Australia made it clear that the human rights situation in Tibet was continuing to worsen considerably and expressed serious concerns over the development." He continued: "They made emphatic criticisms over the Chinese government's ongoing disregard for the religious and cultural rights and freedom of speech of the people of Tibet. Besides, they offered specific recommendations on the ways in which the government of China should ensure the protection of the rights of the ethnic minorities, including the Tibetan people, and urged that these be acted upon."

But after these repeated and explicit condemnations from the global community, "The government of China has thus far nothing positive to show in terms of accomplishments in the area of human rights." The Deputy Speaker expressed hope in the human rights promises China has made in order to rejoin the United Nations Human Rights Council, but also used his speech on Tuesday "to ask China to implement its promises and also urge the international community to closely scrutinize China on this issue."

Continuing on to focus on the Tibetan people, the speech specifically cited the Chinese Communist Party General Secretary of Tibet Autonomous Region, Mr Chen Quanguo. Mr Tenphel described Mr Quanguo's comment, "we should educate and guide cadres and ordinary people of various ethnic groups to separate Tibetan Buddhism from the fourteenth Dalai Lama," as another manifestation of the endemic oppression of Tibetans at China's hands.

However, TPIE's address then moved into a position less common, by arguing the Chinese government is doing a disservice to the Chinese people themselves. The "resolute policy of deceiving people with the monetary temptations to whatever extent it can on the one hand and with a brutally violent repression through use of troops and arms on the other hand" shows the world – including the Chinese Han ethnic majority – "that the communist party government of China is totally backward: out of step with the rest of the world today in every respect and not in keeping with the transformations that have taken place in modern human society."

In a particularly explicit statement regarding the Chinese population, the speaker noted, "There is no trace of the moral ethics, nor a slightest whiff of the virtuous traditions and culture of the great ancient Han Chinese people remaining in this (the Chinese) government. This represents an enormous loss to the people across the world and, especially, to the entire 1.3 billion people of China today."

Mr Tenphel closed by thanking Tibet's partners around the globe for their efforts thus far, and encouraging them to offer more support in the future. He then wished His Holiness the Dalai Lama a long life, and expressed hope for a day when Tibetans in exile can be reunited with their families and friends.