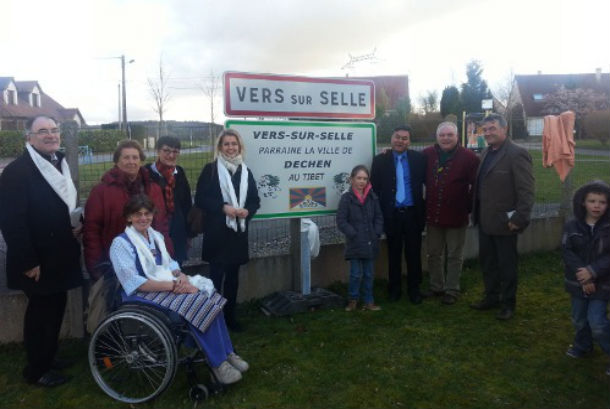 Paris, 24 February: - Vers sur Selle, a small French municipality in the Picardy region of north France became on 22 February, the 63rd municipality in Europe to adopt Tibetan towns and villages.

According to the Central Tibetan Administration, an official ceremony to celebrate the "adoption" was organised at the Town-Hall of Vers sur Selle attended by the Mayor, the members of municipal council and other dignitaries including representatives of the regional council and Tibet Support groups.

In his statement, the Mayor Mr. Thierry Demoury informed about the unanimous decision of the municipality council displaying the expressed feelings of the local people to support the Tibetan people's basic rights to freedom and justice.

The resolution also reiterated to fly the Tibetan flag permanently in the town-hall.

Following the ceremony Tibet, le mensonge chinois ? (Tibet : the Chinese lies ?) a documentary by Bernard Debord was screened along with an under-cover report from Lhasa by France24 TV reporter Cyril Payen titled "Seven days in Tibet".

The Secretary of Bureau du Tibet, Tsering Dhondup spoke on the current situation inside Tibet and answered the questions posed by the audience. Central Tibetan Administration produced French version of What's China doing in Tibet, a documentary on the series of self-immolation protest against Chinese repression in Tibet was also screened during the occasion.