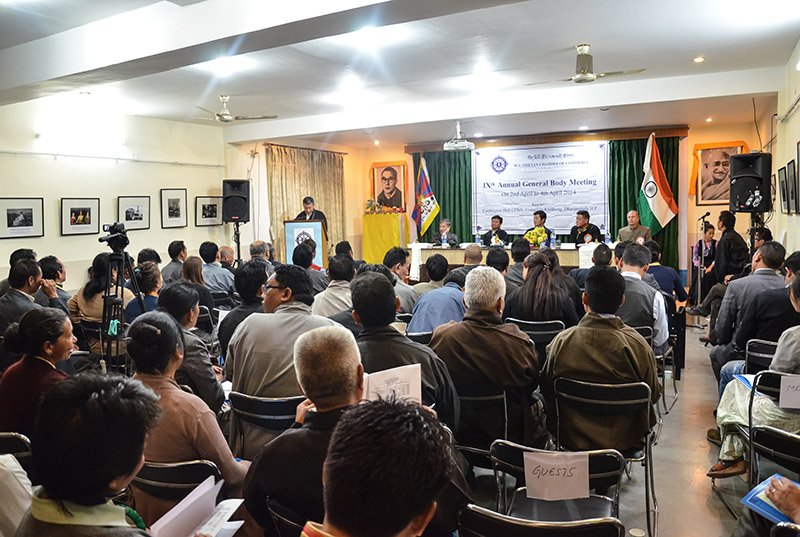 Dharamshala: - The Sikyong on Wednesday opened the 9th annual general body meeting of the Tibetan Chamber of Commerce, the first association of Tibetan businessmen in exile.

Dharamshala: - The Sikyong on Wednesday opened the 9th annual general body meeting of the Tibetan Chamber of Commerce, the first association of Tibetan businessmen in exile.

According to the Central Tibetan Administration official media "Tibet Net", the inaugural session was attended by over 80 members of the association including; Mr Penpa Tsering, Speaker of the Tibetan Parliament-in-Exile, Mr Tsering Dhondup, Kalon of finance department and Mr Ajay Singh Mankotia, President of Indo-Tibetan Friendship Association, Dharamshala. The members from various parts of the world including India and Nepal are participating in the three-day meeting being held at the LTWA auditorium, Dharamshala.

The chamber was formed with the aim of undertaking promotional activities to enhance the business interests of its members and support entrepreneurship in the Tibetan community. It currently has over 233 members from diverse groups of business including carpet manufacturers and hoteliers to tours and travel agents.

In his inaugural address, Sikyong Dr Lobsang Sangay talked about unity, innovation and self-reliance, the three guiding principles of the 14th Kashag. He extolled the efforts of the Tibetan Chamber of Commerce to create a robust, self-reliant Tibetan community based on economic growth and prosperity.

Lamenting the prevalence of dependency syndrome in some parts of the society, he expressed that dependency on others for everything is the major cause of problems faced by people in under-developed countries. He urged the Tibetan people to work hard and honestly on our own strength to create a self-reliant society, adding that, even though, we are dependent on world support for our political struggle, an ideology based on self-reliance is crucial for our movement.

Sikyong Dr Sangay added that even in the field of business you need proper education to succeed. Education is crucial to develop your capabilities and maximise the profit margin of your business. He called upon the Tibetan people to invest in education of the Tibetan children and cited examples of countries including Israel, Japan and Singapore where investment in education has brought them prosperity and global respect.

Explaining the current demographic situation in exile, Sikyong said: "we must bear in mind that the year 2020 will mark 70 years since the invasion of Tibet by China. By then, the generation of Tibetans with memories of a free Tibet will have greatly dwindled. The next generation of Tibetan leadership inside and outside Tibet has to cope with a crucial and challenging reality. Tibetans inside Tibet will have no personal memories of traditional Tibet, while Tibetans outside of Tibet will know only a life lived in exile."

Mr Penpa Tsering, Speaker of the Tibetan Parliament-in-Exile discussed the privatisation of the enterprises owned by the Central Tibetan Administration during the 12th Kashag which led to the formation of the Tibetan Chamber of Commerce, to boost private ownership and economic growth in the Tibetan community.