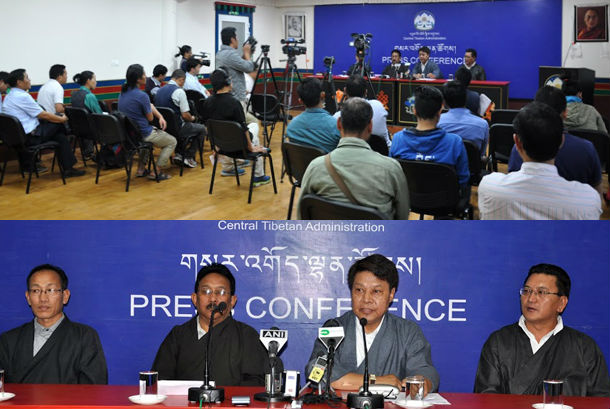 Dharamshala: The Central Tibetan Administration will observe 2014 as the "Year of His Holiness the Dalai Lama" to express deep gratitude to his remarkable achievements for the cause of Tibet and promote his ideals of non-violence and human values.

"The Kashag and the Central Tibetan Administration have dedicated 2014 as the year of His Holiness the Dalai Lama to celebrate, pay tribute and express gratitude of the Tibetan people for the all achievements and blessings that he has bestowed on us till now," said Mr Tashi Phuntsok, co-chairman of the organising committee and secretary for the Department of Information & International Relations, said at a press conference.

"This declaration was made by the Sikyong in his statement on 10 March this year and subsequently in the Parliament. The Kashag then formed a committee to organise events to mark the occasion," he added.

He said 25 events will be organised in Tibetan across the world to celebrate the year from June to December. The departments of the Central Tibetan Administration involved in organising the events are Religion and Culture, Home, Education, Department of Information & International Relations and Health.

He said Nobel Peace laureates would be invited to grace events in Dharamsala and Delhi on the occasion of the birth anniversary of Mahatma Gandhi on 2 October. "These events will be organised on Gandhi Jayanti to express appreciation for His Holiness the Dalai Lama's commitment to promote non-violence and dialogue to resolve conflicts," he added.

Another key event for the year is the celebration of the 25th anniversary of the conferment of Nobel peace prize on His Holiness the Dalai Lama on 10 December.