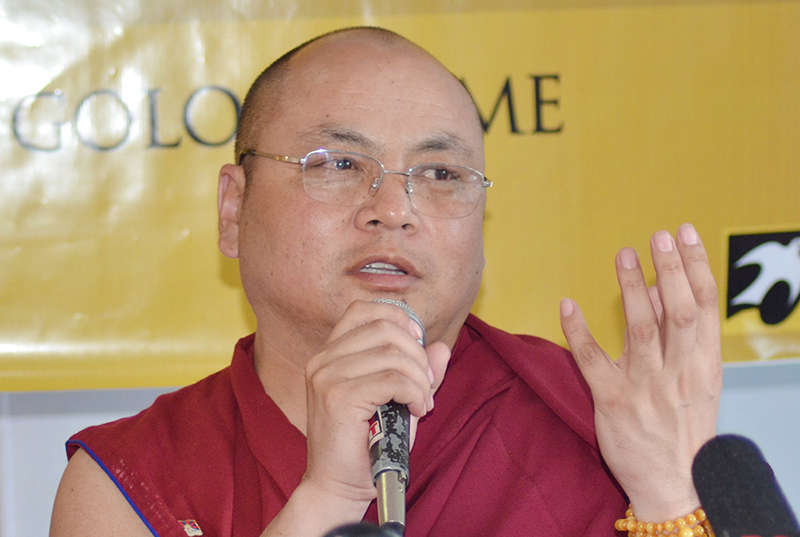 Dharamshala: - The Tibetan 'information hero', Golok Jigme who recently escaped from Tibet said that the 99% of Tibetans inside Tibet support the Middle Way Approach to solve the Tibet issue, but China is making allegations against His Holiness the Dalai Lama that Tibetans are not accepting his Middle Way Approach.

Golok Jigme spoke at a press conference held at the Hotel Tibet in Dharamshala on Wednesday [28 May], jointly organised by Tibetan Centre for Human Rights and Democracy and Swiss-based 'Filming for Tibet.'

The Tibetan monk has praised the reporters present for their truthful approach for his safe escape. "I am very happy to see all the reporters as I feel relieved after safely arriving in India. I feel it was a dream and was overjoyed that it was in fact reality."

'I am Golok Jigme, and I was born in Sershul County in Amdo Province, eastern Tibet. My father's name is Topden and my mother's name is Zamdon, I have four siblings. I became a monk when I was 15 and I did Tibetan Buddhist Monastic Studies at Tashichil Monastery until 2008,' he told the reporters and audience by giving an induction of himself.

'The Chinese have cracked down on Tibetan identity and culture, denying them to preserve their language and practice their own religion. Tibetans are forced to participate in the Chinese Patriotic Re-Education Campaigns. There is widespread environmental destruction, marginalising the Tibetans in economic, educational, political and social spheres and stifling the true aspirations and sufferings of the Tibetan people, these are some of the major grievances of the Tibetan people inside Tibet.

"His Holiness the Dalai Lama repeatedly reiterated that he was committed to the spirit of the middle-way approach for the sake of the mutual benefit of the Tibetan and Chinese people to solve the issue of Tibet and 99% of Tibetans inside Tibet support this notion, but the Chinese government make allegations against the Tibetans that they are not accepting the Middle Way policy," Jigme said, adding that China is trying to give a negative response to the Middle Way Approach. And when we do not accept the Chinese government policy and Communism as the way forward in the world, they forcefully take our lands away from us. This is why I wanted to protest against the government."

Explaining his service to the society, 'For example, Dhondup Wangchen and I took interviews discretely from members of the public and recorded their responses which created 'Leaving Fear Behind.'

"The Chinese government is always aiming at wiping out the Tibetan identity and its rich culture. Always against Tibetans to preserve the use of Tibetan language, whether it be big or small and these are witnessed everyday by Tibetans but are never allowed to speak publically about what has taken place," Jigme stressed. He keeps saying that's why in 2008 the three provinces of Tibet, (Amdo, Kham and U-Tsang) came together to protest for being forcefully silenced against the agonising situation that continues in Tibet.

He then went on to talk about his imprisonments and tortures, he was imprisoned three times while he was protesting against the Chinese government policy toward Tibetans. He was first arrested on March 23, 2008, until October 15, 2008, where he was brutally tortured, causing serious injuries including broken ribs, a dislocated shoulder and damaged knees.

"I was first arrested and jailed in 2008 for assisting film maker Dhondup Wangchen in the making of the documentary "Leaving Fear Behind". He was accused of taking part in violent protests against the Chinese government policy and not making defamatory statements against His Holiness the Dalai Lama," he said.

"When I was first arrested, my hands and feet were shackled and I was tied hanging for 10 hours. Later, I experienced similar torture seven times, which often lasted between 2 to 5 hours. Even today I continue to have severe pain on the backbone and ribs and my knee dislocates whenever my body gets cold," jigme added.

Jigme was briefly released after his first arrest, however, remained under house arrest and constant surveillance. He was re-arrested and imprisoned under false charges, including inciting self-immolations in Tibet and sharing state secrets with outside forces. 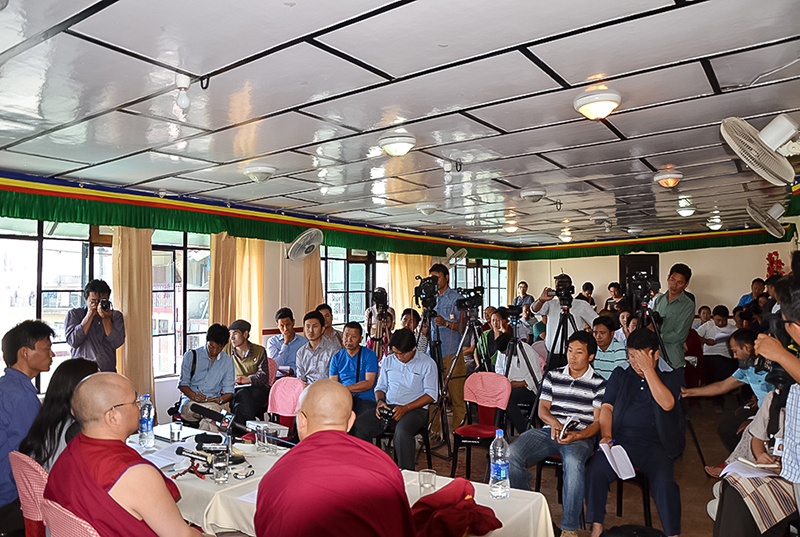 During his third imprisonment, Chinese prison authorities tried to coerce him to visit a hospital for some medical check ups. It was later discovered that they were planning to kill him through false medications, which prompted him to escape from prison.

"After learning their plan to kill me, I decided to escape. On 30 September I slept at 8 that night. Of the two guards, one had to leave early for an urgent matter and the other slept at midnight. After praying to His Holiness the Dalai Lama and with some efforts, I was able to free myself from the chains. I noticed how other guards were busy playing Mahjong. As I proceeded towards the main gate, I felt lucky to find it open. At once, I ran out of the gate," Jigme said.

However, after escaping from prison, he discovered that the Chinese authorities had accused him of murder, announcing a huge cash reward for information about his whereabouts.

"For two months I ran and hid across the mountains, after which I was shocked to find that the Chinese Government has blamed me for murder. They had announced a reward of 200,000 RMB for information on my whereabouts. The Government never made such an accusation before when I was in their custody and I never had any intention of killing anyone. I then thought of protesting this false allegation by setting myself on fire at one of the police stations in Gansu or Sichuan."

"However, after careful consideration, I decided not to proceed with the act: I felt perhaps because they were ashamed of my escape that they had to make such allegations; if I set myself on fire they would only continue to defame me by making such unimaginable allegations. But if I were to live I could continue to be of service to the cause of Tibet, and thus I changed my mind," he further added.

For one year and eight months since his escape from the Chinese prison, Jigme hid across mountains, rivers and forests. He had been on the run until his arrival in Dharamshala, India.

Jigme's social activities in Tibet including his assistance in filming 'Leaving Fear Behind' was widely recognised. He appreciated that he was recently listed among '100 Information Heroes' by Reporters Without Borders on World Press Freedom Day.