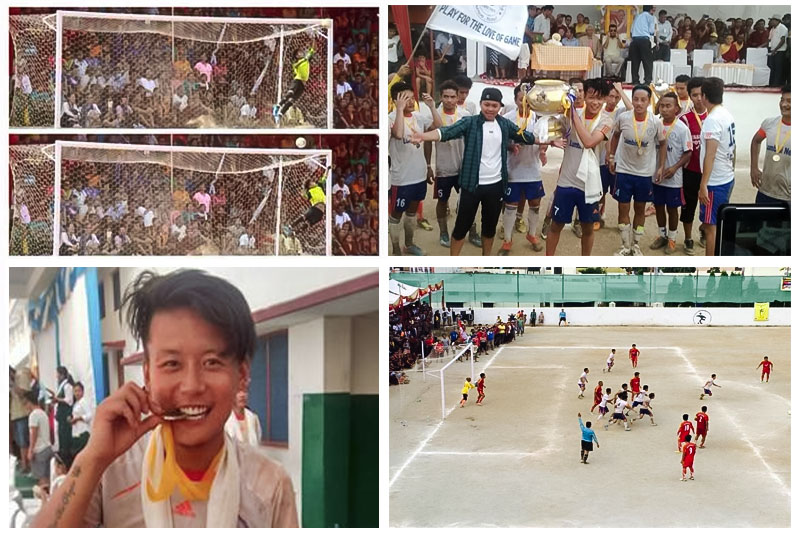 Dehradun: - The 20th Gyalyum Chenmo Memorial Cup, the biggest football tournament in exile, was held in Dhondupling (Clementown), Dehradun this year. 27 teams from various Tibetan settlements in India participated, out of which 21 qualified for the tournament.

The teams reported at Dhondupling on 2nd June and the managers, coaches and captains met with the tournament officials the next day. The opening ceremony was held on 4th June, after which the opening game commenced between Manduwala FC and Dhondupling team A, ending in a 2-0 victory for the latter.

The teams had been divided into 7 pools, A-G. The tournament proceeded with the top team from each pool progressing into the quarter finals, where 8 teams played. The semi final was played Dhondupling FC Team A v/s Gulladhala FC and Pokhara FC v/s Mundgod FC. Dhondupling FC stormed into the finals with a 2-0 win over Gulladhala FC as Pokhara FC matched their feat with two goals to nil against Mundgod.

Dhondupling also got to observe a friendly match between the Tibetan National Women's football team and the women's team from Dehradun's Football Academy. The result was a disappointing 5-2 for the Tibetan Women's team, yet an impressive display of football and sportsmanship from both teams.

The fan favorites Dhondupling FC, who were playing on their home ground had the locals for their support as the match kicked off on 15th June. The match was an exciting display of football with both teams almost equally matched, but Dhondupling failed to convert their chances into goals. The first blow came in the first half as Pokhara's Dhudul scored. Dhondupling FC's attempts at goal were thwarted by unimpressive shots and Pokhara defenders as the second half progressed. Pokhara's striker Norbu Dorjee sealed their victory with a clinical finish and the match ended 2-0 for the disappointed home team.

The closing ceremony was held after the final match, where the winning team lifted the GCM cup once again after 11 long years. Awards followed. With Mundgod FC recieving the Fair Play Award and Pokhara's goal machine Norbu Jinpa announced the top scorer with 9 goals under his belt.

The 20th GCM was an event that put forth Tibetan's love for football, as fans from near and far came to watch the matches. Others kept themselves updated on social networking sites such as Facebook, where a popular, page, "GCM" put up commentary, pictures and videos of the tournament.