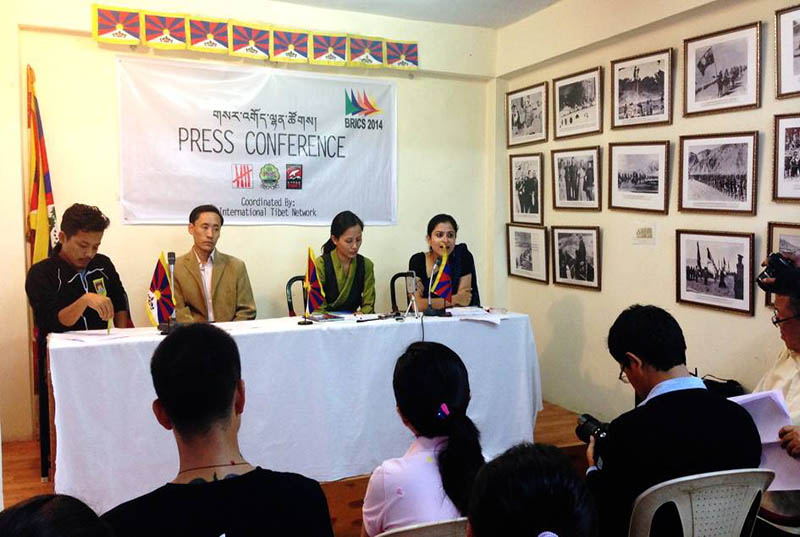 At the commencement of the BRICS Summit in Brazil on Tuesday, July 15th, three Tibetan NGOs- Gu Chu Sum Movement of Tibet, Tibetan Women's Association and Students for a Free Tibet-India held a press conference at the Gu Chu Sum Office in Mcleod Ganj, co-ordinated by International Tibet Network.

"The situation in Tibet is critical. Since 2009, at least 130 Tibetans in Tibet have set fire to their bodies in acts of protest against China's brutal Tibet policies, each of whom have called for freedom and for the return of His Holiness the Dalai Lama," the Tibetan NGOs said in a statement.

"The majority of these protesters have died, whilst the whereabouts of most of the survivors is unknown. Many monasteries have been shut down and Tibetans are routinely harassed by the authorities in the streets, in their workplaces and in their homes," they said, adding: "As China's escalating repression in Tibet continues to drive Tibetans to this drastic act, Tibetans and supporters are urging world leaders to team up and intervene to stop the crisis."

'The BRICS Summit is one multilateral forum for leaders of Brazil, Russia, India and South Africa to speak directly about the human rights crisis in Tibet with Chinese President Xi Jinping," they continued.

The NGOs also said they "take this opportunity to issue a joint statement to President Dilma Roussef, Vladmir Putin, Jacob Zuma and Prime Minister Narendra Modi to firmly raise the concerns of the Tibetan people with President Xi Jinping."

An animation video 'Tibet Solution: Pema's Appeal to World Leaders' made by Students for a Free Tibet was Screened at the press conference. "As concerned citizens, we urge you to adopt a new multilateral approach to address the human rights crisis in Tibet. When governments speak out individually, China reacts punitively and shuts down the discussion. But when like-minded governments join together, the Chinese government has no choice but to listen," Pema wrote on The Tibet Solution website.